After the successful first student UK and Republic of Ireland Programming Contest (UKIEPC) last year, the competition continues to grow.

The UKIEPC is a regional contest within the ACM International Collegiate Programming Contest (ICPC). 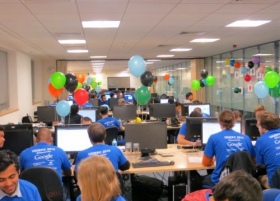 In this on-site programming contest, student teams from UK and IE universities were invited to participate at any of nine potential sites. Imperial College was the highest frequented site, hosting 24 of 67 participating teams.

Teams from seven other universities participated at Imperial, team ‘npmg’ from Glasgow being the furthest.

During the contest teams of usually three students faced the challenge to solve eleven algorithmic problems sharing one computer with no Internet access.

Special congratulations go to the excellent result of the three best student teams who will represent Imperial College in the upcoming Northwestern European competition (NWERC), which is held in Linköping University, Sweden in November.

Google, PayPal and EF supported the event with prizes and t-shirts. Two teams of Google engineers kindly participated ‘out of competition’.

Christian Ledig, who is an RA in the Department of Computing, runs the ICPC program at Imperial since 2011. Andreas Schuh, Jaap Eldering and Stefan Pszcolkowski support the program and the organisation of local contests.