Imperial welcomed Singaporean President Tony Tan Keng Yam to the College on Friday 24 October, marking the end of his four day State Visit to the UK.

During the visit Imperial's President Professor Alice Gast introduced President Tan to some of the College's many ties with Singaporean research, industry and higher education institutions at an exhibition hosted in the Main Entrance. 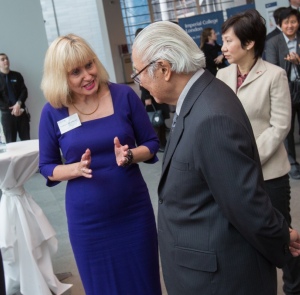 Imperial’s flagship collaboration with Singapore is the Lee Kong Chian School of Medicine (LKCMedicine), which was founded in partnership with Nanyang Technological University and welcomed its first students in 2013.

Professor Jenny Higham, Senior Vice Dean at LKCMedicine and Vice Dean of Imperial's Faculty of Medicine, said: “I was delighted to be able to highlight to President Tan our innovative work founding LKCMedicine in Singapore. The School recently accepted its second cohort of students, and we are especially proud of its technology-enhanced curriculum. We look forward to welcoming President Tan to LKCMedicine in January, where he will be attending the school’s foundation stone-laying ceremony.” 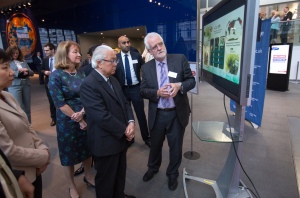 Imperial also recently announced a new academic partnership with the Singapore University of Technology and Design to boost cybersecurity research. Professor Chris Hankin, who is leading the collaboration on Imperial’s side, said: “The potential for collaboration with Singapore in the area of cybersecurity is very exciting, and is something we have worked hard to foster. The visit from President Tan is particularly timely - just after the College has strengthened its links with Singapore by signing a Memorandum of Understanding with the Singapore University of Technology and Design. This agreement will pave the way for joint research into new ways we can protect our infrastructure and critical services – such as energy and water - from cyber threats.” 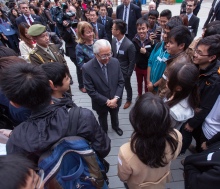 President Tan was also introduced to some of Imperial’s 400 full-time Singaporean students during his visit, who together make up one of the largest groups of international students at the College and the highest proportion of Singaporeans at any UK university.

Mr Clive Aw, President of Imperial College Singapore Society, was among those to meet President Tan. He said: “This was once in a lifetime opportunity to meet our President, and it was very exciting that he took the time to talk to students as part of his first state visit to the UK."

“I was pleased to have the opportunity to tell him about the stage production that the Singaporean Society is planning to put on to celebrate the 50th Anniversary of our country’s independence next year. This will feature music, dance, acting and singing will be a fantastic celebration of our national culture and identity.”

It was an honour to meet the President of my country and an incredibly humbling experience.

PhD students Jasmeet Khara and Kevin Kahn are enrolled on a joint programme offered by Imperial and the National University of Singapore. The programme, which launched in 2010, offers students the opportunity to draw on the research facilities and expertise available at both universities as well as providing an opportunity to work in an international research context.

Jasmeet said: “It was an honour to meet the President of my country, and an incredibly humbling experience. He was very interested to hear about the PhD programme I am completing. The National University of Singapore is my home institution but I’ve spent the past two months working in London. Working across two institutions and two countries in this way is incredibly beneficial – I’ve been able to meet experts from a broad variety of fields which has opened my eyes to new ideas and ways of working across disciplines.” 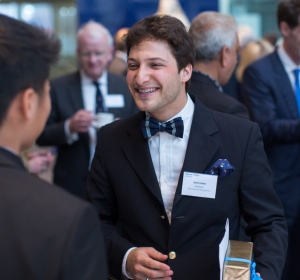 PhD student Kevin Kahn was among those to meet the President

Kevin said: “I’m based at Imperial but am moving to Singapore in January as part of the joint PhD programme, so it was wonderful to have the opportunity to meet the President before I embark upon that journey.”

In November 2013 Imperial joined a prestigious engineering programme designed for some of Singapore's very best students. The Nanyang Technological University’s Renaissance Engineering Programme (REP) selects the university’s 50 top engineering students to be trained as the ‘Engineering Leaders of Tomorrow’. The REP scholars spend four and a half years on an integrated programme that combines the study of engineering, science, technology, business, economics and entrepreneurship – spending a year of their course abroad at either Imperial or the University of California at Berkeley.

Renaissance Engineering scholar Ji Inn Wong said: “Meeting the President was a fantastic experience, and definitely a highlight of my time at Imperial. He took a real interest in the Renaissance Engineering Programme and I was delighted to tell him about my experiences. I’ve been in the UK since June and studying abroad has really broadened my horizons – giving me opportunities I wouldn’t get at home.” 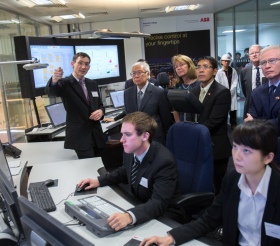 President Tan ended his visit with a tour of Imperial’s Carbon Capture Pilot Plant – the most advanced of its kind in the world.

Stretching over four storeys, the Carbon Capture Pilot Plant demonstrates best practice in capturing and storing harmful Carbon Dioxide (CO2) before it is released into the atmosphere, and brings together academics, students and industrial partners to test and develop new ways of capturing and harnessing CO2 emmissions. Developing such carbon capture technologies are national priorities for both the UK and Singapore.