If, like many people, you’ve been captivated by the landmark story of the first spacecraft to land on a comet, then Imperial alumnus Dr Matt Taylor (PhD Space Plasma Physics, 2000) may be a familiar face.

Matt’s charismatic interviews were a highlight of the live feeds from mission control during the anxious wait for Philae to touch down on the comet 67P/Churyumov-Gerasimenko as part of the Rosetta mission led by the European Space Agency (ESA). He also featured in the BBC’s Rosetta: a Sky at Night Special alongside fellow Imperial alumnus Maggie Aderin-Pocock (BSc Physics 1990, PhD Mechanical Engineering 1993) and in countless newspapers and magazine articles, translating complicated aspects of the mission into layman’s terms.

As Project Scientist for the Rosetta mission, Matt works as the interface between the dispersed international community of scientists responsible for the experiments on the mission and the ESA mission operation team. He is there, he says, “to ensure the science we want to do is done to the best of the capabilities of all entities involved.”

It’s amazing to be able to light up people’s eyes when you tell them what we can do in space and why. It reminds you that actually science is that cool.

Reflecting on the challenges of working on a project spanning more than a decade, Matt says focusing on the high level goals of the mission helps to keep him motivated - not to mention the buzz he gets from sharing the excitement of his work through media appearances and outreach activities.

“It’s amazing to be able to light up people’s eyes when you tell them what we can do in space and why. It reminds you that actually science is that cool,” Matt says. 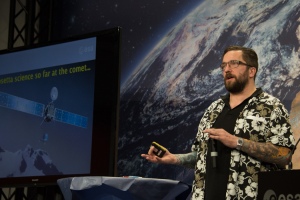 Matt in action during the live coverage (ESA)

Although the excitement of the landing has abated, the Rosetta project has in many ways only just begun, says Matt, as he talks about the start of the science phase of the mission: “We are full throttle in characterising the comet. It is mind blowing that we will be able to track changes in the physical appearance of the comet. Watch it change before our eyes. Next summer the comet reaches perihelion, its closest approach to the sun, and that's when the action will really kick off with 100kgs of material being spat out per second from the comet. It’s going to be a bumpy but exhilarating ride.”

The Imperial involvement continues too, and Matt is in frequent contact with Imperial scientists involved in the mission. This includes Dr Chris Carr, Principle Investigator of the Plasma Interface Unit on Rosetta, who is based in the College’s Department of Physics.

It was the strength and reputation of the Space and Atmospheric Physics (SPAT) group that convinced Matt that Imperial was the best place to complete his PhD in Space Plasma Physics: “I remember at my interview when asked why I wanted to do a PhD, I simply pointed at the interviewers, Professor Peter Cargill, Professor Michelle Dougherty and Dr Robert Forsyth and said ‘I want to do what you do. I want to be a scientist; I want to do science!’ Peter ended up being my supervisor - I was his first student. He quickly refined his selection criteria and his subsequent students were excellent!”

When asked why I wanted to do a PhD, I simply pointed at the interviewers, and said ‘I want to do what you do. I want to be a scientist; I want to do science!’

Matt describes the SPAT group as a world leader in its field, and credits his interactions with the scientists there for teaching him “how to actually do research”. Imperial, he says, is where he worked out how to get on with things, to be himself and to find encouragement and support from mentors and peers in the group. “This is part and parcel of PhD life,” he comments. “Imperial also taught me how cool space plasma physics is and that magnetic fields are more than just wiggly lines. Just ask the magnetometer teams in SPAT.”

It was here that he also started to learn the importance of collaboration, while working on a model that was to be applicable to the ESA Cluster mission, which investigates the Earth's magnetic environment and its interaction with the solar wind. Following a number of post-doctoral positions in the UK and the US, Matt gained a position in ESA working on the Cluster mission, eventually ending up as Project Scientist of that mission for a number of years. “For me the Project Scientist role, which I still perform, is primarily about collaborating (or driving collaboration) and ultimately facilitating science,” he said. “So I may not have become a scientist at the level of my PhD interviewers, but I have gotten to a position where I help scientists do their science, which is a great feeling.”

And what’s next for Matt? “I’m not sure. I still have lots to do on Rosetta - that will keep me very busy for a good few years. After that, maybe I can put my feet up for a couple of weeks, but I doubt it. I may get involved in the next set of M class mission proposals, maybe I’ll dabble in the JUICE mission, which will explore Jupiter and its icy moons. Let’s see what happens, but for now, it's all about Rosetta.”

Catching a comet at Festive Fringe

Harpoon yourself a comet for Christmas with the researchers who worked on the Rosetta mission and take the Philae lander down to comet 67P.

Dr Marina Galand and Dr Chris Carr, from the Department of Physics, will be appearing in the activity 'Catching a comet' at Festive Fringe on Thursday 11 December.