Students from one of Imperial's Centres for Doctoral Training have teamed up with Ocado to create tools to improve the teaching of coding in schools.

The students activities formed part of their first year MRes group project and were drawn from Ocado’s portfolio of outreach programmes.

Dr Ben Glocker from the Department of Computing said: “We wanted to incorporate an outreach aspect to the MRes projects instead of a more traditional lab-based question. We have a long established relationship with Ocado Technology through their role as a host of student placements and as a graduate employer so we thought that working with them would be the ideal way to do it.” 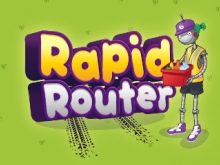 The students worked with Ocado on two of their computing projects that sit within their Code for Life outreach initiative, ‘Bots for Kids’ and 'Rapid Router', looking to develop the projects further and improve their functionality in the classroom.

Ira Ktena and her group worked on enhancing the ‘Bots for Kids’ project, developing new functionality for their 'Smart Supplier Robot' - a device which can be programmed to recognise and collect different objects within a mapped out area.

We wanted to incorporate an outreach aspect to the MRes projects instead of a more traditional lab-based question.

Ira said: “We wanted to create something with an educational value. With this robot project we were able to use our skills and knowledge to expand the different functions the robot could be programmed to do - expanding the skills that can be taught to the children on the programme.

“It was a really interesting project to work on and I hope our work will be taken forward and used in schools. I’d love to go along and see the new robot in action one day.”

Eric Seckler and his team further developed the  on the ‘Rapid Router’ app, which requires the user to programme the route of a delivery van while tackling a number of challenges and obstacles along the way. 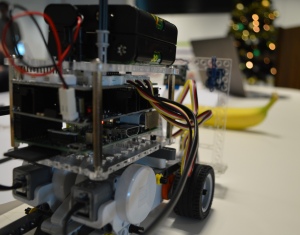 Eric said: “The Rapid Router game teaches children simple programming concepts as they attempt to direct the delivery van. We introduced the concept of unexpected behaviour to the game – creating a cow that can cross the road at random in any point of the game. That new challenge of event handling added an extra dimension and complexity to the game for the children to tackle.”

Following the 12 week project the students presented their final ideas in an exhibition to Ocado Technology staff.

It was a really interesting project to work on and I’m so pleased our work will be taken forward and used in schools. I’d love to go along and see the new robot in action.

Anne-Marie Neatham, Ocado Technology’s Chief Operating Officer said: “Code for Life has enabled the engineers at Ocado Technology to share our enthusiasm and vision with the next generation of technologists. It has also provided us with a great opportunity to work more closely with the postgraduate students at Imperial as we continue to grow the Code for Life application.”

Last month Ocado announced it planned to adopt the improvments to the Rapid Router project developed by Eric and his group. The students have begun sharing their code with Ocado to build their advancements into the design.

Dr Glocker said: “It’s great to see that the students' project are being taken forward by Ocado. Knowing they are going to be built in to the programme is really exciting. We’re really keen to continue with these kinds of projects developing computer science in schools helping to teach and inspire the next generation of computer scientists.”

The Code for Life initiative has been created by Ocado Technology to get every child in the country coding.

At the heart of the Code for Life initiative is Rapid Router, a free comprehensive coding teaching resource, the first version of which is targeted at Key Stage 1 and lower Key Stage 2. The resource, which launched on 1 September 2014, features a fun and engaging educational web application and a series of lesson plans, unplugged activity guides and coding careers videos.

Based on one of the many complex challenges Ocado Technology faces on a daily basis (delivery routing), the app aims to highlight the everyday application of coding while helping teachers meet the requirements of the new curriculum. It forms the first in a series of educational resources being created by Ocado Technology based on real life challenges within its business to inspire young people to take up a career in computer science.

With plans to develop the initiative further, Ocado Technology partnered with Imperial College Centre for Doctoral Training postgraduate students as part of their first year group projects, exploring new ideas to expand the web application and the robotics strand of the initiative, Bots for Kids, which allows children to further explore applications of computer programming, which is currently under development.