Around 200 people stepped into a replica animal house at a unique event held to launch Imperial's first annual report on animal research.

The 30-page report gives an overview of how animal research is conducted at the College and outlines changes made over the last year to reform our ethical and welfare review process, the governance framework and our approaches to refining, reducing and replacing animals in research (known as the 3Rs).

The public event, part of Imperial’s Fringe series, also gave visitors the chance to quiz the vets and technicians who care for animals at the College, and to hear from scientists and doctors about how and why animals are used in research. 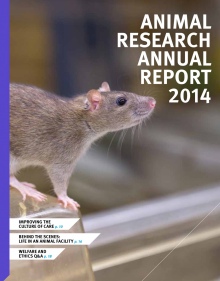 The annual report is now available to download or read online. It contains a look behind the scenes at one of Imperial’s animal facilities, and an interview with a Home Office inspector, as well as a progress report on how the College has delivered on the action plan it published last year.

At the Fringe event, researchers demonstrated how they are working to reduce, replace and refine the use of animals in science. In one exhibit, visitors were able to peer down a microscope to see beating heart cells produced from human stem cells which are being used as an alternative to animals to study the effects of possible treatments for heart conditions.

Other exhibits demonstrated how and why mice, rats, fish and other species are still used in research to improve human and animal health. In one example, scientists explained how their work with mice and zebrafish has revealed the way cholesterol could be irritating the lining of the gut contributing to irritable bowel disease.

In another, researchers discussed how research with amphibian species in the laboratory and in the field is helping with efforts to save frog species around the globe from a deadly, skin-eating fungus. 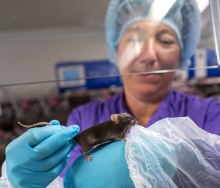 The Fringe was preceded by a series of talks aimed at others funding or working in animal research, which was attended by 100 representatives from 30 different organisations.

Professor James Stirling, Provost of Imperial College London, said: “These events and the publication of the animal research annual report are extremely important milestones for the College. It’s pleasing to have so much to say about how we carry out research at Imperial and how we are building on our strengths in animal welfare and the 3Rs to become a world-leader in this area.

“In particular, I am proud to see technicians, vets, scientists and communications staff working together as a community to help us meet our commitment to being more open about animal research.”

In May 2014, Imperial was one of 72 UK organisations to sign up for the Concordat on Openness on Animal Research, an agreement to communicate more frankly and more widely about research involving animals.

For an hard copy of the Animal Research Annual Report 2014, email animal.research@imperial.ac.uk