Bioglass expert celebrates international honour and chats about his research An Imperial academic, recognised internationally this month, talks about how a material, similar to window glass, has the healing touch.

Professor Julian Jones has been made a Fellow of The American Ceramic Society, a leading organisation for the technical ceramics and glass community. He is only one of 16 academics from around the world to be awarded a Fellowship this year.

Professor Jones, from the Department of Materials at Imperial, leads a research group of 23 post-doctoral researchers and PhD students. Together, they carry out research in the fields of advanced materials for regenerative medicine. Colin Smith talks to Professor Jones about what it means to be a new Fellow and he also explains how Bioglass can help the body to repair itself - from mending cancerous bone to soothing sensitive teeth.

What does it mean to you to be recognised as a Fellow? Does it open any doors? 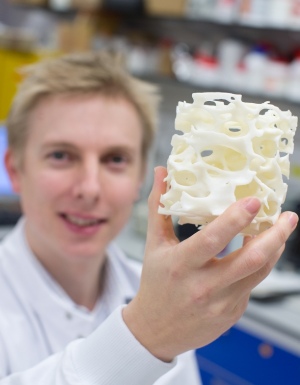 The American Ceramic Society is considered the premier professional body for the fields of ceramics and glasses and being made a Fellow means that the society considers my contributions to the field to be internationally leading. This recognition for my research and that of my research group’s achievements is great. It is an important measure of esteem that is noted when applying as a leader of large grant proposals.

One of your main areas of research is in bioactive glass? What is it?

Bioactive glass was invented by Professor Larry Hench while at the University of Florida. Years later, Professor Hench  became my PhD supervisor at Imperial. The material he developed  was the first to be found to form a bond with human bone and tissue. It is similar to window glass, except that its formulation causes it to dissolve safely in the body and it contains more calcium, which is beneficial for bones.

What makes bioactive glass so useful?

Bioactive glass can help the body repair itself by switching on natural repair mechanisms. For example when implanted into bone, it not only bonds to the bone but also releases active ions that tell the cells to make more bone. It revolutionised healthcare because its discovery meant that implant materials should not always be made to be as inert as possible, but should work with the body. Surgeons soon realised that the future was regeneration of tissues, rather than replacement.

Before bioactive glass was used in toothpaste to stimulate natural mineralisation of teeth, it was being used, and still is, by orthopaedic surgeons as a powder for healing defects (holes) in bones, for example, due to tumour removal, trauma, congenital defects or abscesses leaving holes in the jaw. It has been implanted in more than one million patients worldwide.

What other potential applications of bioactive glass in regenerative medicine?

Surgeons want it to be in the form of a tiny complex three dimensional ladder called a scaffold that can better guide tissue growth. In large defects, such as when cancerous tumours have been removed from bone, these scaffolds also encourage blood vessels to feed the new bone before the scaffold dissolves safely, leaving strong natural bone. However, applications are not just in bone. Bioactive glass fibres are also working well in healing wounds, such as diabetic foot ulcers, that would otherwise never heal.

A great benefit of a glassy structure is that large amounts of minerals important for the body called cations can be loaded into it. Those cations can be therapeutic, such as strontium, which treats osteoporosis; lithium, which is thought to relieve osteoarthritis, and cobalt, which accelerates blood vessel production. Drugs are usually taken orally, which causes the cargo to disperse systemically, which can cause side effects. Using bioactive glass can deliver ions at a slow sustained rate exactly where they are needed.

What research are you currently focusing on now?

We are also working on new therapeutic applications that can deliver active ions, vital to cellular activity, inside cells through the development of bioactive glass nanoparticles. Here, the material becomes the drug, which could ultimately lead to a reduction on the reliance of conventional pharmaceuticals.

With the advent of 3D printing, we are now able to build scaffolds in any shape or form, through our development of bioactive glass ink. Our surgeon collaborators, such as those in the Trauma Centre at St Mary’s, want bespoke scaffolds that can be made to order in the exact shape they need.