A 3D printer that can produce detailed models narrower than a human hair is helping experts in medical robotics at Imperial's Hamlyn Centre.

The technology, utilising the Photonic Professional GT machine by Nanoscribe and funded by EPSRC, is allowing researchers at the Hamlyn Centre to develop previously impossible medical therapies, devices and procedures. 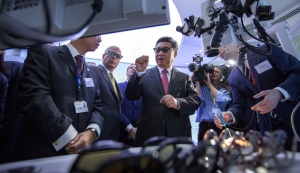 These include swimming microrobots for targeted drug delivery as well as ultra-small instruments for microsurgery. Thanks to the work of Hamlyn researchers and their collaborators around the world, these techniques could allow oncologists to deliver cancer drugs that operate like targeted missiles rather than affecting a wider part of the body. Eye surgeons could also benefit through the use of new nano tools for delicate operations to the back of the eye, minimising the risk of damage.

The Hamlyn Centre’s Director Professor Guang-Zhong Yang showcased the work to President Xi Jinping and other senior Chinese and British officials during their visit to the College on 21 October.

The Imperial researchers use a cutting-edge technique known as Two Photon Polymerisation, where a controlled point of pulsed laser is used to polymerise – in other words, joining together molecules – or solidify a liquid photoresist (a light-sensitive material). By moving a laser with great precision, a structure can be built layer-by-layer in the same manner as standard 3D printers, but at a nano scale.

The group can build 3D models and structures with advanced features as small as 150 nanometres – about the same size as the almost-invisible pits imprinted on CDs. This could help surgeons develop three-dimensional tools with force-sensing capabilities, giving tactile feedback, for use at a microscopic scale in surgery. When President Xi visited the Hamlyn Centre in October, he and the Duke of York were presented with gifts demonstrating this pioneering technique.

Maura Power, a PhD student supervised by Professor Yang at the Hamlyn Centre, explains, “A section of the Great Wall of China was printed on to a square of silicon at one millionth of its true scale. The section of wall is just over 100 micrometres long, which is the same as the width of a typical human hair. An image of the printed wall was acquired using a Scanning Electron Microscope. The length of the letters in this image are approximately the same diameter as that of human red blood cells. This microscope picture was mounted next to the silicon wafer in a frame which was wrapped in red ribbon and presented to President Xi by Professor Guang-Zhong Yang.

“For Prince Andrew, a panda leaping over a bamboo was printed to the tip of a needle and also presented in a small frame. The height of the panda is approximately 50 micrometres, or half the width of a human hair.”

The Hamlyn Centre’s work on microrobotics and microfabrication was made possible with funding from the Engineering and Physical Sciences Research Council (EPSRC). For more information on the EPSRC Micro-Engineering Facility at the Hamlyn Centre, visit their website.