A leading doctor from Imperial College London has won honorary fellowship of the West African College of Physicians.

The accolade, previously only bestowed on African presidents, has been awarded to Professor Simon Taylor-Robinson, from Imperial's Institute of Global Health Innovation. The professor won the award for his education and research work in TB, HIV, Malaria, Ebola and   Hepatitis B.

Professor Taylor-Robinson and his team helped implement training programmes across West Africa for doctors, nurses and health professionals, in treating and preventing the diseases.

"You often hear words like ‘unless I get HIV sooner I'm going to die’. So we're trying to find better ways of detecting cancer sooner."

The team helped run successful Ebola programmes in Nigeria and Senegal, which are now free of the disease.

“The award was an incredible honour,” said Professor Taylor-Robinson. “But above all, the biggest reward is realising your work may have made a difference to people's lives.”

The key to the success of the projects was close partnerships with the local community, says Professor Taylor-Robinson.

The team are currently undertaking ground-breaking work into Hepatitis B. The condition is a major cause of liver damage, and ultimately liver cancer – one of the biggest killers of young people in West Africa.

The problem is that Hepatitis B can go undetected for decades, explains Professor Taylor-Robinson, and by the time it is detected it is often too late.

“Most people in West Africa contract the condition as a new born during birth. It silently progresses in their body, and by the time they seek medical help they have tumours in their liver the size of footballs. And this is often in people in their twenties, thirties and forties.”

The liver damage can be prevented from progressing to cancer with an HIV treatment, called Tenofovir, but unless the patient also has HIV, these drugs cost around 8000 US dollars a year.

“You often hear words like ‘unless I get HIV sooner I'm going to die’. So we're trying to find better ways of detecting cancer sooner - and one of our ideas is to develop a urine dipstick test that detects whether someone has cancer.” 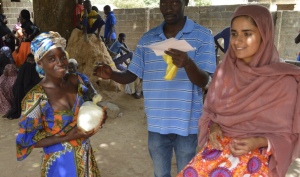 A traditional rice giving ceremony during one of the team's projects

The technology, which detect biomarkers associated with liver damage and cancer, is being developed in partnership with Imperial Innovations - Imperial's technology commercialisation company.

“Because the test would be incredibly simple, it could be rolled out all over the world, and potentially for different cancers. It could even be used in GP surgeries in the UK.

We have a fantastic team of many different experts, such as chemists and biochemists – and we’re all working together to try and make a difference.”