General relativity anniversary: the past, present and future of spacetime

As Imperial celebrates 100 years of general relativity, we look at the history, current research, and future direction of Einstein's famous theory.

Apples fall to the Earth. Planets go around the Sun. But by the end of the 19th century, it was clear that when examined in great detail, something was wrong with Newton’s theory of gravity – it did not always work.

Newton’s law suggests that bodies are attracted to each other, and the more massive the body, the stronger the attraction. With some simple rules, it was possible to calculate the orbits of planets precisely – except that Mercury’s did not fit the pattern.

On 25th November, 1915, Albert Einstein put forward the theory of general relativity. It was able to reproduce Newton’s notions of gravity and all its predictions of motion, but also fixed many of the discrepancies, including Mercury’s orbit.

The origin of spacetime

What Einstein proposed was that gravity as we experience it is a consequence of matter bending space and time, and that the two are intrinsically linked as ‘spacetime’. “In other words, spacetime is not a stage on which matter are actors, but that matter itself can warp spacetime by moving within it,” says Dr Toby Wiseman, a member of Imperial’s theoretical physics group.

There’s a certain rightness to the theory – it’s so logically complete, with so few assumptions.

Einstein had previously shown that the speed of light is always the same for everyone, and that space and time are experienced differently by different people. Time is just another coordinate – if space comes in three dimensions; length, breadth and depth, then time is the fourth dimension. Together they form the framework of spacetime, a revelation that formed Einstein’s theory of special relativity, posited 10 years earlier in 1905.

The discovery of a constant speed of light also meant that Newton’s laws of gravity violated the universal speed limit. If attraction between the Sun and the Earth was what caused gravity, then a shift in the position of the Sun would cause an instantaneous shift in the orbit of the Earth. But this shift would be faster than the speed of light – contradicting the findings of Einstein’s special relativity. General relativity married special relativity with gravity.

“There’s a certain rightness to the theory – it’s so logically complete, with so few assumptions,” says Imperial theoretical physicist Professor Fay Dowker. “It just seems so right. All the predictions it makes have been confirmed wherever they’ve been tested.”

How do we know general relativity is true?

Breakdown at the extremes

General relativity has been incredibly successful at providing a new way to understand the universe, and research into spacetime has yielded unprecedented insights into how our universe operates. But just like Newton’s theory, there are things it cannot explain

“General relativity is successful on a large scale, at the levels of planets and stars and everyday life. But at the extremes – with very strong gravitational fields and at exceptionally small scales – it breaks down,” says Professor Chris Hull, Chair in theoretical physics at Imperial. “Einstein’s general relativity is not the whole story.”

What takes over at these extremes is quantum theory, a set of rules for how matter behaves at the smallest scales. In the quantum world, the positions of particles are described in terms of probabilities rather than in certainties.

Quantum theory has been supremely successful in describing atoms and subatomic particles when gravity can be neglected. However, one of the biggest questions in modern physics is how to unite general relativity and quantum theory, into a theory of quantum gravity.

Experiments that probe the very large and very small together are hard to imagine, but some of the best laboratories for exploring the relationship, at least theoretically, are black holes. This is one of areas where Professor Stephen Hawking has made his name.

Black holes are regions of incredibly dense matter that bend spacetime so drastically that it rips. In this broken centre, called a singularity by physicists, matter is crushed to an infinite density, and quantum theory takes over its behaviour.

What happens if you fall into a black hole?

One of Hawking’s most famous revelations is that quantum effects at the horizon of a black hole – the point of no return for matter falling in – cause the black hole to have a temperature. “The discovery that black holes radiate energy and have a temperature and entropy is one of the most unified pictures we have of physics,” says Professor Dowker. “General relativity, quantum theory and thermodynamics are all brought together.”

Professor Dowker is one of five Imperial physicists who have worked in Stephen Hawking’s group. “He has always asked really fundamental questions, the deepest ones, the ones that appear too difficult to make progress on,” she says of her former PhD supervisor. “He is the most confident theoretical physicist – and rightly so.”

He has always asked really fundamental questions, the deepest ones, the ones that can appear too difficult to make progress on.

Professor Dowker is one of five Imperial physicists who have worked in Stephen Hawking’s group. “He has always asked really fundamental questions, the deepest ones, the ones that can appear too difficult to make progress on,” she says of her former PhD supervisor. “He has made contributions to our understanding of spacetime that are the stepping stones to a full understanding of quantum gravity.”

Now she studies quantum gravity, which she says is ‘more the name of a problem than a theory’. Quantum gravity is the hallowed link between general relativity and quantum theory, and she and others are trying to figure out what kinds of theories could work to make the link.

Professor Dowker works an approach to quantum gravity based on the hypothesis that spacetime is fundamentally granular or atomic. She and her co-workers believe these ‘atoms of spacetime’ could be the key to understanding the entropy of black holes.

Another approach to quantum gravity investigated by Imperial physicists is string theory – the idea that conventional particle physics, quantum mechanics and gravity can all be replaced by a theory using one-dimensional objects called strings. These strings have different vibrations that create all the physical effects we observe.

Professor Chris Hull investigates the idea that string theory requires extra dimensions of spacetime hidden from everyday observations. In this view, the spacetime in which strings vibrate has a total of 10 dimensions. 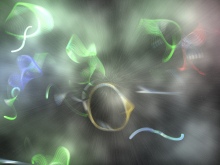 All these theories have a certain esoteric beauty and could work – but the next question is how to test them. The Large Hadron Collider (LHC) at CERN might provide some answers, as higher and higher energies are probed. One theory that could have some evidence backing it up within the next five years is supersymmetry - the idea that each of the particles we know about has a heavier ‘superpartner’.

The LHC has recently been re-started at twice the operating energy as when the Higgs boson was discovered in 2012, and this could be enough to uncover superpartners. If these exotic particles are found, there is a whole new world of physics to explore.

And if they are not, it does not necessarily mean they are not there – it is just that the energies are not high enough yet. “It took 50 years from the formulation of the theory of the Higgs boson before a machine was built that could find it. It could be an even longer wait for evidence that tells us whether or not string theory is right,” says Professor Hull.

In the meantime, what we do know about general relativity and spacetime can be used to explore the universe. “The whole of our modern understanding of cosmology comes from general relativity. It predicts the Big Bang and the expansion of the universe,” says Dr Wiseman. “It can also be used to tell us about things like the weight of distant galaxies, by analysing how light coming from them is bent.”

The Big Bang is also the ultimate laboratory for investigating the link between general relativity and quantum theory. At the birth of the universe, everything was infinitely dense and small, before bursting out into the myriad phenomena of matter, all of which warp and manipulate spacetime.

Spacetime and the quantum: united by history