Speaking from the gut: teaching awards and inaugural lecture Ten prizes are awarded each year by the School of Medicine to NHS clinicians at any grade and in any profession to recognise their valued contribution in delivering the undergraduate medicine course.

First held in 2003, this year saw eleven commendations (thanks to a joint prize) presented to NHS staff for excellence in clinical teaching by Dr Joanne Harris, deputy head of the undergraduate school.

The evening also included categories for supporting the student experience, personal tutor awards, a special ‘distinguished teacher’ prize, and the student recipients of the 2015 University of London gold medal and Betuel prize.

“What made this ceremony rather special was that each award was presented by students, who spoke about why they had nominated a particular teacher,” said Mr Martin Lupton, head of the undergraduate school.

“I was moved by the power of the bond that can develop between a good teacher and their student, and I wished that all our NHS staff could have heard what a profound effect good teaching can have on young minds and their experience.

The presentation of awards was followed by the inaugural lecture of gastroenterologist Professor Timothy Orchard, titled ‘Speaking from the gut’.

Professor Orchard and his colleagues are part of an international effort to make better use of metabolic analysis and genetics in the treatment of inflammatory gut conditions like ulcerative colitis and Crohn’s disease.

Drawing on his experience as both an educator and clinician, Professor Orchard’s lecture explored his career and research interests through a roll of role models, starting with his father—also a gastroenterologist—to present colleagues.

As well as his teaching and research roles, Professor Orchard is a consultant physician, gastroenterologist and director of the Division of Medicine at Imperial College Healthcare NHS Trust. Outside medicine he has a longstanding interest in choral music and is president of the School of Medicine music society.

“I still remember the first slide of the first talk I ever heard from Professor Orchard,” Mr Lupton commented on introducing him. “Professor Orchard is a hugely popular teacher, with our students saying ‘I want more of him’.”

Winners of the 2015 ‘Teaching Excellence’ Awards

Mr Salah Atrah, consultant orthopaedic surgeon for Hillingdon Hospitals NHS Foundation Trust, was nominated by student Hannah for his “energy and dedication” as well as his “debrief of football highlights”.

Dr Michael Malley, a third-year paediatric specialty trainee, was cited in absentia for his “inspiration and dedication”, while Dr Peter Wills, consultant respiratory physician for Hillingdon Hospitals NHS Foundation Trust, was nominated by Helen for making his students feel “involved and valued”.

GP Dr Caroline Oliver of Chartfield Surgery was awarded for her popularity with patients and students alike. Nominating student Soheil explained that her appointments are booked “literally instantaneously”.

Winner of the 2015 ‘Distinguished Teacher’ Award

The distinguished teacher category is only open to those who have already received a teaching excellence award and was created to recognise truly outstanding teachers who go above and beyond all expectations.

It was awarded to Dr Zulfiquar Mirza, consultant in emergency medicine at Chelsea and Westminster Hospital NHS Foundation Trust, who Dr Harris described as “something of a legend” in the medical school.

Winner of the 2015 ‘Supporting the Student Experience’ Award

Along with the teaching excellence awards, a ‘supporting the student experience award’ was presented to Karen Picken, teaching coordinator at Imperial College Healthcare NHS Trust, for her outstanding support of Imperial students.

Winners of the Personal Tutors Awards 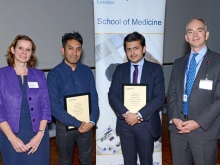 Students were given the opportunity to nominate personal tutors based on their practical advice and support over the academic year. Two awards were presented to Dr Sohag Saleh, senior teaching fellow, and Dr Amir H. Sam, head of curriculum and assessment development at Imperial and consultant endocrinologist at Imperial College Healthcare NHS Trust.

In addition to the teaching awards, two outstanding students were also recognised during the evening. All London medical schools—George’s, King’s, Queen Mary, UCL and Imperial—are invited to nominate a small number of newly-graduated students to compete annually for the University of London Gold Medal. The nominated candidates are selected by each school from those who obtained the highest number of merits and distinctions and have passed every examination at the first attempt—so the academic quality of those competing for the honour is extremely high.

The gold medal was awarded to Dr Rahul Ravindran with the Betuel prize going to Dr Ashik Amlani. Warm congratulations to them both.