The LISA Pathfinder launching atop a Vega rocket

The LISA Pathfinder mission successfully launched today, on its way to demonstrate technology for observing gravitational waves from space.

Gravitational waves are ripples in the fabric of spacetime, predicted a century ago by Einstein in his theory of general relativity. Einstein’s theory predicts that these fluctuations are generated by massive objects that can create large distortions in spacetime, such as supernova explosions.

Gravitational waves should pervade the universe, but they have not yet been directly detected because they are so small. For example, the ripples emitted by a pair of orbiting black holes would stretch a million-kilometre-long ruler by less than the diameter of an atom.

It’s an extremely challenging experiment that requires very high precision technology. The whole LISA team has created something exquisite, and it will be incredible to see it working.

Efforts to detect gravitational waves from the ground are hampered by interference from seismic disturbances. Only in space will it be possible to observe waves from the most violent events in the universe, such as mergers of two supermassive black holes each a million times more massive than the sun.

Even in space, non-gravitational forces, such as those produced by electric and magnetic fields, limit the sensitivity of a gravitational wave detector. The Laser Interferometer Space Antenna (LISA) Pathfinder will test the technology needed to reduce these forces to a minimum and observe gravitational waves from space.

At its core is a pair of identical 46 mm gold–platinum cubes separated by 38 cm, which will be isolated from all external and internal forces acting on them except one: gravity.

The cubes will be freely floating within a spacecraft containing all the supporting equipment. The satellite is designed to follow the motion of the cubes using thrusters so weak it would take thousands of them to lift a sheet of paper on Earth.

While the 38 cm between the cubes in LISA Pathfinder is not enough to discover gravitational waves at this stage, if it can be shown that the cubes can be isolated from all other forces it will pave the way for future missions.

If all goes to plan, the eLISA (evolved LISA) mission will launch in 2034, with three cubes millions of kilometres apart. Lasers between the cubes will measure their positions, waiting for gravitational waves to shift them by mere picometres (billionths of a millimetre).

A team of Imperial physicists have designed and built one of the isolation mechanisms for LISA Pathfinder. In space, cosmic rays will induce an electric charge on the cubes. The team have designed a system of ultraviolet lamps that discharge the cubes, cancelling out the effect of the cosmic rays. 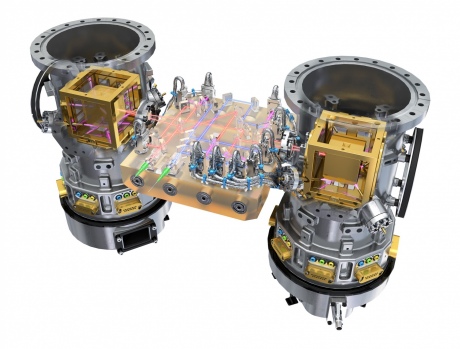 The Imperial team's UV lamps can be seen as the purple beams shining on the two golden cubes in this illustration from ESA.

Dr Peter Wass, a scientist from Imperial’s Department of Physics who was part of the team behind the mechanism, said he is thrilled to see 15 years of work come to fruition. “It’s an extremely challenging experiment that requires very high precision technology. The whole LISA team has created something exquisite, and it will be incredible to see it working.”

The LISA Pathfinder launched this morning atop a Vega launcher that lifted off at 04:04 GMT. The spacecraft separated from the upper stage at 05:49 GMT, when controllers at ESA’s operations centre in Darmstadt, Germany established control.

LISA Pathfinder will now travel to its operational location, orbiting around a stable virtual point in space called L1, some 1.5 million kilometres from Earth towards the Sun. It is expected to reach this orbit about 10 weeks after launch. After final checks, it will then begin its six-month scientific mission at the beginning of March. 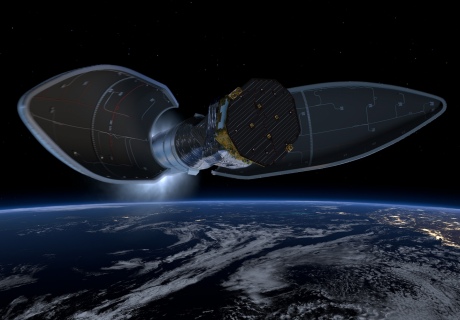 Illustration of LISA Pathfinder separating from the rocket. Courtesy of ESA.

En route to the final orbit, the two cubes will be released from the locking mechanisms that hold them during launch and cruise. Once in orbit around L1, the final mechanisms will be unlocked and the cubes will no longer be in mechanical contact with the spacecraft.

A complex system of laser beams bouncing between the two cubes will measure how close to true free-fall they are to within a billionth of a millimetre – a feat of precision never previously achieved in space.

“LISA Pathfinder takes on the technological challenges that will one day enable a full-scale gravitational wave observatory in space, venturing into the realm of unprecedented measurement accuracy,” said Johann-Dietrich Woerner, ESA’s Director General.

“This mission will make the first crucial steps to a brand new way of investigating the cosmos.”

Meet some of the LISA Pathfinder scientists at out next Imperial Fringe: It IS Rocket Science, Thursday 3 December from 17.00-19.30 in the College main entrance.