Weight loss, quitting smoking and giving up alcohol may be aided by gut hormones Scientists are investigating whether an infusion of gut hormones could help people to stop over-eating, quit smoking, or give up alcohol.

The team at Imperial College London are seeking volunteers to take part in their study, in which they are giving participants compounds that mimic the action of hormones naturally produced by our stomach and intestines. The hope is that these gut hormones, which help trigger feelings of fullness after a meal, can switch off cravings not only for high-fat, high-sugar foods - but also cigarettes and alcohol.

Researchers are increasingly realising that often people who are overweight can experience cravings similar to those experienced with addictions to cigarettes, alcohol or other drugs. One theory is that certain areas of the brain associated with cravings may be over-active when exposed to food.

Previous studies have shown that the two hormone systems being investigated in the new research, called glucagon-like peptide-1 (GLP-1) and ghrelin, not only alter appetite but also target the brain areas involved in addiction, reward and stress. These are the same brain areas involved in cravings - and so the team are investigating whether giving compounds that mimic these hormones can help reduce the urge to eat, smoke and drink.

Dr Tony Goldstone, from the Department of Medicine at Imperial College London, one of the leaders of the study, said: “Studies suggest that people who are overweight may also respond to stress by over-eating, or be more impulsive. These behaviours will predispose them to overeat, particularly foods high in fat and sugar. They may also find it difficult to stop eating when they are trying to lose weight – in much the same way that people find it hard to give up cigarettes when they are quitting smoking, or giving up alcohol when they have a drinking problem.”

Dr Goldstone is leading the Gut Hormone in Addiction study alongside Professor David Nutt, The Edmond J Safra Chair in Neuropsychopharmacology at Imperial.

In the study, volunteers will have three infusions of either hormones similar to GLP-1 and ghrelin, or a placebo infusion of salt water. There will be 90 participants in total – 30 will be overweight and trying to lose weight, 30 will be ex-smokers and another 30 will be ex-drinkers.

To test the levels of their cravings, the participants will undergo brain scans during the infusions. While in the scanner, they will be shown pictures of different foods – such as  pizza and donuts, and also images of alcohol and cigarettes. The scientists will then measure activity in the brain areas that contribute to cravings while the volunteers look at these images. 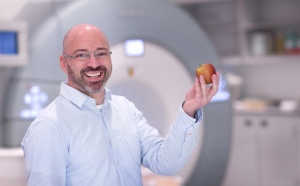 The team will investigate whether these hormones can reduce activity in the areas of the brain involved in stress. The hope is that when people are under stress, the hormones may help people avoid succumbing to cravings, and the urge to eat, drink or smoke. To test this, the volunteers will also look at mildly stressful pictures, such as images of people holding knives or guns. Their brain activity will then be measured.

If successful, the study could lead to future drug treatments for addiction, adds Dr Tony Goldstone: ”Obesity, smoking and alcohol dependence are major health burdens to society. In obesity, non-surgical interventions, such as diet and exercise programmes, have been disappointing in achieving long-term weight loss. Similarly with alcohol and smoking dependence, relapse is common when trying to quit. Therefore, there is a pressing need to develop new drug treatments for addiction. We hope this study may lead to these. Such a new hormonal approach may also have the added benefit of helping to prevent weight gain after people quit smoking. This is a common reason why people either do not want to stop smoking in the first place, or start smoking once again after they have given up."

For more details on the study visit  www.ghadd.co.uk, or email ghadd@imperial.ac.uk.