Lejon was chosen from among more than 3000 applicants to be part of the inaugural class of 111 Schwarzman Scholars, representing the world’s next generation of leaders; he will also be the first person from Singapore to join the program. The class will comprise of students from 32 countries and 75 universities. All of the students will receive a fully funded scholarship towards a postgraduate course in one of three disciplines – Economics and Business, Public Policy and International Relations.

Emeritus Professor David Nethercot, whose tenure as President of the City and Guilds College Association (CGCA) coincided with that of Lejon Chua’s as President of the City and Guilds College Union (CGCU) remarked, “This is a spectacular success by a student of our college and deserves to be celebrated.  Aside from his stellar academic achievements  in a department and university as competitive as this, he is also a remarkably mature, perceptive, tenacious, and decisive individual. Furthermore, he engendered enormous respect, gratitude and affection among the students as the CGCU was transformed under his leadership. Working closely with him was an absolute joy.” 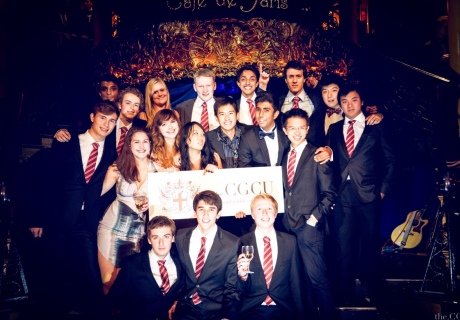 Dr Rongjun Chen - an alumnus of Tsinghua University himself and now a Lecturer in Chemical Engineering at Imperial - was supervisor to Lejon and his lab partner for their final-year research project. Speaking about his experience supervising Lejon, he said, “The work ethic was exceptional! In the narrow time frame of 11 weeks, they managed to produce research that was at a PhD level; in fact, I will be presenting their results at an international conference later this year. I’m very proud to have mentored him and I think this scholarship is definitely well-deserved for someone of his caliber”.

Among the many accolades that Lejon has received at Imperial, the BP Achievement Award, the Imperial Book Prize and the CGCA Student Activity Award, particularly highlight his all-round excellence in leadership, academia and humanitarianism. Presently, he is a manager with International Enterprise Singapore, grooming companies within the chemicals industry for global expansion. He will be heading to Beijing for the beginning of the inaugural Schwarzman Scholars program this summer.

The Schwarzman Scholars program is modelled after the similar Rhodes Scholarship, but with a greater focus on the role of China in the geopolitical landscape of the 21st century. The course will aim to give future leaders of the world an appreciation of China’s impact on global trends, especially in business, science and politics. The students will live together and study on the newly built Schwarzman College campus in Tsinghua University. The founder of the program, Stephen A. Schwarzman, who is co-founder and current chairman of the asset management firm Blackstone Group, said that the program would offer unparalleled networking opportunities for the scholars, as they get to interact closely with world-renowned foreign ministers, business and political leaders, entrepreneurs, scientists, thought leaders and cultural luminaries.His goal is to establish a $450 million endowment that would fund up to 200 students every year. Mr. Schwarzman, who according to Forbes is worth $9.6 billion, has personally contributed $100 million and has raised another $275 million from foundations and corporations including BP, Dow Chemical and Credit Suisse.

Please join us in congratulating Lejon Chua on his outstanding accomplishment! We are very pleased to have him represent the Department and Imperial College London on such a prestigious platform.