Artificial Intelligence research in the spotlight Imperial's global lead in Artificial Intelligence (AI) research was highlighted by the Observer on Sunday 6 March.

In the double-page feature, Imperial experts, early-career researchers, and PhD students shared their views on the future of AI research, its applications, and London’s thriving AI scene.

Murray Shanahan, professor of cognitive robotics at Imperial, explained how his group is using video games as a testing ground for systems which can learn through experience like a human would,  improving their understanding of their environment and how to interact with objects within it. 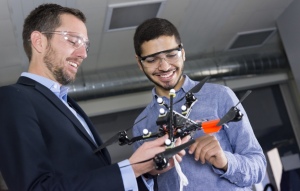 drones could one day form part of vast AI networks and perform functions for entire cities – such as spotting a person having a heart attack and calling an ambulance, or identifying leaks in gas pipes and fixing them.

A team supervised by Dr Mirko Kovac and led by PhD student Talib Alhinai recently took first place in the United Arab Emirates’ Drones for Good Award for their aerial robot that could ‘print’ material to seal leaks in pipes.

Imperial researchers also spoke of the advantages of being part of London’s fast-growing AI community, which is attracting the brightest minds from across the world and has been compared to San Francisco’s web start-up hub.

Professor Shanahan said: “This is a scene where everyone knows each other. You can’t help being caught up in the excitement of it.”

Feryal Mehraban Pour Behbahani, a post-doctoral researcher from Dr Aldo Faisal’s Brain and Behaviour Lab at Imperial, said: “We’re part of something bigger than academia. We’re close to the market and we can interact with industry.

“It gives young people with ideas the feeling that they can pursue them. Now there’s a momentum that wasn’t there a couple of years ago.”

Post-doc Anastasia Sylaidi, who works in the same lab, said: “London is a startup hub and it’s interesting to be exposed to what’s happening in industry while you’re working in research.”

The Observer - Artificial intelligence brings its brains and money to London