In pictures: Crowds bond with Imperial researchers over chemistry solutions Hundreds of Fringe-goers made chemistry their thing at Imperial's molecular-science themed Atoms Family event this week.

Members of the public got the chance to meet some of the College’s top atomic tinkerers at the latest Fringe event, where researchers showed off everything from molecules that could secure our energy supply and limit climate change to new high-performing compounds that will improve our lives. Erin Frick picked out some of the highlights. 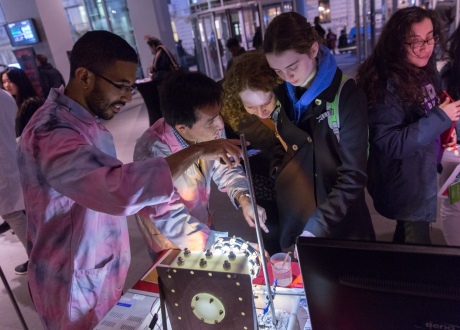 Splitting solar water Hydrogen is an increasingly common fuel source, but despite its ‘clean’ reputation, most hydrogen fuel comes from oil refineries, all but eliminating its sustainability benefits. Imperial’s Computational Materials Science and Photochemistry Groups are using a process called solar water splitting to produce a completely clean source of hydrogen fuel.

Camilo Mesa, a research postgraduate in the group, explains: “What we’re trying to do is power hydrogen generation with solar energy. We use materials such as hematite, in this case, which are able to absorb the energy from the sun to generate electricity as it would by a solar cell. Instead of sending that current into the grid, we’re using that current to drive a chemical reaction.” This reaction produces hydrogen, which - unlike energy harvested from solar panels - can be stored in the form of chemical bonds. 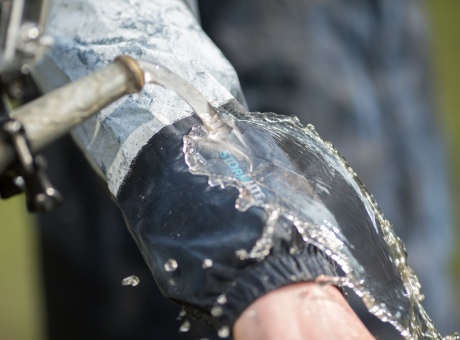 Rain repellent Consider a typical waterproof rain jacket. The water forms beads which roll down the surface in streams. Dr Colin Crick is taking waterproofing to a new extreme: “This water repellent paint is ‘supercharged’; not only does it not like water; it really hates water.” Sure enough, when he pours water over a coat sleeve painted with the substance, the water bounces straight off. Why does this happen?

Dr Crick explains that the surface of the paint is highly textured and is coated in an inherently hydrophobic material. These factors drastically enhance the paint’s water repellent properties - as though the water droplets were floating on a layer of air. The beads of water also collect dirt and bacteria which ‘bounce off’ with the water droplets, making the substance self-cleaning. 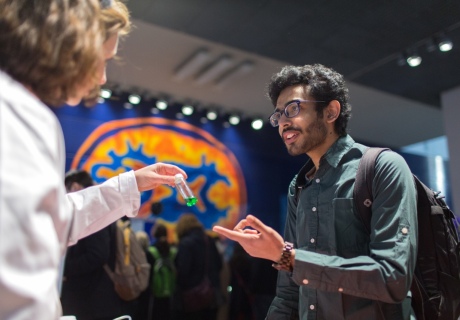 Harvesting urban wood Preservatives contianing copper enhance the durability of all sorts of wood items scattered throughout the urban landscape - everything from picnic tables to playground equipment. However, the preservatives release hazardous chemicals when they are burned and they are otherwise costly to dispose of. Florence Gschwend, a PhD student in the Department of Chemical Engineering, is exploring ways to repurpose metal-treated wood waste using a solvent that separates biomass from metallic treatment substances within the wood.

“We’re looking at different waste materials and trying to recover economic value from them, mainly for the purposes of biofuels and biochemicals,” she explained. Florence’s technique separates the components of the treated wood into usable materials including cellulose - to make bioethanol and bioplastics and lignin - which is being investigated as a source of plastic or carbon fibres. 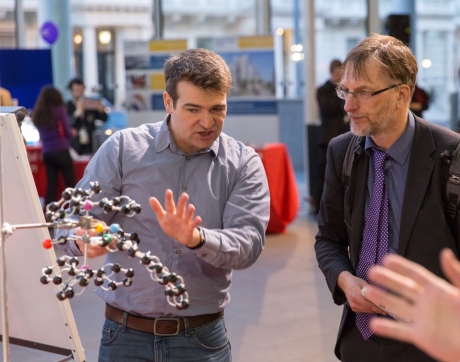 Lifesaving, colour-changing chemistry We depend on commercial monitors to detect carbon monoxide because it is a lethal substance that is colourless, odourless, and tasteless. However, these monitors can trigger ‘false alarms’ set off by steam, smoke, and even hairspray, which leads to people removing the batteries. Dr James Wilton-Ely’s team has developed a carbon monoxide detection system that tackles this problem on a molecular level, using a metal that binds very strongly to carbon monoxide.

In solution, this binding is signified by a colour change from red to yellow. To make this technique viable for residential use, the colour change is detected by a reading device, which converts the colour into a numerical reading, triggering an alarm. “Our system is very selective for carbon monoxide over everything else. That’s absolutely key.” 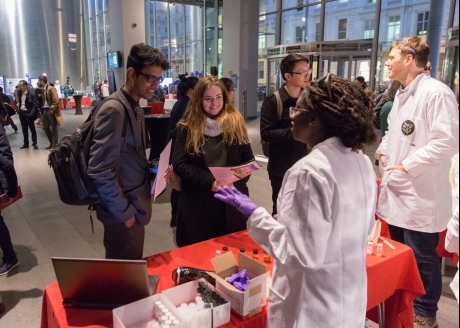 Iconic ionics From airplanes to digital cameras, lithium ion batteries are a pervasive source of power. However, despite their efficiency, they catch fire quite easily. Dr Cameron Weber from the Department of Chemistry explained how he is developing a clever alternative: “Current batteries are under-engineered because of the flame risk; you don’t want to make a lithium ion battery as powerful as possible if it’s going to catch fire.

"By using ionic liquids, you can start making higher energy batteries that can be used for things like making phones smaller and more powerful,” he added. Dr Weber demonstrates how an ionic liquid can be produced by combining two solids - choline chloride and urea - which, after several minutes of rigorous mixing, form a sticky, gelatinous substance. 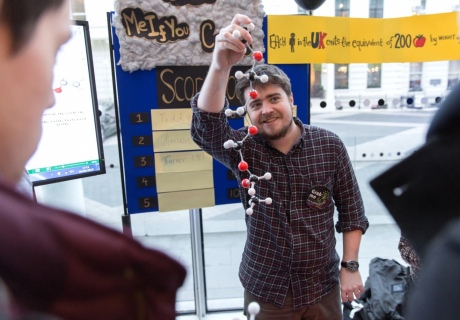 Catch me if you can Imperial’s Centre for Process Systems Engineering and the Institute for Molecular Science and Engineering are investigating ways to remove CO2 from natural gas to reduce the environmental impact of such fuel sources. One method adds a liquid solvent to a mixture of natural gas and carbon dioxide to separate the two substances. This allows the CO2 to be removed from the fuel before it can enter the atmosphere.

Smitha Gopinath, a PhD student at the molecular systems engineering group explained: “We’re trying to find the best conditions in which this process can operate - the best pressure, how much solvent you require, and the most important question - which solvent? Which liquid do you need? Our goal is to design more molecules and processes to answer these questions.” Smitha encouraged participants to try creating a molecule first-hand using models and optimisation software used to predict how a conceptual molecule might behave. 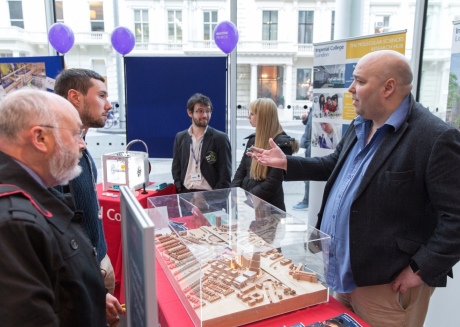 Hackspace White City A new Molecular Sciences Research Hub will be opening in 2017 at Imperial’s White City. Visitors heard about the ‘Advanced Hackspace’, which will soon be relocated there, from Hackspace team member Eifion Melnyk. He said: “Its goal is to act as a network for students to access spaces where they can prototype ideas and create masterpieces.”

The new location in White City will help streamline collaboration between students and local groups, while bringing together research teams from all over the world. “This is about finding new brains and bringing together new perspectives,” he added. For more information about events at Imperial, visit the College's What's On pages, or sign-up for our fortnightly events e-bulletin for the latest events straight to your inbox.

Discover the livelier side of science at Imperial Festival 2016, with a weekend full of hands-on activities, talks, music and more on 7-8 May. What is a Hackspace and why do we need one? In tweets: Imperial Fringe whets appetites at nutrition-themed evening