The annual competition brings the city’s most innovative student teams to City Hall to pitch their green business ideas for a chance to be crowned the Mayor of London’s Low Carbon Entrepreneur.

Elena Dieckmann said: “Featherfill is a low carbon home insulation made from using waste feathers from the poultry industry. It’s a young project so we really weren’t expecting to win. We’re really surprised. I was in the lab last night making the samples for the final so it’s all happened really quickly.”

Ryan Robinson added: “The idea actually came from watching real chickens and how well insulated they are from their feathers in the cold. Elena ordered 10kg of feathers to try it out which are a lot bigger in volume than you’d think. We hot pressed them and freeze dried them, trying to find ways to make the idea work until we got to our design.”

The trio received the award at the competition final on Tuesday, which saw the ten finalists, including three teams from Imperial, present to the judges in front of a live audience of fellow students, academics and leading experts from the energy and climate change sector. 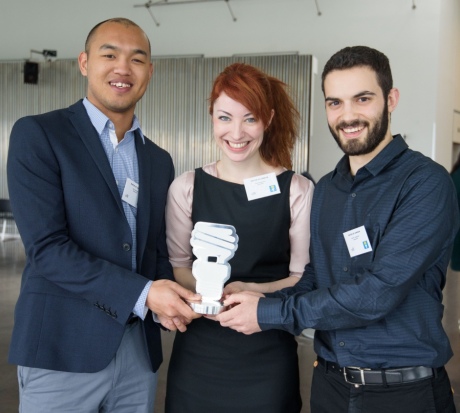 The Mayor of London, Boris Johnson MP, said: “London is leading the way in green technology and this competition can help kick start students’ sustainable ideas into business ventures. It’s vital that we support young enterprising people in setting up innovative businesses to make positive change and boost the capital’s thriving green economy.”

Now in its fifth year, the competition attracted more than 250 applications from 27 London institutions, with a team of industry experts given the difficult task of selecting the 10 best ideas to progress through to the final.

As the overall winner, Featherfill will be supported by a team from City Hall to help deliver their business idea into the global low carbon economy.

Making tunnels under London produces waste London clay. We want to turn that clay into something that can replace cement in concrete. Using less cement saves carbon and the processed clay makes better concrete.