Magnetic vortices are capable of retaining their recording of the earth's magnetic field for billions of years.

A high-temperature, high-resolution image study of magnetic vortices found in common magnetic minerals has shown them reliable recorders of the Earth’s history in a surprise finding, a joint UK/Germany project led by Imperial College London has shown.

Figure 1. Electron microscopy image of a magnetite nanocrystal (left) and the magnetic vortex structure (right), made visible for the first time by researchers from Jülich and the UK using electron holography. Copyright: Imperial College London

The earth’s magnetic field performs important functions: it protects us, for example, from charged particles from the sun and enables migratory birds, bees and other animals to navigate. However, it is not stable, and constantly changes its intensity and direction. Many times in the past it has even reversed its polarity – the magnetic north and south poles have switched. Scientists in the area of palaeomagnetism use the recordings made by magnetic minerals in rocks to investigate the history of the magnetic field and its formation within the earth’s core, the so-called geodynamo, and the movement of continental plates.

The stability of a magnetic recording is intrinsically governed by a time/temperature relationship: a magnetization that is stable at room temperature for millions of years is equivalent to the same magnetization being stable over laboratory timescales at high-temperatures. But how well do these vortex magnetic structures survive over millions and billions of years? A UK/German research team has studied this question for the first time at ultra-high resolution on samples of magnetite, the mineral dominating the magnetic properties in the earth’s crust. 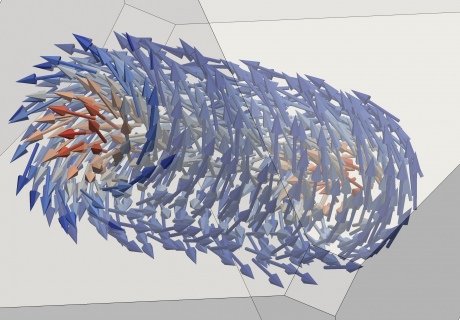 “It is only in a small part of naturally occurring magnetite that magnetic structures known for being very stable with respect to temperature fluctuations are found,” explains Dr. Trevor Almeida of the Natural Magnetism Group, Imperial College London. “However, far more common are tiny magnetic vortices, and their stability could not be demonstrated until now.”

Together with colleagues from Imperial College London, Forschungszentrum Jülich, the University of Edinburgh and the University of Nottingham, Dr. Almeida has studied the magnetic vortices in magnetite nanocrystals. As the structures are so small – each grain is less than one thousandth of a millimetre in size – there is only one method with which the nano-vortices can directly be observed while they are heated.

"A special high-resolution electron microscope at the Ernst Ruska-Centre (ER-C) in Jülich is capable of making magnetic fields on the nanoscale holographically visible,” explains Almeida. “It produces images of field lines, almost like when you use iron filings around a bar magnet to make its magnetic field visible, but with a resolution in the sub-nanometre range.”

Figure 3. In the process of electron holography, the electron beam in the microscope is split in two. One part serves as a reference; the second is directed through the sample and collects information about its magnetic structure. Both electron beams together create an interference pattern containing the information in an encrypted form. Analysis of the recorded hologram is necessary to allow conclusions to be drawn about the magnetic fields in the specimen. Copyright: Forschungszentrum Jülich

The experiments showed that although the magnetic vortices alter in strength when heated, they go back to their original state as they cool down. “Therefore magnetite rocks, which carry signs of temperature fluctuations, are indeed a reliable source of information about the history of the earth,” said Almeida.

“These unique electron holography sequences have shown us for the first time that these magnetite vortex structures, which are ubiquitous in natural systems and were thought to have low-recording fidelity, are in fact excellent recorders” explained project-PI Dr Adrian Muxworthy of Imperial College London. “This is a game changer in our understanding of the recording fidelity of rocks. This will help us to see a little clearer into Earth’s history”.