by Mikhail Menezes, Michael Panagopulos 06 May 2016

A new paper published in JACS presents the first ever example of dry enzymes modified to dissolve in dry ionic liquids.

Ionic liquids or “designer solvents” as they are sometimes known, are salts which are in the liquid state below 1000C. Unlike other organic solvents which are composed of molecules these ionic liquids contain ions in the liquid phase which gives them unique properties as solvents. They are typically non-volatile and have excellent chemical and thermal stability while also being “tuneable” to achieve desired solvent properties. The non-volatile nature of ionic liquids means they are largely environmentally benign and potentially offer a great, “green” alternative to volatile organic solvents.

Over the past two decades, major strides have been made in using enzymes as catalysts to synthesise chemical reactions with high selectivity and at lower temperatures than current industrial processes. The key drawbacks towards using enzymes as catalysts in our chemical processes is that they are typically more stable  in aqueous media at low temperatures which is inefficient for industrial processes. This creates a conundrum for designers of efficient chemical synthesis techniques: low-temperature aqueous media for optimal enzyme stability, or high-temperature organic media for high substrate solubility and improved kinetics? This key trade-off is where ionic-liquids come in.

Now, Dr Jason Hallett and Dr Alex Brogan from the Department of Chemical Engineering at Imperial College London have developed a novel, ionic liquid soluble protein by modifying the surface of the protein to create a protein-surfactant “nanoconstruct”. The results were published in the leading chemistry publication Journal of the American Chemical Society (JACS). In the study, the researchers show how the protein was modified using polymer surfactants to form a liquid that is highly stable and retains the nature, structure and activity of the protein while allowing it to dissolve easily in ionic liquids. Surprisingly, they discovered that this method of stabilising proteins makes them stable at temperatures more than 550C above the usual working conditions. This successful engineering of the protein surface to make them stable and soluble in ionic liquids presents opportunities for carrying out enzymatic reactions at temperatures well above 1500C, which would represent a significant step in activity and efficiency. 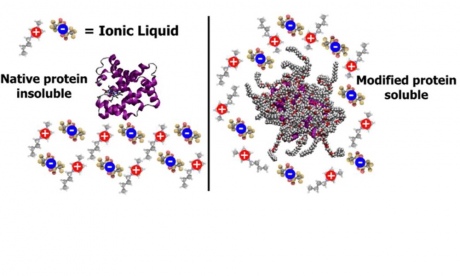 The protein modifications described allow it to solubilise and remain stable in anhydrous ionic liquids at temperatures over 110 degrees.

Dr Jason Hallett, the principal investigator on the project said, “We’ve managed to stabilise proteins in the complete absence of water at over 110 degrees, which has not been done before. It's pretty exciting! There are myriad opportunities for taking this technology forward for the development of biocatalysts”.

Having proven the feasibility of these proteins as biocatalysts in ionic liquids, the researchers are now focusing their work on attempting to stabilise industrially relevant enzymes such as lipases and xylanases in ionic liquids to demonstrate if these techniques can be deployed on a much wider scale. This approach also has potential applications for protein formulation in the pharmaceutical industry.

The research was funded by a Frontier Engineering Award from the Engineering and Physical Sciences Research Council (EPSRC).