Dedicated Imperial staff recognised for decades of service to the College Staff celebrating 35, 40, 45 and 50 years of service were thanked for their dedication at a celebratory dinner this week.

Professor Gast thanked those gathered for their service to the College:

“It is an honour to be here tonight amongst such esteemed and valued members of our community.  All of you personify the dedication that is at the heart of Imperial’s greatness.

“A lot has changed since you joined the Imperial community, and yet a lot remains the same.  While there are new buildings, some new names for departments, some new areas of study, Imperial has remained true to its values.  We value the rigour and discipline of this institution and we value excellence.”

Attendees had the opportunity to reminisce and catch-up with long-established colleagues. Charles Page, Senior Technical Consultant (Printing) in ICT marking 40 years service, commented: “It was a very pleasant and convivial evening; an opportunity for the long-serving members to feel valued and for the President to hear first-hand why so many people enjoy their time at Imperial and want to remain here.”

Addressing staff, Professor Gast acknowledged two attendees marking half a century at the College who are among the longest serving staff in the College’s history.

Trevor Beek is a Technician in the Department of Physics whose career included the design, building, and testing of the power-supply for an Imperial-led magnetometer on the Ulysses spacecraft launched in 1990.

Emeritus Professor David Mayne, Senior Research Investigator in the Department of Electrical and Electronic Engineering, has worked in control theory and signal processing. His work has had a wide array of applications, including in vehicle autopilots and aircraft tracking. 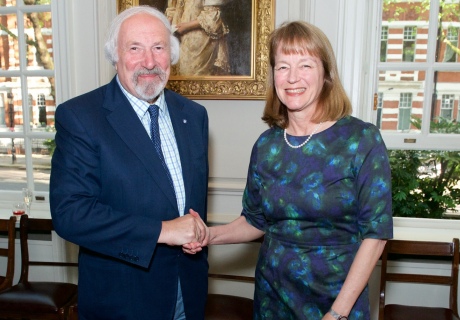 We caught up with two attendees to reminisce about their time at the College so far. Emeritus Professor Howard Morris, marking 40 years at the College, said:

“I arrived at Imperial in 1975 as a young lecturer in Professor Brian Hartley’s Biochemistry Department.  We established the first Biomolecular Mass Spectrometry group in the UK and we soon had our first major hit – the structure elucidation of the first endorphin to be discovered in the brain, Enkephalin, which was covered by BBC Two’s Horizon. This work helped put the group and the department on the map and we’ve never looked back.

“Most importantly, however, I've found the teaching and supervisory interaction with some of the world's brightest students at Imperial to be particularly rewarding, and these will be some of my finest memories when I eventually come to hang up my boots!” 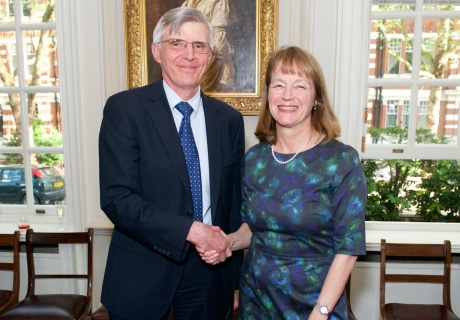 Dr John Shemilt, alumnus and Director of ICT at Imperial, attended to mark his 35 years service at the College. Dr Shemilt remarked:

“In the last 35 years, things have changed by many orders of magnitude. I started at Imperial working to establish a MicroLab in the Huxley building. These then cutting-edge machines boasted 56 kilobytes of RAM and a dual floppy disk drive. Today’s ICT department has grown naturally to be three times bigger than it was in 1981 and has a much wider remit, facilitating communication for all our staff and students – most of whom have three devices connected to our network.”