Dr Harsh Vardhan, Indian Minister of Science & Technology, heard about Imperial's many collaborations with India during a visit to the College.

The Minister came to Imperial as part of a three day visit to the Britain, during which he is co-hosting the UK-India Science Innovation Council with his UK counterpart – Jo Johnson MP, Minister of State for Universities and Science. The Council sets priorities for UK engagement and aims to stimulate strategic collaborations between the two nations.

The Minister was given an introduction to Imperial’s Advanced Manufacturing Laboratory, which focuses on the fundamental science and engineering research that will form the basis of future manufacturing industries. Advanced manufacturing is recognised as a key area for future collaborations by the UK-India Science and Innovation Council.

Imperial has rich and diverse collaborations with Indian across a vast range of disciplines. During the visit, Dr Vardhan met with Imperial academics from across the College to hear about how these partnerships are translating into benefits for society.

For example, research from Imperial and the India Diabetes Research Foundation is helping to prevent type 2 diabetes in India.

Imperial engineers and colleagues from Indian institutions are working to understand the effect of climate change on water availability in the North Indian plains. 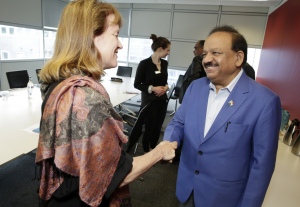 Researchers from the Grantham Institute, in partnership with colleagues the Divecha Centre for Climate Change are investigating to the impact of short-lived air pollutants on rainfall over India.

And Imperial College Business School’s Gandhi Centre for Inclusive Innovation, which works with some of India’s leading research institutions, is working to support and promote collaboration with the nation.

Thanking Imperial for hosting the delegation, Dr Vardhan mentioned India’s high regard for the College, calling it “one of the prime institutions across not just the UK, but the entire world”, and spoke of his desire to further strengthen ties between Imperial and India.

Professor Alice Gast, President of Imperial, said: "It was an honour to host the Minister and to share with him examples of our leading research work with Indian partners. I hope the commitment of the UK and Indian governments to research and education collaboration will create new opportunities for both nations.”