Genes find their partners without matchmakers

A new study provides more evidence that identical sections of DNA can match up with each other without the help of other molecules.

DNA molecules in our bodies carry genetic information encoded in segments called genes. Each gene encodes a certain attribute, feature or function in living organisms. However, genes are regularly damaged and need to be repaired.

If such mechanisms are somehow utilized by nature, this is yet one more function encoded in DNA’s amazing structure, which never stops surprising us.

During one repair process, called homologous recombination, a damaged, broken gene is replaced with the same gene of a spare intact DNA copy. Errors due to swapping ‘wrong’ genes lead to various genetic disorders, such as the condition progeria that causes rapid aging.

As well as repairing genes, homologous recombination is crucial in reproduction and evolution, as it allows genes that we get from each parent to be shuffled together. So-called recombination proteins do the copying and replacement of genes in this process.

While proteins are responsible for the recombination process, it was not known how homologous genes find each other beforehand. There are more than 20,000 genes in human DNA, and DNA strands are coiled up in complex bunches called chromosomes, so finding the homologous gene on a different DNA strand is no easy task.

Experiments with multiple DNA molecules, conducted in 2008 by a research team from Imperial College London and National Institutes of Health (NIH), found evidence that DNA molecules with the same genetic code are able to find their matches without any outside help – no proteins or other molecules guide them towards each other.

Those experiments showed that two sets of relatively short identical double-stranded DNA fragments, randomly mixed in a solution, would spontaneously group together with those of the same type. A later study by researchers at Harvard University led by Professor Mara Prentiss found further evidence for pairing of longer homologous double-stranded DNA.

Now, in a new joint Harvard and Imperial study, published today in Proceedings of the Royal Society A, the team present evidence of the attraction between long identical DNA sections within a single molecule. The Harvard team was responsible for experiments while the Imperial group was focused on analysis and interpretation of the data. 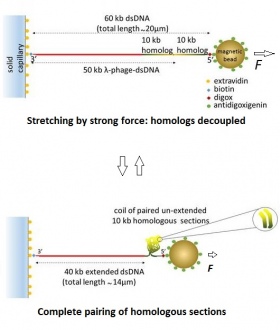 The Harvard team anchored one end of a double-stranded DNA to the bottom of a very small container of solution, and attached a magnetic bead to the other end. This allowed them to manipulate the molecule and pull it straight using a magnet.

They constructed double-stranded DNA molecules that contained long sections carrying the same genetic code next to each other and running in opposite directions – head-to-head – and compared their behaviour to DNA without identical sections.

The team observed that, in pulling the magnetic bead away from the bottom of the container at a fixed force, the DNA molecules with identical sections straightened less than other DNA molecules. The reason for this is that molecules with matching sections folded in on themselves and formed a loop, thereby pairing identical genes.

Since 2001 Professor Alexei Kornyshev’s group within the Department of Chemistry at Imperial have been working on and suggesting physical mechanisms for the pairing identical DNA sequences. An important role in that research has been played by Dr Dominic Lee, the lead author of the present paper.

Dr Lee said: “Having proved an interaction between identical sequences in single DNA molecules, in these new Harvard-based experiments, the next step would be to further probe the recognition mechanism. Independently of this, we also hope that the new result will trigger experiments in real cells, to see if the recognition process occurs in the same way naturally for homologous genes.”

Co-author Professor Kornyshev added: “We’re excited to have seen this behaviour in a test tube. If such mechanisms are somehow utilized by nature, this is yet one more function encoded in DNA’s amazing structure, which never stops surprising us.”