Dutch men and Latvian women are the tallest on the planet, according to the largest ever study of height around the world.

The research, led by scientists from Imperial College London and using data from most countries in the world, tracked height among young adult men and women between 1914 and 2014.

This study gives us a picture of the health of nations over the past century, and reveals the average height of some nations may even be shrinking while others continue to grow taller

The research also revealed once-tall USA had declined from third tallest men and fourth tallest women in the world in 1914 to 37th and 42nd place respectively in 2014. Overall, the top ten tallest nations in 2014 for men and women were dominated by European countries, and featured no English-speaking nation. UK women improved from 57th to 38th place over a century, while men had improved slightly from 36th to 31st place.

The researchers also found that some countries have stopped growing over the past 30 to 40 years, despite showing initial increases in the beginning of the century of study. The USA was one of the first high-income countries to plateau, and other countries that have seen similar patterns include the UK, Finland, and Japan. By contrast, Spain and Italy and many countries in Latin America and East Asia are still increasing in height.

Furthermore, some countries, particularly those in sub-Saharan Africa, North Africa and the Middle East have even seen a decline in average height over the past 30 to 40 years.

How tall we grow is strongly influenced by nutrition and environmental factors, although an individual's genetic factors may also play a role. Children and adolescents who are better nourished and live in better environments tend to be taller, and height may even be influenced by a mother's health and nutrition during pregnancy. It has lifelong consequences for health and even education and earnings. Some research suggests people who are taller tend to live longer, gain a better education and even earn more. However, being tall may carry some health risks, as studies have linked height to a greater risk of certain cancers including ovarian and prostate.

Professor Majid Ezzati from the School of Public Health at Imperial who led the research said: "This study gives us a picture of the health of nations over the past century, and reveals the average height of some nations may even be shrinking while others continue to grow taller. This confirms we urgently need to address children and adolescents' environment and nutrition on a global scale, and ensure we're giving the world's children the best possible start in life."

He added: "Our study also shows the English-speaking world, especially the USA, is falling behind other high-income nations in Europe and Asia Pacific. Together with the poor performance of these countries in terms of obesity, this emphasises the need for more effective policies towards healthy nutrition throughout life." 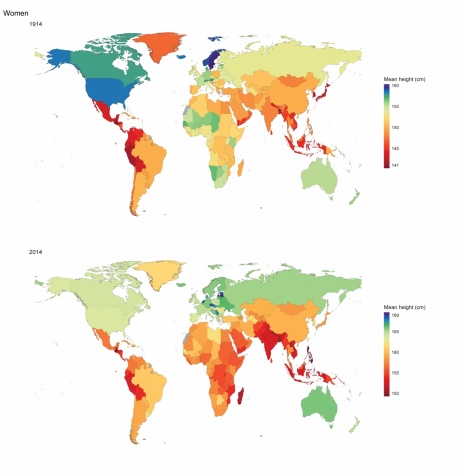 Mary De Silva, Head of Population, Environment and Health at the Wellcome Trust, who co-funded the study, said: "This is a unique analysis that shows the real power of combining a hundred years of population data sources that span the globe. The most striking finding is that despite the huge increases in height seen in some countries, there is still a considerable gap between the shortest and tallest countries. More research is needed to understand the reasons for this gap and to help devise ways of reducing the disparities in health that still persist globally."

The research team, which included almost 800 scientists and was in collaboration with the World Health Organization, used data from a wide range of sources, including military conscription data, health and nutrition population surveys, and epidemiological studies. They used these to generate height information for 18-year-olds in 1914 (who were born in 1896) through to 18-year-olds in 2014 (who were born in 1996).

Among the findings the team found that:

* The height difference between men and women has on average remained largely unchanged over 100 years - the average height gap was about 11cm in 1914 and 12cm in 2014.

* The average height of young men and women has decreased by as much as 5cm in the last 40 years in some countries in Sub-Saharan Africa such as Sierra Leone, Uganda and Rwanda.

* Australian men in 2014 were the only non-European nationality in the top 25 tallest in the world.

* In East Asia, South Korean and Chinese men and women are now taller than their Japanese counterparts.

The research was funded by the Wellcome Trust and the Government of Canada through Grand Challenges Canada's Saving Brains program.

"A century of trends in adult human height" by Ezzati et al is published in the journal eLife. Cost of diabetes hits 825 billion dollars a year, according to new study World's obese population hits 640 million, according to largest ever study