The Faculty of Engineering held its third annual Bring Your Child To Work Day last week.

On Tuesday 9 August 61 children and parents attended a packed morning of activities delivered by the Departments of Mechanical and Earth Science & Engineering, the Science Museum and the company Octopus Parties. 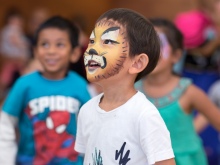 Alongside face-painting and games children had the opportunity to learn more about Newton's laws of motion and saw how different materials change under extreme heat and cold.

Children and their families also learned about Mars and some of the College's current research, and uncovered the secrets of mechanical systems as they got the chance to build different types of Lego machines.

There was also a focus on the earth sciences, as children went on fossil hunts, learned about dinosaurs, explored volcanoes and panned for gold.

Tim Venables, Operations Manager in the Department of Mechanical Engineering, enjoyed the event: "Once the structured events were finished the kids wanted to visit the Department and go and see stuff in action, My daughter loved the medical robots and CNC machines and wanted to know if we could get a robot to do my job when I’m on holiday."

The Faculty event was set up to support its working families and give them the opportunity to showcase some of the College's work to their young audiences. 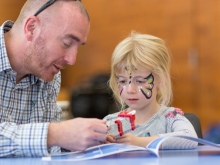 Professor Peter Haynes, Head of the Department of Materials, was one of the parents whose child took part: "As well as an exciting and stimulating series of activities, the day provided a rare opportunity for staff families to get together, fostering a sense of community that is particularly challenging in London with staff living so far afield."

As well as experience of a university campus the enthusiastic budding scientists also received their own goodie bag from departments.

One parent summed up their feelings about the day: "My five year old son loved it (and remembered last year's event too!) so that's all that matters. The entertainers managed to get him to join in which is quite rare, and they were very good with both the children and the parents.

"Overall just having the day is so nice and whenever I tell friends working elsewhere that Imperial has a special day for children of staff members they are very impressed and wish their employer would do something similar. Looking forward to next year!"