Located in the east part of southern Africa, Malawi is a Least Developed Country with a huge poverty challenge. Agriculture is the primary source of income in Malawi’s economy and maize is the most important crop for food security.

Our research highlights the opposing apparent effects of climate change on maize production and food security.

Malawi’s agriculture sector employs 85% of the population and contributes to nearly 30% of the economy. Only 5% of the farmers use irrigation, with the remainder relying heavily on rainfed agriculture. Evidence suggests that in the past fluctuations in Malawi’s economic growth have been driven by changes in seasonal rainfall, thus emphasising the vulnerability of the country to climate change.

These factors, coupled with high population growth, make the nation vulnerable to the impacts of climate change. In recent years, Malawi has experienced droughts and floods that have emphasised the country’s susceptibility to climate change impacts.

This predicament motivated Tilele Stevens, an MSc student at the Centre for Environmental Policy (CEP) of Imperial College London, to understand how climate change can affect food security and economic growth.

Tilele and her MSc adviser, Dr Kaveh Madani, Reader in Systems Analysis and Policy at CEP, have published their study results in a Nature journal, Scientific Reports, highlighting the potential effects of climate change on maize production and food security in Malawi. 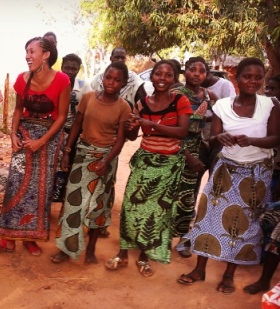 The study findings suggest that under projected short-term moderate changes in the climate, maize yields in the studied parts of Malawi could increase.

However there is a caveat; with favourable climate conditions, which promote faster crop growth, soils would be rapidly depleted of nutrients.

Furthermore, the anticipated benefits of climate change are expected to be short lived; hotter temperatures in the second half of the century are predicted to be detrimental to maize yields.

“Our research highlights the opposing apparent effects of climate change on maize production and food security,” said Stevens. “We suggest a holistic approach in building resilience into Malawi’s agriculture sector in climate change adaptation. This should consider sustainable resource management as well as market and economic factors.”

Tilele hopes that the MSc dissertation’s findings can endorse good field management practices, as advocated by Malawi’s Ministry of Agriculture and Food Security, to improve soil quality and fertility.

“Our findings draw attention to the importance and implications of future policy formulation with regards to climate change adaptation measures in Malawi,” added Dr Madani. “Water and agriculture have been largely overlooked in climate change negotiations. I really hope that these two sectors are addressed as key elements of COP22 negotiations.”