Engineers have developed a prototype drone that dives like a gannet and launches like a flying fish, to collect water samples. 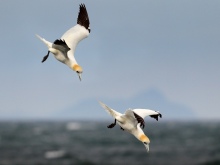 Gannets (left) are the largest seabirds in the north Atlantic and hunt fish by diving from height into the sea at up to 60 miles per hour. Flying fish can make powerful, self-propelled leaps out of the water and into the sky, where their wing-like fins help them to glide over considerable distances.

The team from Imperial College London have taken inspiration from these behaviours in their prototype AquaMAV robot. The AquaMAV is designed to collect samples in situations such as monitoring water quality in reservoirs and measuring changes in ocean salinity to gauge the effects of climate change.

By examining the diving qualities of gannets and the leaping behaviour of flying fish, we can make an aerial drone that needs less on board control, making it more robust and more affordable to manufacture.

Currently, researchers generally have to use boats to manually collect water samples. AquaMAV is designed to be rapid, efficient, and more cost effective than this method. It can also carry out tests in dangerous situations such as in disaster zones or from locations currently inaccessible to people, such as deep under the ocean.

One of the current drawbacks for small scale flying robots is that they generally lack sufficient power to make the transition from water to the air. The team in today’s study say they have potentially overcome this problem with their drone by mimicking the way flying fish make ‘impulsive’ leaps from the water.

The AquaMAV uses carbon dioxide, which is stored internally, to propel itself out of the water. In the air, retractable wings are deployed to help it glide, much in the same way that fins help flying fish.

The drone only weighs 200 grams and can currently achieve speeds of around 30 miles per hour from a starting point beneath the water. It can make the aerial leap even if conditions on the surface are rough.  The researchers say AquaMAV can currently fly around five kilometres to and from an analysis. The team say the aerial range would enable those analysing the samples to be at a safe distance away from a potentially hazardous situation.

The research, part funded by the Engineering and Physical Sciences Research Council, is published in the journal Interface Focus.

Dr Mirko Kovac, the director of the Aerial Robotics Lab in Imperial’s Department of Aeronautics, said: “During an emergency scenario such as a major oil leak an AquaMav could fly and dive into isolated patch of water, where it could collect samples or loiter  and record environmental data. The vehicle could then perform a short take-off and return to its launch site to submit samples for analysis. This would enable a fast, targeted response that could not be matched by the current methods.”

Previous studies have, for example, demonstrated the effectiveness of water sampling using drones that have large multi-rotational propellers. This approach is more complex, relying on very accurate sensing and control systems to maintain the drone in the air while sample probes are carefully lowered into the water to collect specimens.

The team say the advantage of their small, fixed-wing AquaMAV is that it can travel faster and over longer distances compared to hovering vehicles. The plunge diving approach, which mimics how the gannet dives, reduces the need for highly accurate control. This means that the AquaMAV would be more cost effective to manufacture because it needs less gadgetry, and more could be bought and deployed, to give a more in-depth analysis.

Rob Siddall, lead author and postgraduate from Imperial’s Department of Aeronautics, added: “We are really excited by our AquaMAV prototype. We believe we may have overcome the power density problem which makes launching out of the water so challenging for small drones. Nature often has an elegant way of solving engineering challenges. By examining the diving qualities of gannets and the leaping behaviour of flying fish, we can make an aerial drone that needs less on board control, making it more robust and more affordable to manufacture.”

The researchers are currently looking to collaborate with oceanographers and various water authorities to take their testing to the next stage. The aim is to deploy the robot in a wide variety of scenarios, to test the robot’s limits in waves, wind and weather, and examine the physics of high speed dives into water. An additional propulsion system is also under development to make the AquaMAV fully aquatic, capable of long periods of submarine operation.