Mozart may enhance a man's performance in board games - while AC/DC may hinder their chances, according to new research.

The scientists behind the study, from Imperial College London and the Royal College of Music, say classical music may be the best option for men when concentrating on a task.

Music was found to have no effect on women's performance, though they generally performed better than men at the game involved in the study.

In the research, the team asked 352 visitors at the Imperial Festival - an annual celebration of the science that takes place at Imperial - to play the game Operation.

This study suggests that for men who are operating or playing a board game, rock music may be a bad idea

This game involves removing various body parts from a pretend patient - Cavity Sam - whose nose flashes and buzzes if your tweezers touch the metal sides of the body.

Researchers gave the volunteers headphones that played one of three tracks - Andante from Sonata for Two Pianos by Mozart, Thunderstruck by AC/DC, or the sound of an operating theatre.

The team then timed them how long it took the participants to remove three body parts, as well as tracking their mistakes. 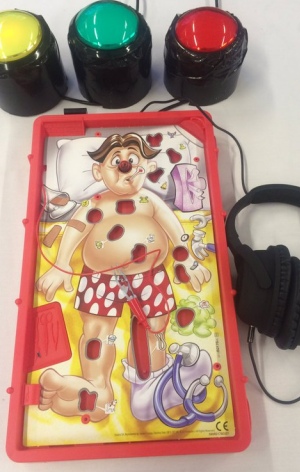 The game used in the experiments, which was modified to measure time and mistakes

It took volunteers around one minute to complete the task.

Women, however, did not seem to be distracted by the rock music, and none of the three tracks made any difference to performance or speed.

Generally, women took longer to remove the body parts, but made fewer mistakes.

The researchers are unsure why rock music affected men more than women. One explanation, they said, could be that rock music causes more auditory stress - a state triggered by loud or discordant music - in men.

The scientists also asked people about their musical tastes, and found that Mozart only reduced the number of mistakes people made if they reported high levels of appreciation for the Sonata they listened to.

The team, who are from the Centre for Performance Science, a collaboration between Imperial and the Royal College of Music, say the study is part of wider research into how music affects performance.

Dr Daisy Fancourt, lead author of the research from the Centre for Performance Science, said: "Although this study is clearly tongue-in-cheek, and was all performed in our spare time, it is part of our wider research into the effect of music on performance - particularly in a medical setting such as an operating theatre."

She explained that music is reportedly played up to 72 per cent of the time in an operating theatre. However, experts are divided on whether it has a beneficial effect. Some research, for instance, has found that Jamaican music and Hip-Hop increases operating speed and surgical instrument manipulation. However another study reported that one in four anaesthetists, who are responsible for keeping patients sedated, said music reduced their vigilance.

The team also investigate how music can affect performance in other fields.

"One of our areas of research is how we can boost performance in many different settings - from rowing in the Olympics, to a musical performance or delivering an important speech. This study suggests that for men who are operating or playing a board game, rock music may be a bad idea," said Dr Fancourt, who is also a research fellow at the Department of Surgery and Cancer at Imperial.

The research is published in the Medical Journal of Australia's Christmas issue, where it won top prize for quirky - yet scientifically rigorous - research.

" The razor's edge: Australian rock music impairs men's performance when pretending to be a surgeon" by Fancourt et al. is published in the Medical Journal of Australia.

BBC - Women's concentration 'less disrupted by music' Sky News - Rock music 'can make men lose at board games' - study The Guardian - AC/DC, sledging and booze: dirty deeds to help you cheat at Christmas board games The Telegraph - The secret trick which could help women beat men at board games this Christmas