A project started by a Masters student is now a company that could change how boxing performance is understood.

Meanwhile, a current student is looking to expand the technology to martial arts.

Technology for measuring and tracking performance is the norm in many sports nowadays, from cycling apps like Strava to the Hawk-Eye system used in tennis. Back in October 2014, Mechanical Engineering student and amateur boxer Charles Burr realised there wasn’t any similar system available to boxers, and he decided to do something about it.

“The closest thing in boxing before we started was what the GB Olympic team did, getting footage of all their athletes in training sessions, which they would then slow down, review, count all the punches and put them into a computer to get graphs. But this would take a lot of time and manpower, and it means you don’t have feedback when it matters.” 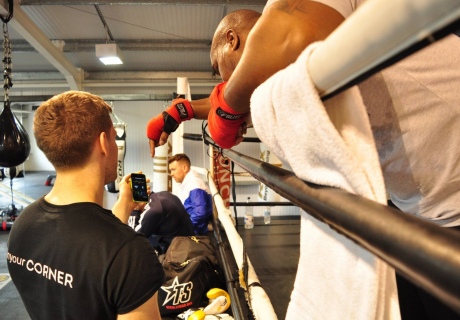 Having already worked with motion tracking tech on other course projects, including one on monitoring crocodiles, Charles pitched to his supervisor Dr Ravi Vaidyanathan a fourth year project on quantifying boxing performance.

The system involves a pair of sensors placed in the hand wraps of the athlete, under the gloves, and it can be used in any form of boxing training, be it shadow boxing, heavy bags, pads or sparring: “We use accelerometers to detect a punch’s motions and classify it into different types: a jab, a hook, an uppercut or a cross. We also give metrics on the speed and the power of those punches, and insights into your style.”

The technology developed at Imperial formed the basis of Athletec, a start-up in Manchester founded by Charlie alongside Glasgow School of Art graduate Jerry Krylov, who brought on his expertise in design and branding. The company was launched at the 2016 Consumer Electronics Show in Las Vegas; top boxers like the heavyweight champion Anthony Joshua have tried out the device and given favourable feedback. Could this innovation change the way boxing is practiced and understood?

“What we’re doing is making previously elite analysis accessible to anyone”, says Charles. “I think it will mostly help up-and-coming, hobbyist, or even early pro boxers. Until now, boxers have been going after feelings, and that doesn’t always tell you the full picture, sometimes you may be feeling a bit down, but you’re doing better than you realise. Seeing it on the app makes a huge difference. There’s also quite an interest for this technology to be used during live fights, to get stats and televise them to viewers at home, to boost the fan experience.”

In the early stages of the project, Charlie received some financial support and advice from Imperial’s Rio Tinto Sports Innovation Challenge, but the course itself provided the right framework for his entrepreneurship career: “Imperial are very good at supporting you to follow your own interests, and the courses are very, very applicable. My little brother is thinking of going there as well and I’d say to him, it will be tough, don’t get me wrong, but you’ll come out and you’ll be very confident, and with a lot of experience, not just in your field.”

"Engineers are the ones who can make imagination into reality"

Current MSc student Yuhua Gu is a sports enthusiast as well: trained in a variety of combat sports, she has a black belt in Taekwondo, and she thought her activity of choice could also benefit from a performance monitoring system. For her Master’s project, she is now looking to expand Charlie’s initial technology beyond punching movements.

Yuhua started Taekwondo training in sixth grade, spurred on by a friend: “It’s a really great sport, if you work hard for two or three months you will already see a big improvement in your whole body and your stamina. (She substantiates this claim by demonstrating a high kick). If I find that I’m stuck in the coursework, and I need some relaxation, I try to do some sport. And I think sports can also improve your thinking and your spirits.”

Adapting wearable technology for boxing to Taekwondo is not exactly a piece of cake, of course, as Yuhua explains: “The scope of the movements is bigger than for hands, it’s 360 degrees”. Using software built by PhD student Sam Wilson, Yuhua is working on mapping and analysing a variety of movements.

Yuhua believes her idea could turn into a competitive product to help fighters develop their skills, and the first interested customer is herself, but “after I build a simple project, I will let others try and ask them about their experience, how can I improve the program”. She would also love to see her work tested by her favourite fighter, Chinese Olympian Wu Jingyu (“She’s my idol”, Yuhua says.)

While Yuhua’s parents had advised her to study arts, she found engineering much more inspiring: “I think engineers are the ones who can make imagination into reality”. She isn’t daunted by any gender stereotypes around engineering or combat sports: “I think we [girls who study engineering] are very popular, because there are not many of us doing it. As for Taekwondo, at my university in China there were more girls than boys doing training. Here at Imperial, it’s half and half- it’s not just a men’s sport.”

From the lab to real life impact

Dr Ravi Vaidyanathan, supervisor to both Charles and Yuhua, is always happy to see students marrying their personal and professional interests in their studies. As a former boxer, he had the opportunity to explore a personal interest, too, and he is keen to see Charles’ project change some of the preconceptions around the sport: “there is a bit of a dogma that you have to have a tendency for violence, or you actually want to hit people. I hope things like this will make boxing more accessible, and break down that it’s a sport, and there are so many things you can do with it that involve getting a nice balance between body and mind.”

There is a bit of a dogma around boxing, that you have to have a tendency for violence, or you actually want to hit people. I hope things like this will make it more accessible

Dr Vaidyanathan has been involved in several start-up companies so far, and is still on Athletec’s advisory board. He supported Charles in taking the entrepreneurship path: “With most of the companies I’ve seen and been part of in this growth phase, success or failure isn’t really based on their technical material, almost all of them are strong technically. I was very happy to encourage Charlie because I believed he also had the mindset of a successful entrepreneur.”

Ultimately, what makes academic work rewarding is the opportunity to deal with new and exciting ideas: “I find really it refreshing working here, especially when the students move forward and carry into industry and forward. Then I see work leave our lab and start to impact people’s lives on a regular basis. So from my window, I get to be a part of these wonderful ideas and play a role in their development.”