Fledgling stars try to prevent their neighbours from birthing planets Stars don't have to be massive to evaporate material from around nearby stars and affect their ability to form planets, a new study suggests.

Newly formed stars are surrounded by a disc of dense gas and dust. This is called the protoplanetary disc, as material sticks together within it to form planets.

Stars of different shapes and sizes are all born in huge star-forming regions. Scientists know that when a protoplanetary disc around a relatively small star is very close to a massive star, the larger star can evaporate parts of the protoplanetary disc.

This result has consequences if we want to understand the diversity of exoplanet systems that are being discovered. This phenomenon could significantly affect the planets that can form around different stars.

The researchers estimate that the disc will lose about 3,300 Earth’s worth of material over its 10-million-year lifetime, despite the light from the nearby star being 10,000 times weaker than stars usually caught stripping discs.

Lead author Dr Thomas Haworth from the Department of Physics at Imperial said: “Because the light shining on this disc is so much weaker than that shining on known evaporating discs, it was expected that there would be no evaporation. We have shown that actually these stars can evaporate a significant amount of material.

“This result has consequences if we want to understand the diversity of exoplanet systems that are being discovered. This phenomenon could significantly affect the planets that can form around different stars. For example, light from nearby stars could limit the maximum size a solar system can be.” 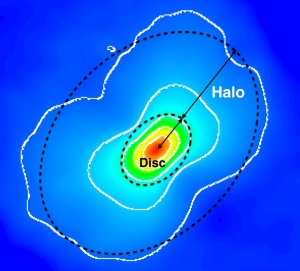 The IM Lup system was studied recently by Dr Ilse Cleeves at Harvard, who discovered an unexplained ‘halo’ of material around it.

Working with Dr Cleeves, and researchers from the Max Planck Institute and the University of Cambridge, Dr Haworth modelled the flow and chemistry of the system to determine if the halo was the result of a nearby weak star heating up the system and evaporating away material.

They found that the halo is the result of evaporation, as material streams away and is lost to space. The team think the reason this disc is being strongly evaporated is that it is very wide.

When talking about solar systems or discs, distances are usually measured in astronomical units (AU), with one astronomical unit being the distance from the Sun to the Earth. The distance out to Pluto is about 40AU, whereas IM Lup’s disc reaches out to about 400AU.

This means the star cannot hold on to the disc’s outer parts so strongly, as its gravity would be much weaker that far out, leaving the fringes at the mercy of evaporation.

Dr Haworth said: “Our calculations show that if the disc started at 700AU in size, it would halve in size in the first million years of its life. Since IM Lup is less than a million years old, we’ve caught it in the act of rapid shrinking.” How planets are born