HBS Vexplosions with the competition judges

The winning team saw off competition from schools across London to win this year's School Science Competition.

HBS Vexplosions, a team of Year 8 pupils from Henrietta Barnett School, beat over 50 other student teams to take this year’s prize.

All of the students who took part should be really proud of their efforts.

The team, who are part of their school’s Robotics Club, took the prize with their idea for a new, light-weight type of exoskeleton.

The competition, run by the Faculty of Natural Sciences as part of the College’s Enterprise Week programme, aims to motivate school students to engage with science and innovation, to encourage them to work together as part of a team and to engage them in a fun activity that is motivated by their curiosity and drive.

This year’s challenge called on the student teams to develop an innovative scientific solution to an everyday problem.

More than 50 teams entered this year’s competition, with nine being shortlisted and invited to present their ideas at a showcase event held at Imperial last week. 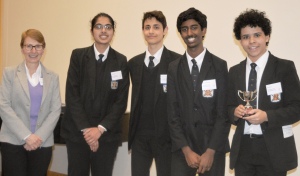 The teams presented ideas ranging from using piezoelectrics to generate current to recharge a phone from the movement of the wearer, to tackling the threat of solar flares.

Professor Tom Welton, Dean of the Faculty of Natural Sciences, said: “This is the third year we’ve run this competition and the quality of the finalists never ceases to impress. 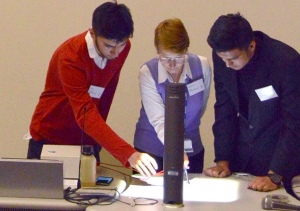 “To see young people at this age demonstrating the knowledge, inventiveness, creativity and presentation skills that these teams have is really inspiring. All of the students who took part should be really proud of their efforts.”

The winners were presented with their trophy by surprise guests, the winners of last year’s competition team Newton’s 4th Law from Haydon School.

As well as taking home the coveted trophy, as part of their prize the team will visit the Diamond Light Source, the UK’s national synchrotron. The facility accelerates electrons up to very high speeds to produce bright beams of light that can then be used to study a vast range of subjects. The team also took home individual prizes for each team member.

The judges also awarded runners-up prizes to the following teams:

Team Newton’s Force (Cameron Creaser, Simrit Sekhon, Thisan Sriranganathan and Alex Stevens) from The Heathland School. The team’s idea was to adapt gym equipment to supply energy through body movement and to promote healthy living whilst helping the environment.

Team Filter (Seiar Ataei, Olachi Akin, Abid Alizada and Alan Yahya) from Hatch End High School. Their idea involved the use of underground tesla coils to create a safe, positive field of electrostatic charge in a given radius, to ionise harmful air particulates to address the problem of air pollution.