Scientists have shown how diesel fumes trigger respiratory reflexes which could potentially worsen underlying conditions, such as asthma.

The study, led by researchers at Imperial College London, is the first to demonstrate a mechanism by which diesel exhaust particles, a major component of air pollution in European cities, directly affect the lungs to initiate symptoms such as a tightening of the airways and cough.

Previous research has shown a strong association between urban air pollution and respiratory symptoms such as coughing, wheezing and shortness of breath, but the underlying mechanism has been unclear.

In the latest study, published today in the Journal of Allergy and Clinical Immunology, an international team has shown that by-products from burning diesel fuel – called polycyclic aromatic hydrocarbons (PAHs) – directly stimulate nerves in the lungs, causing a reflex response in the airways.

The findings may provide a key link between exposure to air pollution on city streets and respiratory symptoms which can lead to hospitalisation for people at higher risk, such as the very young, the elderly, and those with respiratory diseases.

“In major European cities like London, we are already exceeding the recommended levels for air pollution, and these findings provide another reason why we need to curb these levels,” said Professor Maria Belvisi, head of the Respiratory Pharmacology group at Imperial’s National Heart and Lung Institute, who led the research. “Pollution will affect everyone, but it affects people with underlying conditions, such as asthma, even more.”

Pollution will affect everyone, but it affects people with underlying conditions, such as asthma, even more

Previously, scientists showed that the effects of air pollution on the lungs of asthmatics correlated with the concentration of small, ultrafine particles inhaled, although the exact mechanism was unclear. These tiny particles (less than 100nm in diameter), can get deep into lungs and are so small that cells recognise them as biological molecules which can be absorbed and processed, possibly accounting for their adverse health effects. However, the new findings suggest a more complicated mechanism.

When the particles in diesel exhaust were processed to separate the insoluble carbon core from the soluble, outer organic fraction, the researchers found that it was chemicals on their surface (the PAHs) which directly stimulated nerves, while the central carbon particles did not. The researchers say that the small size of the particles helps the chemicals to reach deep into the lungs, and cross membranes, where they can activate the nerves.

Professor Terry Tetley, co-lead author and also from Imperial’s National Heart and Lung Institute, said: “This study, which brought together a multidisciplinary team of scientists, helps to address the previously unknown effects of particulate air pollution on respiratory symptoms. The findings further highlight the potential health impacts of urban air pollution on the public, particularly on those with underlying health conditions.”

The researchers found that when the tissue had been exposed to PAH’s, sensory nerves responsible for the reflex events and initiating common respiratory symptoms, such as coughing and wheezing, were stimulated. The evidence suggests that when these organic compounds are inhaled, they interact with receptors in the airways to cause oxidative stress. This stress then cascades and opens ion channels, tipping the electrochemical balance and causing the nerves to ‘fire’.

These findings were further supported using nerve tissue from mice lacking the functioning ion channel (called TRPA1), in which this change to the electrochemical balance in the nerves, and subsequent symptoms, was not seen.

“Our work shows that particles from diesel exhaust can activate these ion channels, stimulating the nerves in the lungs. This may be responsible for the respiratory symptoms we see following exposure to urban air pollution,” explained Professor Belvisi. 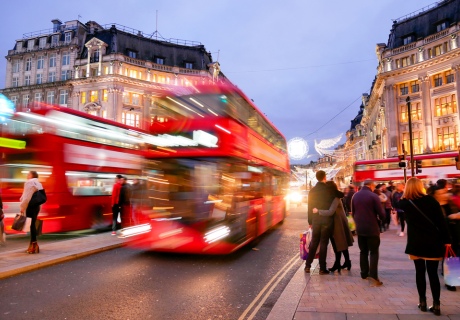 In a previous study in 2013, a group including researchers at Imperial showed that high levels of air pollution on London’s busy Oxford Street had a measurable effect on the lungs of people with asthma, compared with exposure in less polluted areas of the city. The results showed a link between the levels of ultrafine particles (including diesel exhaust particles) at street level and reductions in lung function.

In major European cities like London, we are already exceeding the recommended levels for air pollution, and these findings provide another reason why we need to curb these levels

Professor Belvisi explained the latest work adds to a growing body of evidence demonstrating the direct effects of air pollution on public health.

Combined with previous clinical exposure studies, in which people were exposed to real world levels of diesel exhaust particles in the lab, the mechanism illustrates the effects of typical exposure for people living and working in an urban environment.

“The main message here is about prevention,” said Professor Belvisi. “A significant number of hospital admissions are for people suffering with exacerbations of respiratory disease.

"If we can prevent these exacerbations which are as a consequence of the increase in symptoms, we're going to have fewer people needing hospital treatment.”

Dr Chris Carlsten, from the University of British Columbia and a co-author on the study, said: “Linking traffic-related pollution to cough broadens the scope of those affected by this ongoing public health challenge, and this can engage citizens to voice concern so that government responds with appropriate action. This is a great example of top-notch air pollution science once again motivating real-world action.”

Dr Ian Mudway, from the Environmental Research Group at King’s College London, added: “This study further highlights the adverse impacts diesel exhaust emissions can have on sensitive individuals and strengthens the scientific evidence base supporting moves to improve air quality in the UK.”

‘Mechanistic link between diesel exhaust particles and respiratory reflexes’ by Robinson, R.K. et al, is published in the Journal of Allergy and Clinical Immunology.