How birds fly determines the shape of their eggs

Bird eggs can be squat spheres or elongated ovals, and can also have one pointy end or be perfectly symmetrical.

Bird eggs have fascinated people for millennia, yet only now are biologists beginning to crack the mystery of what makes some eggs more ‘egg-shaped’ than others.

Over the years, many reasons for the spectrum of egg shapes have been proposed – such as diet, space available in the nest, or the tendency not to roll off cliff ledges – but new research published today in Science suggests flying ability is the most important factor.

The research team, led by Princeton University and including Dr Joseph Tobias from Imperial College London, measured the shapes of nearly 50,000 eggs of 1,400 bird species.

The variation in these egg shapes was then analysed in the context of the bird family tree, alongside details about nest type, clutch size, diet and flight ability. The researchers discovered there was a correlation between strong fliers and more elliptical and asymmetric eggs.

Dr Tobias, from the Department of Life Sciences at Imperial, and a senior author of the study, said: “Bird eggs – previously described as ‘a miracle of packaging’ and ‘the most perfect thing in the universe’ – have fascinated people for millennia, yet only now are biologists beginning to crack the mystery of what makes some eggs more ‘egg-shaped’ than others.”

Birds lay eggs in a diverse array of colors, patterns, sizes, and shapes, as seen in this assortment from the Western Foundation of Vertebrate Zoology collection. Credit: © Frans Lanting

The reason for this, according to the study, may be that birds adapted for flight have generally smaller bodies, with reduced space in their abdomens and narrower oviducts – the tubes that eggs are released through.

This means that there is less space for eggs to grow and a narrower exit for them. Sleek mother birds are then faced with the dilemma of how to grow their eggs in a reduced space. The answer seems to be that the eggs become longer and pointier, maintaining their volume but reducing their maximum width compared to more spherical eggs. 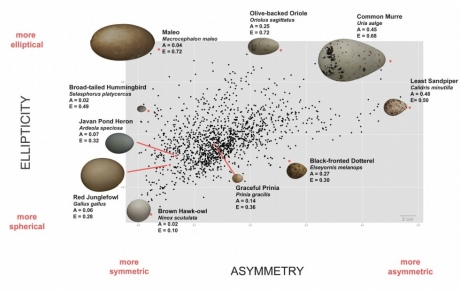 Dr Tobias added: "We found no support for the traditional ideas that variation in egg shape is caused by nest structure or placement on perilous cliff ledges, and instead found that egg size was related to the amount of calcium in the diet, and egg shape was best predicted by adaptations for powerful flight.”

To examine the underlying reasons why flight may be linked to egg shape variation, the researchers also developed a biophysical model to explain how processes in the bird’s oviduct might generate different egg shapes.

On the basis of a previous observation that the hard outer calcium shell of bird eggs can be dissolved away, leaving a membrane-encased egg that still retains its shape, the model focused on pressure applied to the membrane within the oviduct. 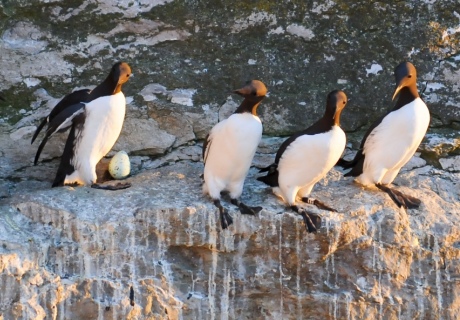 The Guillemot has fast direct flight and dives deep underwater. Its eggs are very pointy (asymmetric).

Senior author Professor L Mahadevan a joint senior author of the study from Harvard University, said: “By adjusting two basic properties – changes in the thickness of the egg membrane as a function of location, and a pressure jump across the membrane – we show that our model can produce a wide variety of egg shapes, encompassing the entire range of observations.”

The study also opens new lines of inquiry. For example, birds are unusual in that they can lay pointy, asymmetric eggs, unlike lizards or fish. Such eggs appear nowhere else in vertebrates, except in some theropod dinosaurs, which evolved into modern birds.

Dr Stoddard said: “The idea that powered flight and pointy eggs evolved around the same time is particularly intriguing. Moving forward, we are excited to explore how eggs changed shape during the dinosaur-to-bird transition.”

Owls are built for light, gliding flight and lay the most spherical, symmetrical bird eggs

The Guillemot has fast direct flight

and dives deep underwater. Its eggs are very pointy
(asymmetric)