A technique borrowed from neuroscience to see through brain tissue is helping scientists to see the fine structure of the heart.

Using an existing approach, a team from Imperial has been able to turn samples of heart tissue transparent, revealing the complex networks of tiny blood vessels which supply the tissue as well as the scaffold of collagen which holds everything in place.

The researchers believe the simple approach could potentially be used in the clinic to help patients with heart disease by showing the spread of stiff scar tissue, or to show if patients are responding to treatments

Our hearts are made up of billions of individual muscle cells called cardiomyocytes, which contract together to make the organ beat as one. These beating cells are held in place by a scaffold of collagen, the protein that enables skin and tendons to stretch.

As the tissue is so packed with muscle cells, blood vessels, nerves and collagen, it can be hard for current laser-based imaging techniques to penetrate deep enough into samples – as the light becomes increasingly scattered. Scientists get around this problem by cutting tissue samples into thin layers and imaging them individually, which is technically challenging and time-consuming and effectively renders a 3D-structure as a series of flat slices.

Now, a team based at Imperial College London has for the first time used a technique called ‘optical clearing’ to image adult heart tissue in 3D. By using solvents to dissolve fats locked up in cell membranes, they were able to reduce the density of the tissue and reduce the amount of light scattering. The result is a sample of tissue transparent enough to read text through, which reveals the intricate branching blood vessels which keep the tissue alive and the criss-crossing collagen scaffold.

Seeing below the surface

“Cardiac tissue is quite dense, using standard microscopy methods we are able to image the surface of the samples, about 20-30microns from the surface. With more sophisticated methods we can achieve 50-80 microns depth but we were never able to image a whole myocardial slice,” said Dr Filippo Perbellini, first author of the paper, published in Nature Scientific Reports, in which the researchers applied the method to both canine and human heart tissue.

He added: “We have used an existing method for preparing samples of brain tissue, but what’s new here is that we have adapted it for the heart and been able to visualise sample of around 300 microns thick. This is the first time such an optical clearing method has been used on adult cardiac tissue.” 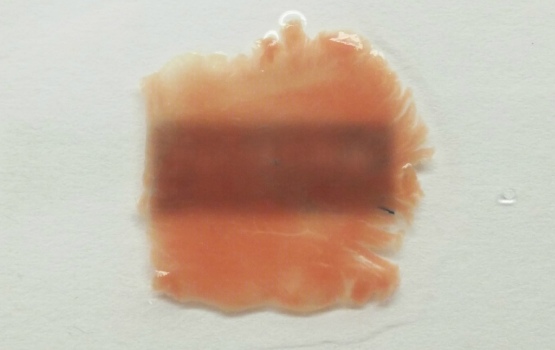 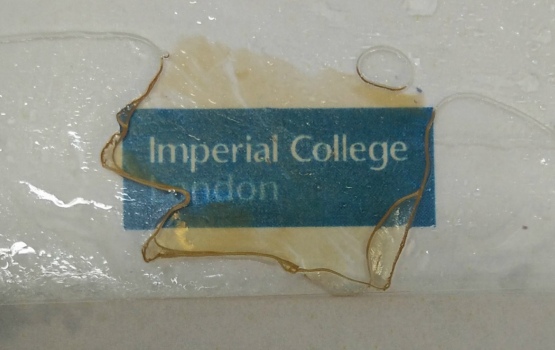 During the course of heart disease, the structure of the heart changes, with more connective collagen being laid down, reducing the tissue’s ability to stretch and flex and making the heart work harder.

The researchers say that by taking regular biopsies of cardiac tissue from the patient’s heart and making them transparent, doctors could show how the structure of the tissue is changing and follow the course of disease more accurately. The approach could also be used to show if drugs which target this fibrosis of the heart are working by looking at changes in the structure of tissue before and after treatment.

Professor Cesare Terracciano, from the National Heart and Lung Institute at Imperial, who led the research, said: “We have shown that we can image different sections of heart tissue at the same time. Using this technique we can see the position of blood vessels and the scaffold of the heart – as well as the fibrotic tissue which changes during cardiac disease.

“We have used a sample taken from human heart during heart transplantation, but we could do the same with tissue from a biopsy from a patient,” added Professor Terracciano. “As a diagnostic tool, it would be able to us tell how fibrotic the tissue is, showing the changes in structure of a failing human heart and how this disrupts it from beating as the heart becomes less elastic.”

Currently, the approach takes a few minutes to turn the sample translucent and works on tissue samples up of around 300 microns in thickness. Future studies will see the technique refined.

The researchers say that while the tissue shrinks slightly in size after samples are prepared and made transparent, the structure remains intact. However, they note that as the solution used is toxic and causes important changes to cell membranes, it is highly unlikely that the approach could be applied to living tissue immediately.

Commenting on the clarity of images achieved so far, Professor Terracciano said: “People normally think of the heart as a muscle, or a bundle of muscle cells, but we rarely think about it as a tissue which has many capillaries. I've been working with the heart for 25 years and I knew these capillaries were there, but to visualise them so clearly and to see how many there are is amazing.”

The research was funded by the British Heart Foundation Centre for Regenerative Medicine at Imperial College London.