A 1.9 million GBP project will develop new methods for treating victims who have lost or injured limbs as a consequence of the conflict in Sri Lanka.

Explosions from landmines left after the long running civil war are the leading cause of trauma and amputation in Sri Lanka. Ninety per cent of Sri Lanka’s estimated 160,000 amputees lack access to appropriate surgical procedures and prosthetic limbs, dramatically reducing their quality of life.

Now, researchers from the Royal British Legion Centre for Blast Injury Studies at Imperial College London will lead on a project to set up a regional surgical blast injury hub in Sri Lanka, thanks to funds from the UK’s Department of Health. 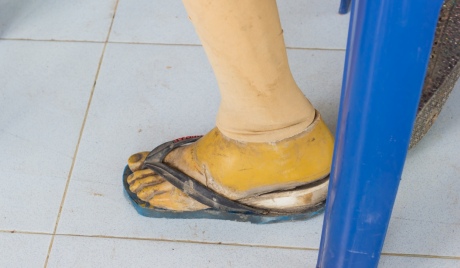 The Imperial researchers and their collaborators aim to establish a thriving research community between the UK, Sri Lanka and Lebanon. Lebanon is the repository of blast data for much of the Middle East, so its collaboration on this project is vital for sharing unique information on blast injuries, which will be used to help build up Sri Lanka’s capacity in trauma surgery.

he recent impact of terrorism in the UK demonstrates how vital it is for countries to collaborate more closely, especially when it comes to caring for blast trauma victims and the long-term effects of their injuries.

It is hoped the project in Sri Lanka will act as a gateway for other countries in the region, where information can be shared to help other populations who are suffering the trauma of blast injuries as a result of conflict.

Professor Anthony Bull, the project lead and Head of the Department of Bioengineering at Imperial, said: “The recent impact of terrorism in the UK demonstrates how vital it is for countries to collaborate more closely, especially when it comes to caring for blast trauma victims and the long-term effects of their injuries. Such major societal challenges can only be addressed through concerted multidisciplinary efforts and I am delighted to be part of such a strong team involving local and international partners. We hope that this project will have a positive impact on Sri Lanka and the wider region in terms of improving the outcomes for the injured. Ultimately, the lessons we learn in the region will be translatable, helping patients in the UK.”

During, and in the aftermath of, the Sri Lankan civil war, many civilians were injured by bombs, artillery fire, shelling, land mines, improvised explosive devices (IED), anti-personal mines and other forms of exploding munitions.

Physical injuries included shrapnel wounds, limb amputations, wounds to the nervous system and other forms of tissue damage with high volumes of patients experiencing trauma to the musculoskeletal system. A team affiliated with Medecins Sans Frontieres (MSF) have recently conducted a rehabilitation programme for injured civilians in Sri Lanka. Despite investment in surgical training and research in the country, the study highlighted a persistent lack of adequacy in services for patients.

The scope of the collaboration

The Imperial researchers, working with their partners, will firstly address the characteristics of blast injuries in the region so that they can identify when amputations can be avoided and limb salvage procedures conducted. The project will also see the development of education programmes for surgeons so that they have the appropriate skills, orthopaedic technology and surgical planning technology to improve outcomes for patients.

Imperial researchers are already developing bone-like material that could be used in the future to replace bone damaged by disease. Academics are also developing implantable glass-like material that can replace damaged cartilage and help bone knit together, following trauma. The team plans to build on this research and co-develop new types of biomaterial, made from locally sourced resources. These will be implanted in the damaged bone to help it heal, slowly dissolving over time to leave a healthy, rejuvenated bone in place.

A multidisciplinary team of co-investigators from Imperial will also co-lead on projects including Professor Molly Stevens, a regenerative expert from the Department of Materials; Professor Julian Jones, a leading researcher on biomaterials also from Materials; Professor Justin Cobb, an orthopaedic surgeon from the Department of Surgery & Cancer; Mr Shehan Hettiaratchy, a trauma surgeon from the Imperial College Healthcare NHS Trust; Dr Jonathan Jeffers, an orthopaedic technologist from Mechanical Engineering; and Professor (Colonel) Jon Clasper, a Visiting Professor at the Royal British Legion Centre for Blast Injury Studies.

This three-year project is called the NIHR Global Health Research Group on POsT Conflict Trauma or PrOTeCT at Imperial College London. It is one of 33 successful NIHR Global Health Research Groups to be funded by UK Government’s wider Official Developmental Assistance budget. The aim of this funding programme is to improve the health of patients and the public in low and middle-income countries around the world.

Lord O’Shaughnessy, UK Health Minister, said: “This funding allows our universities to strengthen their research and expertise as a leader in Global Health Research. The UK will continue to be at the forefront of health knowledge, and it is only right that we support developing nations as they improve care for patients and public.”

The Sri Lankan Civil War was an armed conflict fought on the island of Sri Lanka. It began on 23 July 1983 and started as an intermittent insurgency against the government by the Liberation Tigers of Tamil Eelam.

The aim of the Tamil Tigers was to create an independent state called Tamil Eelam in the north and the east of the island.

The Sri Lankan military defeated the Tamil Tigers in May 2009, after a 26-year military campaign, bringing the civil war to an end.

For over 25 years, the war caused major hardships for the people, the environment and the economy, with an initial estimated 80,000–100,000 people killed during the conflict.

The HALO Trust, which is the world’s largest humanitarian mine clearance organisation, have removed over 200,000 mines and continue to remove some 10,000 per year.

Mines Advisory Group charity have removed over 35,000 mines and have made safe over 32,000,000 square metres of land in Sri Lanka since the end of the war.

It is estimated that Sri Lanka still has over 75,000 square metres of land still contaminated with unexploded ordnance.