This week, the ‘toxicity charge’ – or T-charge – came into force in London. Drivers of older, more polluting vehicles that do not meet certain emissions standards will have to pay a daily fee to drive in central London.

This policy was designed in response to the discovery two years ago that many diesel vehicles had real-world emissions far beyond those reported in labs, and is part of a package of measures introduced by Sadiq Khan, Mayor of London, to combat air pollution.

Air quality policies like the T-charge, and their impact on health and the environment, were the subject of a panel discussion last week. The event was co-hosted by The Grantham Institute – Climate Change and the Environment, Policy Connect’s All Party Parliamentary Climate Change Group (APPCCG), the All Party Parliamentary Group on Air Pollution and the Royal Meteorological Society. Attracting over 70 participants, it brought together stakeholders from different, and often separate communities, to discuss how to approach air pollution and climate change challenges.

Speaking at the event, Helen ApSimon, Professor of Air Pollution Studies at Imperial College London, explained that scientists have long been aware of the disparity between results from official laboratory tests and real-world measurements, as well as the variability between vehicles. “Even within a single vehicle category, real-world emissions from different types of vehicles can differ twenty-fold,” she explained.

Transparent, independent testing of vehicle emissions is a vital part of the solution to air pollution.

“Due to this variation, some diesel cars that are branded Euro-6, the cleanest possible category, are actually as poor for the environment as some much older Euro-3 vehicles. Transparent, independent testing of vehicle emissions is therefore a vital part of the solution, while initiatives like the Mayor of London’s recently launched Clean Vehicle Checker will also have a positive impact.”

Professor ApSimon also encouraged anyone with data sets to share them openly, as Emissions Analytics have done in the form of the “Equa Index”.

Baroness Jones of Moulsecoomb, former Deputy Mayor of London and Mayor's Green Transport Adviser, has had extensive experience tackling air quality and climate change challenges. She advised that people are initially responsive to new policies like the T-charge, but that sustaining the impact will require constant effort. “The quickest way to reduce pollution is to reduce the number of cars on the road,” she said. “The T-charge is a great way to reduce car use, but it must be coupled with investment in better, cleaner, accessible public transport.” 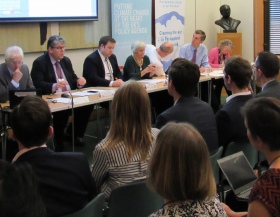 The high levels of air pollution in London are caused by the increasing concentrations of nitrogen dioxide and particulates. This is, in part, due to an increase in diesel vehicles – a choice the government encouraged in the past to reduce carbon dioxide emissions. The panel agreed that these types of policy trade-offs are inevitable, but need closer attention in the future. Professor Paul Monks, Chair of the Defra Air Quality Expert Group and Professor in Atmospheric Chemistry and Earth Observation Science at the University of Leicester, highlighted the vital role of science in informing such policy decisions. He quoted Otto von Bismark, saying, “We must focus on ‘choosing at each instant, in constantly changing situations, the least harmful, the most useful’”.

Professor Martin Williams, previously Head of the Air and Environmental Quality Division at Defra and currently at King's College London, argued that now is a great time to get air quality and climate change policy working together. “In the past, air quality was a poorer cousin to climate change in the halls of Whitehall, but that situation is now changing,” he said, noting that public concern has driven air quality up the political agenda.

The panel agreed that developing policies that carefully consider all dimensions of air quality and climate change impacts will be difficult. For example, electric vehicles may reduce some types of pollutants, but there are concerns that particulate emissions will increase due to braking. In other areas, the trade-offs are potentially more intractable – biofuels emit less greenhouse gases than fossil fuels, making them a good alternative from a climate change perspective, but their use is already increasing particulates in some UK cities.

The panel, and audience, went on to discuss how to overcome such barriers, the importance of engagement between the air quality and climate change communities, and how to maximise collaboration to ensure joined-up action on these two pressing priorities.

Some of the research being carried out at Imperial looks to combine an understanding of air quality pollution and greenhouse gas emissions to help inform integrated policy making on both of these areas. The briefing paper, Novel policy tools to assess the environmental impact of air pollutants, can be downloaded on the Grantham Institute website.

The APPCCG is using the discussion at the event as the basis for their submission to the joint committee inquiry on air pollution, which is being run by the Transport, Health, EFRA and Environmental Audit Committees. If you would like to contribute to the submission to this inquiry, please contact Alyssa Gilbert.