One of Imperial's most successful alumni groups held a special gala with President Alice Gast in Hong Kong at the weekend.

The Imperial College Alumni Association of Hong Kong brought together more than 150 alumni to mark 35 years since its foundation.

Hong Kong is home to 3,000 alumni and 250 current students. Research ties are growing fast, with 500 research papers published by Hong Kong academics with their Imperial peers within the last five years.

This growing collaboration and innovation was a focal point for the evening, which was organised by a talented team of volunteers led by ICAAHK Chair Daniel Pun (Civil and Environmental Engineering 1992). The event began with a panel discussion chaired by Dr Paulina Chan (PhD Electrical and Electronic Engineering 1977), champion of ICAAHK’s mentoring programme.

At a time when many “reject globalisation and the role of experts”, it is “more important than ever for universities to engage communities and young people” who may otherwise be left behind – one of the drivers behind Imperial’s new Invention Rooms. 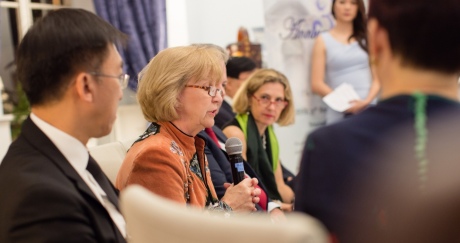 Susannah Morley, Director of Programmes and Partnerships at the British Council, emphasised the importance of trust and mutual understanding, when collaborating across otherwise closed boundaries. She also highlighted the UK’s continued status as the top destination for Hong Kong students, with more than 120,000 Hongkongers studying in the UK since 1997. 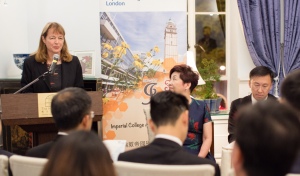 Michael Kwok (Civil Engineering 1984), chair of Arup East Asia, drew on his experience leading major infrastructure projects in London, Beijing, Shanghai and Hong Kong, to talk about the growing importance of smart cities to the global economy. “Making better cities and making existing cities better are two of the critical challenges of our time,” which needs deep collaboration across all sectors, he said.

Richard Lancaster, CEO of CLP, agreed, pointing to the electricity industry’s efforts to anticipate and deal with technology-led disruption, through smart grids, smart meters and preparing the infrastructure for electric vehicles in Hong Kong. 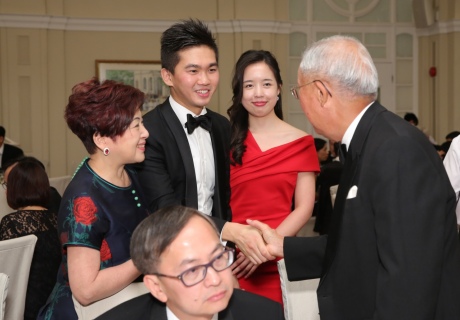 Dr Paul Cheung (Electrical Engineering 1973, PhD 1978), a biomedical engineer and computing professor at the University of Hong Kong, used the session to “disagree with the vision of Hong Kong as a ‘super-connector’… that’s not good enough, it is insufficient.” Instead, he argued, Hong Kong’s role should be as the region’s “super-integrator,” bringing collaborators together.

These ever closer research and innovation ties were the focus of Hong Kong Chief Executive Carrie Lam’s visit to the College last month.

“Three years ago I took my children back and we stayed in South Side at the summer accommodation.  It was such fun to show them around and be back.” 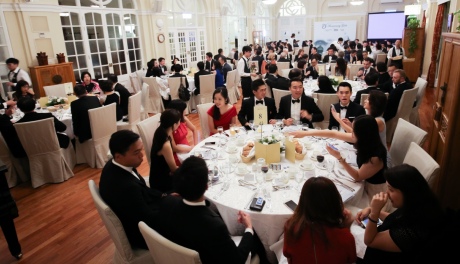 Another influential alumnus Clement Woo (Mechanical Engineering 1989), a District Councillor for Tai Po, looked back on how he aspired to attend Imperial from the first day of his A-levels: “My physics teacher said ‘if you want to be an engineer you should go to Imperial.’” 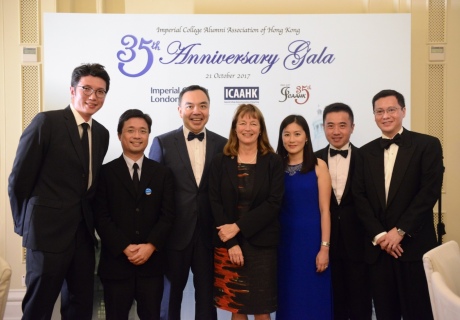 During the reception, Leon, a successful entrepreneur currently taking a close interest in the wine industry, networked with other innovators, including Zoe Niu (Mathematics 2005), who founded prominent fintech startup Ricequant.

She said: “The three years I spent studying maths at Imperial was some of the most beautiful and memorable times of my life. I met the most amazing friends – I know that’s common in terms of the university experience, but those relationships really do change your life.” 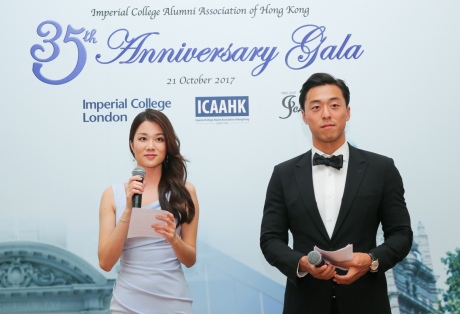 Marium Ghafur (MBA 2000), who worked for several years at KPMG, mingled with Natalie Yip (Chemical Engineering 2016), who joined the company soon after graduating from Imperial. Natalie benefited from ICAAHK’s mentoring scheme, receiving counsel during her studies on internships and career opportunities. 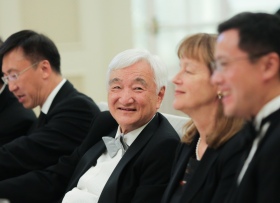 Among the many Imperial supporters in attendance was Dr Richard Lee (Chemical Engineering 1960, PhD 1964). Several generations of his family studied at the College since the 1950s, and Dr Lee and his family’s extraordinary gifts include support for multiple PhD scholars, research into antimicrobial resistance, and most recently for the Lee Family – Faculty of Medicine Scholarships, an endowed scholarship programme offering one full fellowship every two years, in perpetuity.

Over dinner, Professor Gast returned to the forum’s main theme. “Collaboration across geographic boundaries and academic disciplines is essential to a vibrant academic and scientific community.  It produces breakthrough solutions that are the result of a diversity of thought, expertise and perspective,” she said. “Universities must remain true to their values of openness and inclusion. We must continue to collaborate across borders.” 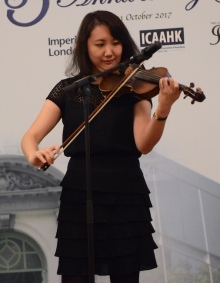 Guests were treated to an impressive musical performance from violinist Heidi Luk (Biochemistry with Management 2010). Heidi, who won several scholarships for her musical and scientific talents, went on to complete an MMus at Imperial’s neighbouring institution, the Royal College of Music.

Imperial’s Director of Alumni Relations Nicola Pogson said: “The fact that this is now one of the oldest and most established groups, is a testament to the dedication and commitment of many alumni who year after year have contributed their time and energy to building a strong and connected community.”

ICAAHK was founded in 1982 with support from the then-Rector Lord Flowers and Peter Pun (Civil Engineering 1960).

During the 35th anniversary celebrations, Mr Pun’s son and current ICAAHK chair Daniel Pun (Civil and Environmental Engineering 1992) explained how, over 35 years, “ICAAHK has grown to a size of more than 800 members from all disciplines and ages,” serving as “a bridge between Imperial College London and local alumni”, as well as seeding success through initiatives like scholarships and a thriving mentoring programme.

The ICAAHK mentoring programme, championed by Dr Paulina Chan and Ken Ho (Civil Engineering 1984, MSc 1985), was created in 2013. It now has more than 90 mentors supporting 350 mentees, matching them by academic field and professional sector.

Speaking in Hong Kong, President Alice Gast praised ICAAHK’s “incredible impact and fruits of that support for generations and generations of students” through mentoring, scholarships and community.