Do stents bring relief for angina?

Researchers at Imperial College London have explored the placebo effects of a coronary angioplasty procedure with stents for the first time.

Coronary artery stents are lifesaving for heart attack patients, but new research suggests that the placebo effect may be larger than previously thought.

Results from the trial show that the treatment had no significant additional benefit on patient symptoms or quality of life.

Carried out in the UK and led by researchers at Imperial, the trial provides the first evidence of a direct comparison between stenting for stable angina and placebo, for patients on high quality tablet treatment.

The researchers have published their findings in The Lancet and presented them at the Transcatheter Cardiovascular Therapeutics 2017 conference in Denver, Colorado.

Dr Rasha Al-Lamee, lead author of the study from the National Heart & Lung Institute at Imperial College London, said: “The most important reason we give patients a stent is to unblock an artery when they are having a heart attack. However, we also place stents into patients who are getting pain only on exertion caused by narrowed, but not blocked arteries. It’s this second group that we studied.”

“Surprisingly, even though the stents improved blood supply, they didn’t provide more relief of symptoms compared to drug treatments, at least in this patient group,” said Dr Al-Lamee, who is also an interventional cardiologist at Imperial College Healthcare NHS Trust.

“While these findings are interesting and deserve more attention, they do not mean that patients should never undergo the procedure for stable angina. It may be that some patients opt to have an invasive procedure over taking long-term medication to control their symptoms,” she added. 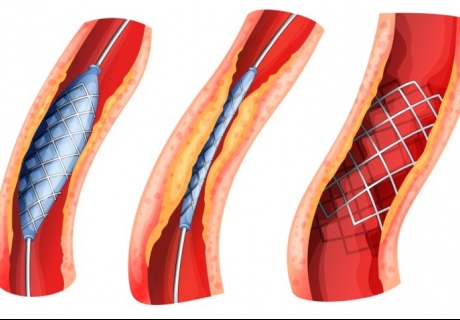 An estimated 500,000 patients around the world undergo PCI each year for stable angina, and the procedure is thought to bring substantial relief from symptoms for patients. However, since the procedure was introduced it has been unclear whether the relief of symptoms is due to the treatment or to a placebo effect.

As part of the multi-centre ORBITA trial, the researchers recruited 200 patients through hospitals in London and the south of England. All patients had stable angina, and had a narrowing in one single coronary vessel. Once enrolled the patients had a six-week phase of intensive medical treatment in which the medications used to treat angina were introduced and increased to maximal doses.

Patients were randomised to receive either a heart stent, or to undergo a placebo procedure in which they had an angiogram procedure, but did not receive the stent.

Of the patient group, half received the stent and half had the placebo procedure. For the next six weeks the patients and their doctors did not know which one they had had.

Both before and six weeks after undergoing the procedure, patients had exercise tests to assess how fast they could walk on a treadmill while their heart and lung function were measured. The key outcome was a change in the amount of time they could exercise after the procedure.

They found the average increase in overall exercise time was 28·4 seconds for patients who had PCI and 11·8 seconds for the placebo group. However, the difference between the groups was not statistically significant, meaning they could not say the effect was down to the stent, or down to chance. There were also no significant differences in patient-reported improvement of symptoms in either group.

While these findings are interesting and deserve more attention, they do not mean that patients should never undergo the procedure for stable angina

However the tests did confirm that stenting significantly relieved the narrowing in the coronary artery and improved the blood supply to the heart.

This was puzzling as the researchers had expected that exercise capacity and symptoms would improve once the artery had been opened and the blood supply improved.

More analysis is expected from the ORBITA trial as the researchers aim to delve deeper into the data to see whether there are subgroups of patients whose angina improves more after stenting.

“It seems that the link between opening a narrowing coronary artery and improving symptoms is not as simple as everyone had hoped,” said Dr Al-Lamee. “This is the first trial of its kind and will help us to develop a greater understanding of stable angina, a disease which affects so many of our patients every day.”