The effects of climate change, such as droughts, wild-fires and extreme weather are a particular concern for those living in countries where people cannot afford to protect themselves against such disasters.

Globally, 70% of the damage caused by climate change events, and 98% in developing countries, doesn’t get compensated unless the government steps in, delegates heard at the 23rd Conference of the Parties (COP23) to the United Nations Framework Convention on Climate Change (UNFCCC), which is taking place in Bonn, Germany.

Climate risk insurance – which provides financial compensation for people following climate-related disasters – could be a powerful tool to build resilience to global warming trends, but financial concerns are holding up progress.

These concerns were raised by experts at an official side-event organised by the Imperial College London delegation at COP23, with Munich Climate Insurance Initiative (MCII)_and Munich Re Foundation. 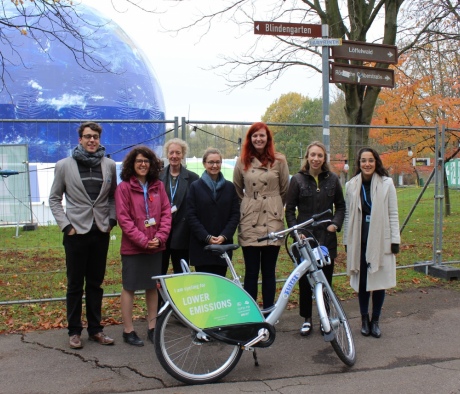 The need for climate risk insurance is clear

Climate change is already affecting people’s lives worldwide, and are predicted to worsen as greenhouse gases from human activities cause further global warming.

“By looking at the changing distribution of different weather parameters, such as temperature or precipitation, we know that, as a result of climate change, some weather extremes are becoming more frequent,” said Professor Joanna Haigh, co-director of the Grantham Institute – Climate Change and the Environment, Imperial’s Global Institute addressing the challenges of global warming and environmental change.

Insurance can be a mechanism to prevent livelihoods falling back into poverty after extreme weather events.

“For example, in July 2010, Russia experienced a series of heatwaves: such events used to have a 99-year repeat time but now this is reduced to about 30 years," she said.

The COP23 conference is presided over by Fiji who, drawing on their experience as a Small Island Developing State in the Pacific, have prioritised discussions on accelerating climate action for the most vulnerable nations. Imperial’s event addressed the topic of climate risk and insurance and its relevance to developing nations.

According to Christian Barthelt, Project Manager at the Munich Re Foundation, climate risk insurance has broad, multi-faceted benefits. “It is much more than just a pay-in pay-out scheme,” he said.

“Insurance can cover many aspects of disaster risk management. It’s a constantly evolving process that can be understood as a cycle, incorporating research, data and constant improvements. This approach can bring transparency, a much greater awareness of climate-related risk, and improved resilience – if applied correctly.”

Everyone must be involved

Speakers at the event emphasised that climate risk management is a long-term intervention, requiring commitment to improve communities’ resilience to climate change and their role in avoiding its worse effects.

“An effective insurance policy depends on partnerships between the public and private sector, and the active participation of communities at risk,” said Barthelt.

“You need to promote the project on the ground, develop a sustained dialogue with the different stakeholders, and ensure the long-term commitment of all those involved.”

This sentiment was echoed by Soenke Kreft, Executive Director of Munich Climate Insurance Initiative: “The whole thing is rooted in international cooperation – shared responsibility between countries, both developed and developing, access to data, and the political will to see projects through long term”.

Momentum is growing, but there’s more to do

Over the past few years, climate risk insurance has been recognised by major policy fora, including the Paris Agreement, the UN Sustainability Development Goals and G7 and G20 discussions.

However, Simone Ruiz, Managing Director of Allianz Climate Solutions, highlighted that only 2% of the developing world is insured against climate disasters.

“In developing countries, 98% of the damage caused by climate change events doesn’t get any compensation unless the government steps in – and of course, behind the damage there are people who lose their homes, work places, or worse,” she said. “Insurance can be a mechanism to prevent livelihoods falling back into poverty after extreme weather events.” 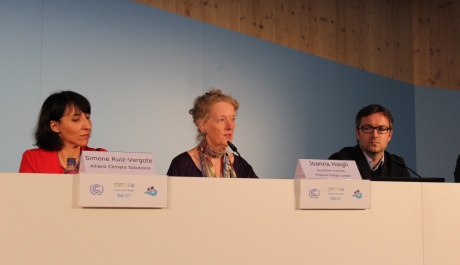 Admasu Feyisa from Ethiopia’s Ministry of Finance and Economic Cooperation, introduced the Climate Vulnerable Forum, which consists of 48 member countries particularly vulnerable to the impacts of climate change. He explained that most member countries haven’t yet started implementing climate risk insurance because of financial and technical constraints.

“Over the past few decades, these countries have suffered from repeated extreme weather events. Their frequency disrupts any recovery progress, and has significant adverse effects on economic, social and environmental conditions,” he said.

To overcome these constraints in vulnerable countries, the private sector, governments and the populations at risk need to work together to develop approaches that enable insurance to be used as a tool to promote sustainable development and adaptation to climate change.

One approach discussed was a pooling of contributions beyond national boundaries to share the financial outlay between more governments. “Although this would require would require significant political will, it could deliver significant social and environmental dividends,” said Soenke.

The Imperial College London delegation will be at COP23 for the duration of the conference, meeting with the wider climate change community to share ideas and reach out to governments, industry players and others. Read the Grantham Institute blog for more on the team's activities at COP23.

Societies face the dual challenge of how to reduce disaster risks and at the same time help the quick recovery of those who suffer from unavoidable disasters.

Insurance can play a valuable role in achieving both objectives. By allocating a price to the risk, insurance signals the risk of living in a hazard-prone area: a higher premium implies a greater risk, which can discourage people from living in such areas. Insurers can also require applicants to meet certain standards or undertake specific measures to reduce the financial impacts if disaster strikes.

It can also help victims of unavoidable disasters to recover quickly, helping to avoid poverty. By pooling risks, insurance allows the losses of the few to be shared among many policyholders. So, a loss that would have been catastrophic for an individual is borne by many.

Moreover, insurance can enable access to further financial resources (e.g. credit lines) that in turn might allow for better building practice or stronger financial resilience in case of an adverse event.