Imperial will maintain its internationalism in the face of Brexit, Professor Alice Gast told France's most influential newspaper.

In an interview with Le Monde, Professor Gast spoke of Imperial’s intention to “remain the UK’s most international university,” working with industry, European and international colleagues to develop policies that will strengthen research and the wider economy.

These policies include mobility guarantees for researchers after Brexit. “For example, I support the idea that a European researcher participating in UK government or CNRS programmes would be entitled to mobility visas after Brexit, without having to go through complicated administrative procedures.”

“We must continue to attract researchers and entrepreneurs who are excellent and have good ideas,” she said.

When asked about the government’s response to Imperial’s arguments on Brexit, Professor Gast said: “The UK strongly values its universities and research. That makes me optimistic. Politics should not damage these institutions. For now, the government has committed to funding research and the ability to collaborate. 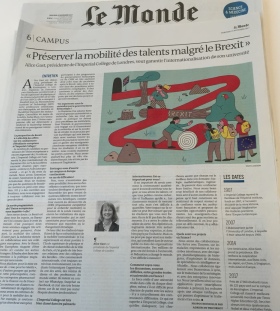 "But we want to find ways to continue our mission and keep European researchers and lecturers. For students, it's the same: we want to keep our doors open. Today we have more than 680 French students, very attracted by science and engineering at Imperial.”

The newspaper highlighted that the “very francophile American professor” is a Fellow of France’s Académie des Technologies and undertook postdoctoral study at ESPCI in Paris. She also received an honorary doctorate from UPMC in 2016.

Imperial has more than 3,500 alumni in France – many of whom met Professor Gast and a group of researchers at a special event for alumni and friends at UPMC in Paris last week.

Professor Gast used the interview with Le Monde to speak of the “excellent cooperation” that Imperial enjoys with French institutions. In the last decade, Imperial researchers have co-authored more than 8,000 research papers with their collaborators in France.

The full interview can be read in the 15 November edition of Le Monde and online.