In 2017, the film ‘Hidden Figures’, which told the story of the struggles and success of NASA’s African-American women, inspired a new International Visitor Leadership Program (IVLP): #HiddenNoMore: Empowering Women Leaders in STEM. Fifty participants were selected to travel the US to meet researchers, engineers and educators, and explore ways to increase the participation of women and girls in science. Exciting, sure … and somewhat terrifying! 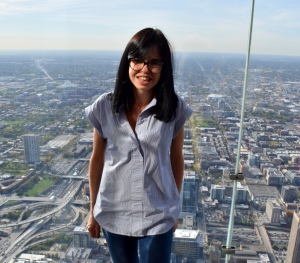 Jess at the top of the Willis Tower, Chicago

During the trip we were introduced to some of the most phenomenal women working in America today. For example, Sky Kelley, the first African American woman to work on the trading floor of Wall Street: “only 15 black women in the world have raised $1 million. I’m going to be number 16”. Or Dr Adriana Ocampo Uria, Venus Lead Scientist at NASA, an immigrant from Italy who arrived in America speaking no English and now leads the $1 billion New Frontiers Program. And Ikumi Yoshimatsu, the first Japanese woman to win Miss International, who went on to fight Japanese law to protect women from stalking and harassment. I have a notebook full of stories, but here I will mention just a few of the inspiring talks and important ideas we discussed during our time on the programme.

“Know who you are”

Step-up Susan Goldberg, the first woman to be editor-in-chief of National Geographic in its one-hundred and thirty-year history. Under her leadership, National Geographic published a Pulitzer-prize winning issue about what gender meant around the world. Goldberg talked us through the issue, from inception – looking at girls’ status and access to education across the world – to development – realizing that boys have a hard time too, and considering the experience of transgender people – and the fallout – hate mail, ten thousand cancelled subscriptions. It was fascinating to hear Susan talk about how National Geographic uses its huge social media presence to bring important and controversial issues into public conversation.

“I have failed – but I was not afraid. I owned the failure”

Sandra Cauffman, Deputy Director of NASA’s Earth Science group, grew up in poverty in Costa Rica speaking no English. She worked two jobs alongside her Maths and Physics degree and wasn’t going to let lack of a green card stop her from working at NASA. In NASA’s sixty-year history there have only been six Hispanic women, like Sandra, in senior positions. Her advice to “find your own voice…don’t mistake words for voice" and "put as many tools as you can in your toolbox”, had all 48 IVLPs captivated.

“The best man for the job…was a woman”

Colonel Jill Morgenthaler was one of three women amongst 50,000 men in the U.S. army. Aged 22 she was asked to command her division across the de-militarized zone between North and South Korea – after a momentary lapse of confidence, she did it: “well I kept saying ‘I can be a leader’…so I put on my safety belt”.

“Breaking through the polycarbonate ceiling”

Professor Geri Richmond is the global science envoy for the US State Department who, alongside running an active research group, travels the world training international women scientists. She visits places like Indonesia, Vietnam and Cambodia, connecting researchers to people in the U.S. and teaching them how to mentor, write grants and be internationally successful scientists. America is committed to getting scientists involved with policy and improving the scientific literacy of the public. Just about every scientist I met in D.C. was part of the AAAS Science and Technology Policy fellowship program, using scientific knowledge to drive international competency. At the University of Orgeon, Professor Richmond teaches science literacy to arts students, and classes like “Physics for Poets” and “Rocks for Jocks” are commonplace in colleges across the country.

I learnt that for the older generation in middle America, building a sense of community and volunteering their time is a big deal. In Nebraska they are so committed to retaining their community that, to avoid a ‘brain-drain’, industry and academic institutions have partnered with educators to design a ‘STEM eco-system’, helping young people recognise how their skills are needed close to home. 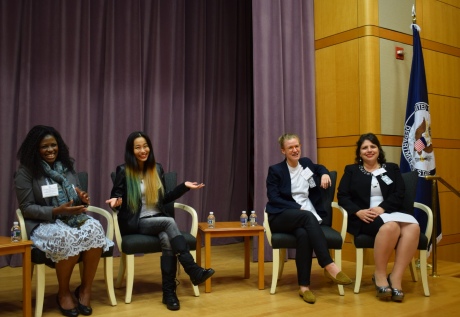 At present there is no Athena Swan award scheme in the US, no laws regarding maternity leave and no Daphne Jackson Trust fellowships for people returning to science from career breaks. It doesn’t mean that there aren’t initiatives – during our three weeks we came across hundreds – it just means that they are patchy and often launched by trailblazing individuals rather than at an institutional level. The challenges of early career research on temporary contracts with increasing responsibilities appears to be universal.

“This is not just a pipeline problem”

Rather than focus on recruitment campaigns and graduate schemes, we need to reconsider what is happening to women in the workplace. In the US women quit the private tech sector at twice the rate of men within their first ten years of employment, and they aren’t necessarily leaving to start families – sometimes it's just about finding other sectors in which they are better supported. The recent stories of harassment and sexual abuse within astrophysics are a wake-up call to an academic world dominated by dangerous power relationships We are lucky at Imperial to have Dr Emma Chapman, Royal Astronomical Society Research Fellow in the Department of Physics. Alongside her research, Emma has spent the last year developing the 1752 Group, a UK-based research and lobby organisation working to end staff-to-student sexual misconduct in higher education.

Mentoring and sponsorship were a central theme of the trip: finding people who can guide, support and champion you and your career. Good mentors had impacted the careers of just about everyone we interacted with.

For several of the IVLPs, their efforts were lost to a women in science echo chamber. Despite the plethora of diversity initiatives in the UK, academia and industry have a long way to go in addressing gender balance issues. The involvement of those in positions of power who can change culture in these conversations shouldn’t be an afterthought, but a requirement.

The IVLP trip did not only allow me to meet organisations and individuals within the US, but to build networks with the rest of the international participants, many of who have become great friends. It turns out that what unites us is much, much bigger than that which divides us.