Medium-sized carnivores most at risk from environmental change

In a surprise ecological finding, researchers discover medium-sized carnivores spend the most time looking for food, making them vulnerable to change.

Mammalian predators (commonly called carnivores) spend a significant part of their day foraging for food, and the more time they spend, the more energy they use. This makes predators that spend a long time foraging more vulnerable to changes in the environment that affect their primary resource: their prey.

Our approach could be used to better understand the diets of other groups of species as well improving our knowledge of threats of climate change and habitat loss in a wider range of species.

It had been thought that foraging time decreases as animal size increases, but new research by Imperial College London and the ZSL (Zoological Society of London) shows this is not the case.

The team used data on land predators worldwide, from small predators such as weasels to some of the largest such as tigers, to demonstrate that among all species, medium-sized ones (between about one to ten kilograms in weight) spent the greatest part of their day foraging. Examples of such medium-sized carnivores include the Malay civet, Iriomote cat, Leopard cat and Crab-eating fox.

The results, published today in the journal Nature Ecology & Evolution, provide methods based on a new mathematical model for predicting the vulnerability of animals to environmental changes resulting from habitat loss and climate change.

Study co-author Dr Samraat Pawar, from the Department of Life Sciences at Imperial, said: “We propose a simple mathematical model that predicts how foraging time depends on body size. This can help predict potential risks to predators facing environmental change.

“Our approach could be used to better understand the diets of other groups of species as well improving our knowledge of threats of climate change and habitat loss in a wider range of species.” 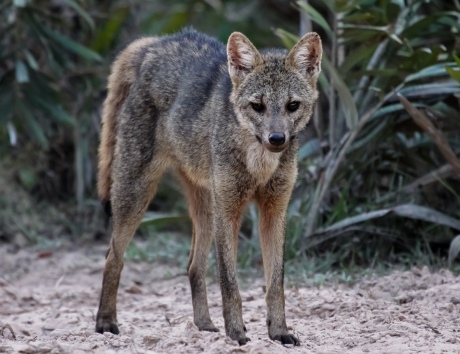 Co-author Matteo Rizzuto, formerly a Master’s student in the Department of Life Sciences at Imperial, noted that each species’ vulnerability will also depend on the kind of prey they feed on: “If they are able to adapt their diet and diversify their prey, they may fare better.”

Not enough bang for the buck

To test their theory about body size and foraging time, the team used carnivore activity data from across the world, collected through studies using tracking methods such as radio collars and GPS. They looked at data from 73 land-based carnivore species.

The mathematical model developed by the team pinpoints the reason why the surprise result might be so. Dr Chris Carbone, the co-author at ZSL, explained that foraging habits and the size-difference between predators and prey are likely the cause.

He said: “Medium-sized predators are forced to search for food for longer periods of time on a daily basis because they tend to feed on prey that are small compared to their own size.

“Prey that are much smaller than a predator are hard to find and catch, and therefore do not easily satisfy the predator’s energy needs and provide insufficient ‘bang for the buck’.”