'Let's talk about Tuberculosis' harnessed the linguistic skillsets of local residents to review an animated film about latent Tuberculosis (TB).

The animation translation project, led by a group of Imperial College researchers from the NIHR Health Protection Research Unit in Respiratory Infections, the TB Research Centre and the  National Heart and Lung Institute (NHLI), has involved translation of the film into the most common languages spoken among communities eligible for latent Tuberculosis testing and treatment.

Tuberculosis is a bacterial infection that mainly affects the lungs, but it can affect any part of the body, including the abdomen glands, bones and nervous system.

The linguistic skillsets of the White City community are incredibly diverse

The symptoms of active TB of the lung are coughing, chest pains, weakness, weight loss, fever and night sweats. However, a latent TB infection causes no symptoms since the person's immune system acts to ‘wall off’ the bacteria.

In the UK, individuals with the highest risk of having latent TB are those are born in countries of high TB incidence. It is essential that greater awareness is raised within these communities – especially in cases where English is not spoken as a first language.

This focus group was organised to collect feedback from resident native speakers of Hindi, Punjabi, Bengali, Farsi, Gujarati, Pashto, Somali and Tagalog before the animated film is rolled out through Clinical Commissioning Groups (CCGs) nationwide. Translations of the animation will be recorded and subtitled to make the material as accessible as possible. 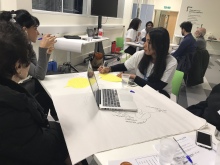 Hosted at The Invention Rooms, the focus group offered White City residents the opportunity to talk to doctors, nurses and scientists who specialise on working with Tuberculosis.

Mica Tolosa-Wright, Research Technician at the NHLI and co-organiser, said: "It was brilliant to be involved in this focus group with local residents to raise awareness about latent TB. The linguistic skillsets of the White City community are incredibly diverse and tapping into this has ensured that our animation is accessible to the languages spoken among communities eligible for testing and treatment." 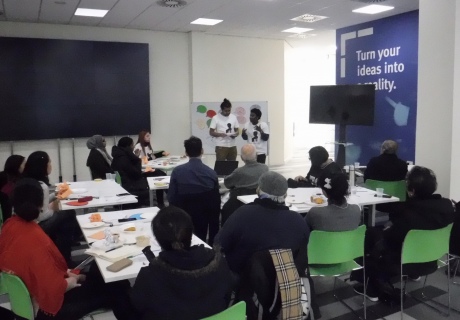 Let’s talk about Tuberculosis is one of the recipients of Imperial’s Societal Engagement Seed Fund – a new initiative helping staff and students engage the wider public with their research and education activities.

Other recipients of Imperial’s Societal Engagement Seed Fund include What the Tech?!, a student-led digital literacy programme, and True Cut: Making sense of our mistakes, a theatrical production which focuses on engaging patients, the public, healthcare professionals, academics and students to foster more meaningful conversations around mistakes in healthcare.

Anyone who would like to find out more about the College’s programme of community engagement can contact whitecity.community@imperial.ac.uk