Could deer hold clues about the link between malaria resistance and sickle cell?

Scientists have identified the genetic mutations that cause sickle cells in deer, according to new research in the journal Nature Ecology & Evolution.

The scientists from Imperial College London say although their research is in its early stages, it shows promise that certain species of deer might potentially be a surprising model in which to study the effects of sickling in humans such as resistance to malaria.

The very mutation that causes debilitating symptoms is the same one that protects against malaria...We hope to discover why this is.

The team of researchers led by Dr Tobias Warnecke from Imperial’s Institute of Clinical Sciences, which included Professor Vincent Savolainen from the Department of Life Sciences, analysed the genetic make-up of sickled and non-sickled red blood cells (RBCs) in 15 species of deer, and compared them to our current knowledge of how the trait came about in humans. They found that the sickle trait in deer took a different evolutionary path to the trait in humans.

Sickle cell disease is an inherited blood disorder that distorts blood cell shape in humans. Where RBCs are usually doughnut shaped and easily pass through blood vessels, the trait misshapes RBCs into crescent or sickled formations. 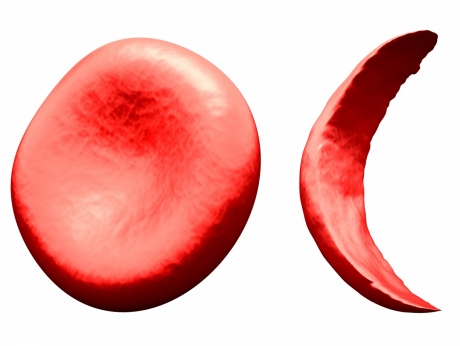 A normal shaped red blood cell (left) versus a sickle shaped one.

In humans, these misshapen sickled RBCs get stuck and build up in small blood vessels and organs, causing severe pain, anaemia, lack of oxygen, and damage to the organs, vessels and joints. However, unlike humans, deer with sickle cells don’t suffer from the debilitating symptoms. This makes them interesting models in which to study how genetics influence the characteristics of sickle cells, in for example malaria resistance. 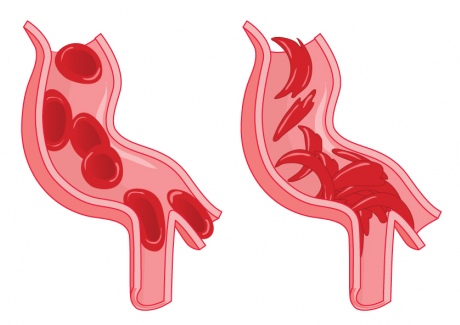 Since the 1960s, scientists have known that both deer and humans can have sickle cells, and that the trait is linked to mutations in a blood protein called beta globin. However, until now they did not know whether sickling is caused by the same mutation. To find out, the researchers mapped the mutations that cause the trait in deer and compared it to the human disease mutation.

In warm areas with high malaria rates such as parts of Africa and Asia, the mutation that gives rise to sickle cell disease is widespread in humans and deer. This gives an evolutionary advantage because those who carry one healthy and one mutated copy of the gene are more resistant to malaria. However, the protective mechanism is poorly understood.

Surprisingly for the researchers, they found that the sickle trait in deer had taken a different evolutionary path to the trait in humans. In deer with sickled cells, three of the 146 amino acids, or ‘building blocks’, that form beta globin differ systematically from deer species that do not sickle. However in humans with sickled cells, the change in shape is caused by a completely different mutation that affects a different part of the gene.

The researchers say that although the genetic architecture of sickling is different between humans and deer, they both produce RBCs of the same shape. In both species, the mutations cause long fibres to form, which become intertwined and grow long enough to distort the shape of the cell.

Dr Warnecke said: “We still don’t know how sickling protects people from malaria, but we have lots of ideas to explore. If it turns out that sickling in deer also happens because it protects against malaria, then we may be able to start thinking of deer as a model to help us understand the link.

“The very mutation that causes debilitating symptoms is the same one that protects against malaria. By comparing the genetic bases of deer and human sickling, we hope to discover why this is, and how we can use that knowledge to alleviate symptoms of sickle cell disease and malaria.”

The research was funded by the Medical Research Council.