The UK has the capacity to develop new green industries for capturing harmful carbon dioxide emissions from industry and storing them deep underground, but more investment is needed to further develop the relevant technologies and infrastructure, say scientists in new research published today.

The authors, from the Grantham Institute for Climate Change at Imperial College London, have published two briefing papers that highlight the potential opportunities associated with adopting Carbon Capture and Storage (CSS) technologies and the challenges involved. The researchers say developing CCS on a large scale in the UK could promote economic growth, spawning new green technology companies and services that would build and maintain the CCS infrastructure.

CCS technologies are designed to trap and transport carbon dioxide (COâ) from industry, via pipelines, and store it in offshore underground reservoirs. CCS technology has been used extensively in the oil industry to recover fossil fuels from reserves and trap waste emissions in rock. However, CCS has never been used on a large scale to capture emissions from industry and power plants.

In the briefing papers, the authors say that the UK is in a unique position to develop CCS on a large scale. It has extensive oil industry expertise and a concentration of industries along the coast that are close to depleted offshore oil and gas reservoirs, which can store COâ. 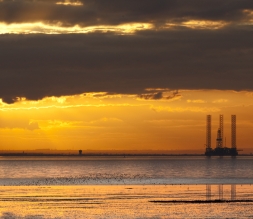 A concentration of industry near underground depleted oil and gas reservoirs make Humberside in the UK an ideal place for CCS, say researchers

A large-scale CCS network could be built along the east coast of the UK, suggest the researchers. This would use a pipeline network to carry COâfrom industries to local storage facilities called hubs, which would pump the gas onwards to offshore to underground reservoirs.

Humberside in the north of England is one place where a CCS network could work effectively, say the authors. Humberside has several existing power stations that emit 60 mega tonnes of COâper year. A pipeline network could pump emissions to hubs based in Humberside and on to underground reservoirs in the Southern North Sea.

However, the authors stress that there are still a number of obstacles to overcome before CCS can play a significant role in helping to mitigate climate change. More research needs to be done to improve current technologies for capturing COâso that they use less energy and are more cost effective to run. The researchers say that the UK government and industry needs to invest more money in research and development, so that rapid improvements can be made to CCS technologies.

Governments will also need to develop credible policies and regulatory frameworks, say the researchers, to assess and manage the economic, health, legal and environmental issues associated with the full-scale use of CCS.

Dr Paul Fennell, one of the briefing paper authors from the Department of Chemical Engineering and Chemical Technology at Imperial College London, says: “The transition to full scale usage of CCS is quite a challenge as we’ll need to store several thousand times more COâthan we do at the moment for CCS to have a significant impact on our environment. We need to design CCS systems that can cope with holding, transporting and storing these vast COâloads from our industries and power stations.”

ProfessorMartin Blunt, briefing paper author and Head of the Department of Earth Science and Engineering at Imperial College London, says: “The UK is in a unique position to really capitalise on carbon capture and storage technology, thanks to a combination of industry expertise, the right kind of geology and concentration of industry along the coast. We could be a beacon to other countries, showing them how new industries could help mitigate the effects of climate change and generate jobs in the process. However, the UK is moving at a frustratingly slow pace. Our research shows that carbon capture and storage technologies are feasible and safe on commercial scale, however, governments and industry need to do more to ensure that CCS can play a vital role in reducing carbon emissions.”

1. About the Grantham Institute for Climate Change at Imperial College London The Grantham Institute for Climate Change is committed to driving climate change related research and translating it into real world impact. Established in February 2007 with a £12.8 million donation over ten years from the Grantham Foundation for the Protection of the Environment, the Institute's researchers are developing both the fundamental scientific understanding of climate change, and the mitigation and adaptation responses to it.

The Institute intends that this work should be directly relevant to policy and decision makers. The Grantham Institute is unique among climate change research centres because it is situated at the heart of Imperial College London, one of the world's leading science, technology and medicine universities. The policy and outreach work that the Institute carries out is based on, and backed up by, the leading edge research of the College's academic staff.

In 2007, Imperial College London and Imperial Col l eg e Healthcare NHS Trust formed the UK's first Academic Health Science Centre. This unique partnership aims to improve the quality of life of patients and populations by taking new discoveries and translating them into new therapies as quickly as possible.