Nowadays it's quite easy to structure semiconductor crystals on a sub-nanometer length scale. In these tiny structures , the rules of Quantum  Mechanics, allow us to tailor the energy levels of the electrons in the crystal; in effect we can make our own "artificial atoms, and they have optical properties that we can tailor to our needs. 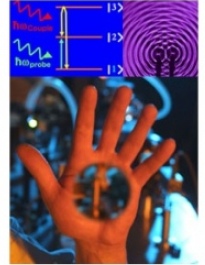 Schematic of how the quantum mechanical scattering amplitudes of an electron can interfere, when their wavefunctions are made coherent with a control laser beam, to give “Electromagnetically Induced Transparency”. The scattering wave amplitudes of green and yellow scattering pathways cancel, freezing the electron in the ground state, in a “matter wave” analogue of the Young’s double slits experiment. The photo on gives some idea of what this would look like if we could do this with a human hand (which we can’t, yet).

Using these we are copying a range of coherent optical effects first seen by the atom spectroscopists, but with the convenience of an all-solid state host. Electromagnetically-Induced-Transparency (EIT), uses a “control” beam, to generate a QM interferenec effects inside these artificial atom.. As long as the beam is on, the electrons are effectively "frozen" in their ground state. They stop interacting with light and the atom dissappears. We managed this vanishing trick with our “artificial atoms”, semiconductor crystals, and it caused something of a stir in the papers. 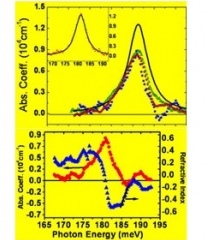 Gain-without inversion" goes a stage further, produciung optical gain without obeying Einsteins classically derived ideas baot population inversion.: The black/green/red/blue curves are the absorption spectra of an artificial atom sample in the presence of a control beam of progressively increasing intensity. By the highest intensity a gain feature appears, at a photon energy of ~187meV, even though the overall area under the peak tells us that >80% of the atoms are still in their ground state,|1>. At the same time the refractive index plot, the blue curve on the right, tells us that the light is slowed down to ~ c/40 in the amplifying region. 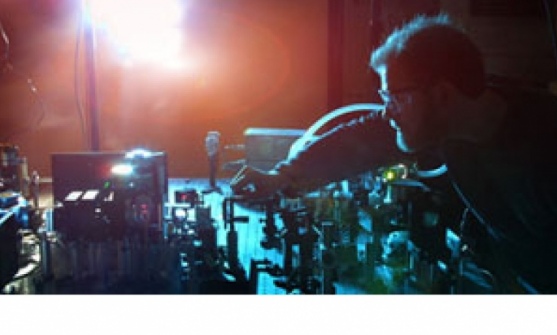 The special ‘OPG’ laser system we have built for our Quantum Optics Experiments. 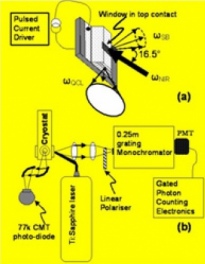 Over 90 years ago, Einstein proved his “Population Inversion” theorem,  i.e. that more than half the atoms in a laser needed to be excited before it could lase. He was assuming that the atoms were only weakly coupled to the laser light, and that they could also lose energy by radiating in random directions. Now we have engineered this coupling to be strong enough to make a new lasing medium, half matter and half light, and any energy put into it can leave only as laser radiation.

The result, for the first time, is a “thresholdless” laser that works even at the tiniest of drive levels. Its new metal-based photonic design can also instantaneously change an optical bitstreams’ wavelength in a way that promises to up internet capacity dramatically. 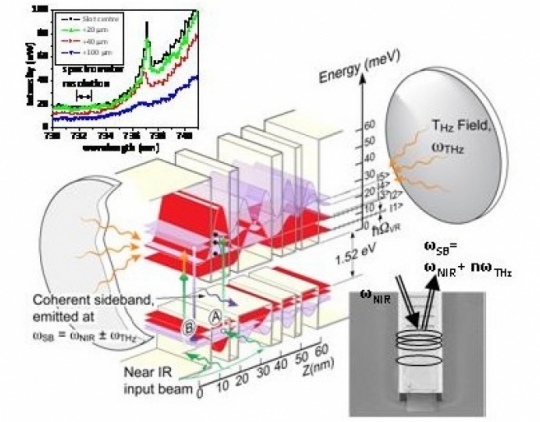 This work uses “Plasmonic” effects in shiny gold layers to squeeze light into a microscopic space, one that’s also full of tiny crystal nanostructures so small that we can use Quantum theory to design-in optical properties that are not found with natural atoms. The “Plasmonic” squeezing dramatically increases the coupling to the electronic transitions in the nanostructure.

Experimental laser setup for the QCL novel device programme. The green glow comes from a 5W lab bench laser used to generate the near IR bandgap radiation. The mid-IR radiation is generated by the QCL device itself , there are about 12 of them (each one is a gold stripe) on the tiny semiconductor chip on the right. 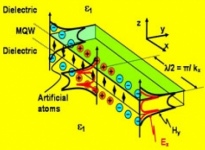 We are studing an entirely  new class of so-called metamaterials. They are made from semiconductor crystals which are structured at the nanoscale, in a way that allows us to design in electronic resonances using the theory of Quantum Mechanics.

At the moment, metamaterials use metal structures, with electromagnetic resonances engineered in on  length scale shorter then the wavelenght of the radiation where they''''''''''''''''ll be used. They generate such fascinating designer optical effects as cloaking, negative refraction (see box) , and perfect lenses, which can beat the diffraction limit to  imaging resolution. Our theoretical studies show that our new “Quantum Metamaterials” will allow us to make similar negatively-refracting devices and perfect lenses which  perform 100 times better than the metal-based ones. 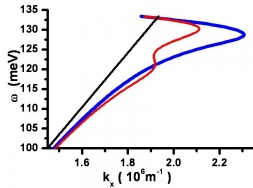 Left: Dispersion curves for a Quantum Metamaterial design, the negative gradient corresponde to light bending away from the normal, i.e. the "wrong way" when you make a prism out of it.

These new materials also promise a new class of "plasmonic" waveguide devices which give highly concentrated light fields ideal for compact optical circuits and for super sensitive chemical sensors. The extra versatility of our new Quantum Mechanical approach allows us to combine the advantages of these highly concentrated optical fields with very low propagation losses. Also the mode propagation can be controlled electrically and optically, both for the first time. This ushers in a new generation of active optical device concepts.

All of this is done with existing semiconductor fabrication technology. These devices will be easy and cheap to scale up in a manufacturing process, and they yield much higher and more reproducible device quality than is currently possible with metal based plasmonic designs.

To do all this we need be able to map out optical fields in the mid-infrared part of the spectrum, at sub-wavelength resolution. This will be achieved using the latest s-SNOM probe-based near field microscopy techniques which we will couple to a new tuneable IR laser, developed in-house.

As a spin-off benefit, this s-SNOM will open the way for a whole new range of high-resolution chemical mapping studies across the chemical, biological and medical sciences, and the laser itself will have applications in fields as diverse as industrial control, and environmental monitoring. 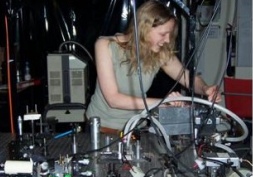 Most of the work uses home-built lasers and spectroscopy equipment developed to work in the spectral range where out "artificial atoms”  absorb and refract.

Angle-resolved reflectivity plot showing how the “artifical atom” transition, at ~1100cm-1, anticrosses with the plasmon line. The anticrossing energy is many times the linewidth of either transition, showing that we are well into the “strong coupling” regime.

For some years we have been using this to image samples of cancerus tissue. Essentially we take a number of phot's , at wavelengths that aree absorbed by the Phospate (in DNA) and the amide ( in proteins) chemical groups. It's known that when cell division is disrupted by the onset of cancer, this ratio changes, and now we have built a prototype that generates a computer image based on the change and are collaborating with IC cancer medice in Charing Cross on a medical trial. 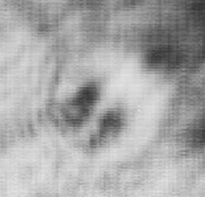 A diffraction limited image of a cancer cell in the act of division, with the dividing nucleus clearly visible at IR wavelengths where the DNA is absorbing. This image was taken in 1/10th of a nanosecond. 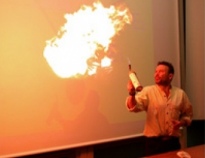 I see no harm in leavening serious lectures with dramatic stunts..

I strongly believe that we scientists have an obligation to the society that funds our work. One aspect of this is a feeling that we scientists should all be trying harder to make the happenings at the forefront of Scientific research both available and intelligible to the public at large. They paid for it, after all. Of course, in today’s media dominated world, the competition for peoples intention is intense, and as scientists we have to learn how present our work in ways which are compelling and relevant enough for people to notice us. This is not easy. The more I interact with scientific journalists and popularisers the more impressed I become at the talents they bring to the job that they do.

Myself I regularly perform show lectures to gatherings of teenagers around the country, at science fairs and school gatherings. These are primarily designed to tease their intellects with some of the more intriguing aspects of University Physics, but they are also spiced with a series of shameless stunts (fire breathing, dangerous demos, live music etc.) simply to make the day memorable. I host interactive discussion evenings in the Wellcome Institute’s DANA centre, where the public meet to debate controversial scientific issues, such as the threats and opportunities posed by nanotechnology. The central issue here is engagement, using the opportunity for dialogue to find out what the public really think, and to hear their concerns. I’d thoroughly recommend these evenings both to my colleagues, as an excellent way of engaging with the public, and to any non-scientists out there who may be suspicious of the way the science profession works. It’s definitely a 2-way process; the visitors seem to enjoy meeting real, practising scientists, and for our part we get to find out what the they think about us, and what we’re doing. Often this isn’t nearly as bad as the impression we get of our public image from reading the papers. 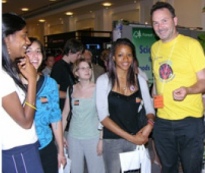 In 2006 we showcased our Quantum Optics Research at the Royal Society’s Summer Science Exhibition. Our “Invisibility at The Flick of a Switch” stand explored how we can use the principles of Quantum Optics to make solid objects disappear by shining a laser at them.

In 2006 our Quantum Optics research was selected to be showcased in the Royal Society’s Summer Science Exhibition. We spent 2 weeks, one in the formal splendour of the RS headquarters in London, the other in the sleek new Science Centre in Glasgow, explaining the mysteries of Light, Atoms and Quantum Mechanics to thousands of youngsters, teachers, journalists and VIP’s. If you want to know more, there’s a full record, including pictures and videos, at the Royal Societies own website. A lot of effort went into this, and along the way we spent quite a while being invited by communications professionals to think about how best to get our story across in the media. One result of this is that I am much more interested in talking with journalists than before.

I firmly believe that, as practising Scientists we have a duty  to make our work available and accessible to the Public at Large. 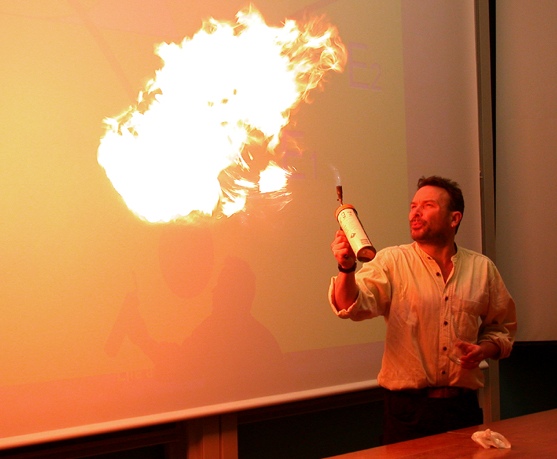 A bit of drama can help them remember the lecture...

Each year I do half a dozen or so Show-Lectures, at Science fairs, Schools Gatherings , College open days, The Royal Institution and suchlike. These occasions are designed to inspire as well as entertain, and in places they get shamelessly theatrical!

I also Work with the Dana Centre, and with the Science Media Centre, to promote rational debate and responsible media reporting on controversial topics, such as the thereats posed by nanotechnology.

I recently had the privilege of explaining Quantum Optics on TV to an all-time personal hero, John Cleese.

Heber,DJ, �Magneto-Optical Studies of InAs/InAlAs emitters for the mid-infrared region�

Poole,DPJ, "The Design and Characterisation of a Novel Hetero-nipi Reflector Modulator."