While most of Western society became increasingly comfortable with sex during the 1970s, evolutionary biologists started to find the subject very embarrassing indeed.  In two seminal books, George C. Williams and John Maynard Smith pointed out that the prevalence of sexual reproduction in nature poses a major problem for evolutionary theory.  The argument rests on the deceptively simple observation that males cannot produce eggs.  In theory, a population could grow twice as rapidly if investment in male offspring were eliminated and those resources were used instead to produce clonal females, each capable of independent reproduction via unfertilized eggs.  Such obligately asexual lineages, which arise relatively often, ought to invade and rapidly replace populations that are still burdened by the cost of making males.   However, in stubborn defiance of this logic, almost all animals and plants retain sex and males in some form, and obligately asexual lineages are typically short-lived in evolutionary time.  Evidently, sexual reproduction has selective benefits that not only outweigh its immediate costs, but are so fundamental as to make it practically indispensable in the long term.  The precise nature of these benefits remains unresolved despite forty years of theoretical and empirical inquiry, and is a perennial puzzle for curious evolutionary biologists.

I study a group of animals that provide an unusual perspective on sex.  Bdelloid rotifers are microscopic invertebrates, less than half a millimetre long. They can be found by the thousands in almost every freshwater habitat in the world.  Remarkably, every individual examined is female; bdelloids seem to have abandoned males and sexual reproduction tens of millions of years ago, and now reproduce exclusively via unfertilized eggs that hatch into clones of their mother.  In contrast to the prevailing pattern, these obligate asexuals have not gone extinct; indeed, they have diversified into four families, over a dozen genera, and hundreds (probably thousands) of species.  Apparently, some peculiarity of bdelloids has allowed them to avoid or greatly postpone the typical problems faced by asexual lineages, whatever these are.  Indeed, the exceptional success of the bdelloids may furnish important clues about the maintenance of sex more generally: an especially satisfying explanation would not only predict a very general benefit to sex, but specifically accommodate the ancient asexuality of this group as a special case.

My present work focuses on an idea known as the Red Queen hypothesis, which suggests that sex functions to break down genotypes that have become vulnerable to parasites and pathogens.   These ubiquitous natural enemies adapt relentlessly and rapidly to better infect their hosts.  They are therefore expected to cause considerable difficulties for asexual lineages, which are slow to generate genetic novelty to respond to changing selective pressures.  In principle, infections could suppress clonal populations so strongly that sex has a net selective advantage

despite its considerable costs.  If this hypothesis is correct, it would imply that the celibate bdelloid rotifers have some unusual alternative means of dealing with coevolving parasites.  To test this prediction, I am investigating their ecological and genetic interactions with lethal endoparasitic fungi (left).

Our April paper in PLOS Biology presents and compares new draft genomes for three bdelloid rotifer species, and contrasts these with an early genome assembly for the species Adineta vaga, published in 2013. It was especially interesting to look at the genomes of bdelloid species that do not tolerate complete desiccation, such as Rotaria macrura, shown here. The results seem to undermine some earlier predictions about the effects of desiccation-induced DNA damage on bdelloid genomes.  We also report a new genome in the genus Adineta, and we find that paired chromosomal segments are substantially less tangled and disordered than was reported in 2013. It remains to be seen whether this is a result of improved assembly techniques or genomic differences between species. All in all, the paper suggests we do not yet have a clear grasp on the genetic mechanisms at work in these bizarre creatures.  It was great fun to watch and wonder as this complex new dataset came in, puzzling over various unexpected patterns. Some of the complexities involved in genome interpretation are highlighted in a nice feature accompanying the paper. The work was led by my collaborators Reuben Nowell, Tim Barraclough and Chiara Boschetti, and I'd like to give a special mention to Pedro Almeida for dedicated labwork with tricky Rotaria specimens.

In February, I was interviewed for a popular BBC science podcast: The Curious Cases of Rutherford and Fry. I talked about the evolutionary problems with sexual reproduction, and of course I managed to bring the conversation around to bdelloid rotifers and their expected difficulties with virulent fungal diseases. In the second episode, I talked a bit about the evolution of males and sperm, which is perhaps a bit outside my area, given that bdelloid rotifers are not known to produce either.

In 2016, a surprising paper was published in the journal Current Biology. The authors reported that bdelloid rotifers of the genus Adineta "exchange DNA horizontally both within and between species", at incredibly high rates.

I and my colleagues at Imperial have prepared an extensive manuscript that evaluates the reliability of the data and findings in this paper. We have used the open access preprint server bioRxiv.org to make this evidence and analysis available for discussion ahead of the 2017 Evolution meeting in Portland, OR.

It is important to note that this issue relates to the specific 2016 paper mentioned above, which describes regular horizontal transfer of DNA from one rotifer to another.  It does not affect earlier, well-established findings that bdelloid rotifers encode an unusually high proportion of genes of non-metazoan origin, acquired over millions of years.


It's always great to see bdelloid rotifers featured in popular science, especially when the author writes as engagingly as Jules Howard, whose book 'Sex on Earth' was published by Bloomsbury in November 2014.  This exuberant account explores the eye-catching extremes of behaviour and morphology that animals adopt in pursuit of sexual reproduction.  In the case of bdelloid rotifers, Jules wondered whether equally extreme measures might be necessary for animals to do without sex entirely.  He visited me to investigate, as described in this abridged excerpt: 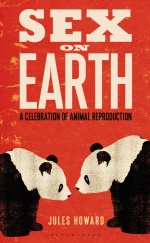 "I peer down the microscope - 'MAGGOTS!' my internal monologue screams, and I retch slightly.  I manage to translate this gargled noise into a calm rational observation which I put to Chris. 'Oh, goodness- they look rather like...like maggots,' I posit politely.

Looking at the bdelloid rotifers more closely I can see that I was wrong. They don't wriggle or crawl, but rather they loop - plopping their head against the ground, then pulling their tail forward - much like leeches.  And they do pause sometimes, much to my pleasure- occasionally they appear to glue themselves down with their tails, lunging their head from left to right instead - foraging, I guess.

Chris comes over and ups the magnification even more.  I peer back into the eyepiece and I have about three seconds to gawp at a close-up of a rotifer making its way across the field of view before it is gone.  This is more like it.  A glassy body containing everything one could ever need, a central line surrounded by bulbous bowls and rods.  In the very centre a pair of cushions grind rhythmically against one another. 'Oh my God, I can see its heart!" I exclaim. 'Well, actually those are its grinding jaws, crunching up the food,' answers Chris.  Like mallets pelting seeds, rotifers smash and grind the miniature life drawn into their mouths by the cilia.  Just as it passes out of view, I see them - those famous cilia - whirring around the two circles near the animal's head.

Nice as it is to see healthy rotifers, it's the diseased ones that are of particular interest here.  In 2010, Chris started to take the bdelloid rotifers to task, infecting lab populations of them with strains of deadly fungi and seeing what happened. 'My contribution is looking at the interaction between the rotifers and their parasites,' he explains, taking the agar plate from my microscope and making his way back to the fridge. 'You shouldn't see lineages that last tens of millions of years without sex, because what happens when a disease comes along?'  I get ready to answer but realise Chris is being rhetorical.  'A parasite would run riot,' he continues. 'It would spread and the population would be decimated.'  I picture the bdelloid rotifers like fields of monocultured crops in which pests are growing uncontrollably.  He ignores my glassy state and continues. 'The rotifers allow us to look at what, exactly, is going on when parasites arrive, and how they escape and can survive.'  He pulls himself away from the lure of the microscope for a second.  'Let me show you.'

Through the lens I see a different scene to the ones I have just been looking at.  There are no looping 'animalcules', as Henry Baker described them.  In the middle of the slide sits what looks like a rotifer-sized glass pillowcase, creased in the middle and trembling slightly.  If I look carefully I can still make out a few of the internal organs, but most of it is stuffed with what looks like tiny grains of milky popcorn.  'Is this a...rotifer?'

'It's a rotifer,' says Chris gravely.  'Infected with a fungus.' I notice another couple of rotifers in the corner.  They hang there motionless, like victims of a face-hugger from the film Alien: bags of life with no purpose other than to feed the sprawling parasitic life growing within.  'Eventually the rotifers rupture and burst, and the fungus spreads.'  They look incredibly sorry for themselves, these rotifers, cringing and wibbling slightly.  He shows me numerous slides like this, each like a silent battlefield.  Slide after slide shows bruised and battered rotifer bodies bloated with spores and gloop from infectious agents.  This is what happens to populations when they dabble in life without sex.  They get taken over. Without the genetic variation that sex affords, without mixing up the passwords, other life unlocks it, breaks in and runs amok.  It is a scene that has probably been played out numerous times in the history of life on Earth: animals and plants toying with asexuality, being pillaged by infectious agents, then going extinct.

Chris's experiments show what happens to bdelloid rotifers when left to profilerate on their own for long periods of time.  They are abused by infectious agents.  Yet the magic of bdelloid rotifers is that they're still here.  They persist, everywhere.  After millions of years they still remain.  So, what's their secret? "

To read more about Jules's encounter with the rotifers, and dozens of other sexual oddities, check out 'Sex on Earth'!