Current and previous projects are described below.

We have developed a new tool for estimating power and sample size for metabolomics studies. The approach is based on realistic simulations using pilot datasets, and captures the correlation and heavy tailed characteristics of typical metabolomic data. Work in collaboration with Benjamin Blaise and Goncalo Correia. See the paper. You can run the tool on the Phenomenal Galaxy site (see 'STATS'). In this collaboration with Dr Maria De Iorio, UCL, we have developed a Bayesian model of NMR spectra which aims to automatically deconvolve and quantify resonances of metabolites in complex 1-dimensional spectra of biofluids and tissues. We have released a publicly available R package called the Bayesian AuTomated Metabolite Analyser for NMR spectra (BATMAN).

BATMAN has an R-Forge site where you can download the package. Alternatively you can install direct from R by typing:

You can also read the papers in Bioinformatics, Journal of the American Statisitical Association and Nature Protocols.

With Dr Maria De Iorio, now at UCL, we developed a MATLAB program which is able to simulate realistic 1-dimensional 1H NMR spectra of complex mixtures of metabolites. The programme 'MetAssimulo' allows the user to specify the levels and variability of metabolites to be incorporated, and by default will simulate two groups corresponding to 'cases' and 'controls'. MetAssimulo can also simulate correlations within and between metabolites, as well as shifts in peak positions often seen in metabolic spectra. The picture below shows two NMR spectra of human urine. One is real and one is simulated. Can you tell which is which?

For more information please visit the MetAssimulo page or read the paper. 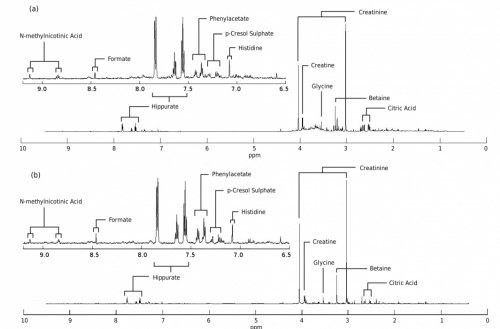 With Giovanni Montana (now at Kings) we have developed new techniques for time series analysis in metabolomics. Traditional time series methods require hundreds of time points and typically monitor just a few variables. In metabolic profiling, we monitor hundreds to thousands of variables over just a few (typically 3-10) time points. The plot below shows an example from our smoothing splines mixed effects (SME) model where the time course for two different groups of animals is being compared for a single metabolite. See publication.

With Hector Keun, Rachel Cavill (Imperial) and Ralf Herwig and Atans Kamburov (MPIMG, Germany) we developed new tools which allow researchers to interpret data from multiple omics experiments in a pathway context. The pathway approach allows a higher sensitivity and more global overview of the effects in a biological study and is particularly suited to integrating data from different levels of biomolecular organisation (e.g. metabolomics, transcriptomics) obtained in heterogeneous experiments. The figure blow shows a clustering of 118 drugs (rows) with hundreds of pathways (columns) indicating the overall pathway response of different cancer cell lines to drug treatment, as measured by metabolomics and transcriptomics. See the paper and the online tool IMPaLA.

A characteristic of omics data is that the individual measurements are highly correlated. That is, the level of a gene or metabolite tends to vary in a similar way to that of other genes/metabolites. These correlations can be visualised as a network in which correlated molecules are connected. The correlation network can be thought of as a new type of 'fingerprint' of the biological status of an organism and is therefore of interest in its own right. With Maria De Iorio (UCL) we have developed methods for analysing how correlation networks change in response to different biological conditions. We term these 'differential correlation networks'. The picture below shows which links in the blood lipoprotein correlation network are different between normal people and those with pre-diabetics symptoms. See the paper1, paper2 and paper3.

COMET Expert System: This figure shows a schematic of an 'expert system' constructed to help predict the toxicity of novel drugs. On the left NMR spectra of rat urine are shown (a,b), a model of normality is developed (c) over a time course (d). The right panel shows a similarity matrix comparing metabolic profiles from 62 treatments affecting the liver or kidney reflecting a high degree of organ specificity. See Ebbels et al.  J. Prot. Res. 2007.

LC-MS is one of the most widely used technologies in metabolomics and other bioanalytical sciences today. The measurement process is very complex and thus most methods for processing the data rely on heuristic approaches. With Andreas Ipsen we have developed a new model of LC-Time of Flight-MS, based on the physical ion counting process at the detector, which is able to model the data more accurately than ever before. The model has so far led to two applications: detection of co-eluting compounds and construction of rigorous confidence intervals on isotope ratios. Both of these applications help in the difficult task of identifying unknown molecules - one of the key bottlenecks in metabolomics today. The picture below shows the ion counts from two partially co-eluting species. The colours display the p-value from the new test indicating clearly that these two peaks do not co-elute. More details in the papers 1, 2, 3 & 4

Towards Solving the Grand Challenges of Computational Metabolomics, UK Conference on Bioinformatics and Computational Biology, Online, 2020

Data Analysis in Metabolomics, ECETOC - The European Centre for Ecotoxicology and Toxicity of Chemicals, Brussels, Belgium, 2016

Mathematical Tools for Integrating Metabolomic with Other Data, Metabolomics for biomedical research: where do we stand?, INSERM 214, Bordeaux, France, 2012

Chemometric and Bioinformatic Approaches to the Analysis of Metabonomic Data, HFL, Newmarket, UK, 2005

Chemometric methods for metabonomics in toxicology: Constructing an expert system for the COMET project, Scandinavian Symposium on Chemometrics 2003, Aland, Finland, 2003