The most recent Undergraduate Prize Winners. 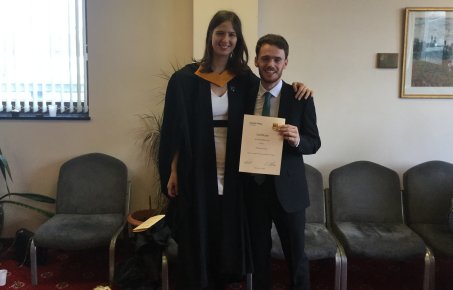 The Physics Department awards several prizes each year for excellence. These are official College prizes with values between £100 and £500. The award of a prize is listed on the transcript.

Abdus Salam Undergraduate Prize - This is an annual award to the best MSci graduate in the Physics Department. The prize winner is awarded a financial reward of £500. The Abdus Salam Prize is supported by the Ahmadiyya Muslim Youth Association.

Winton Prize - This prize is awarded annually for outstanding performance in second year physics. The prize winner is awarded a financial reward of £250. The Winton prize is supported by Winton, a global investment management and data technology company that uses the scientific method to develop intelligent investment systems.

Tessella Prize for Software - This is an annual award to two final year students in the Department of Physics for the most outstanding final year or Year in Europe computational project. Each prize winner is awarded a financial reward of £250. The Tessella prizes are supported by Tessella, an international analytics and data science consulting services company.

Ogden Prize- The Ogden Prize for Excellence in Communicating Physics is awarded to one student to recognise outstanding achievement in the Communicating Physics course. The prize winner is awarded a financial reward of £250. The prize is supported by the Ogden Trust, a charitable organisation that exists to promote the teaching and learning of Physics.

Callendar Prize - The Callendar prize is awarded to a final year student in the Physics Department for all-round excellence.

Dr Richard Learner Prize - This prize is awarded annually for excellence in the Second Year Laboratory.

Ludlam Prize - This prize is an annual award to an undergraduate student in the Department of Physics for excellence in the Atmospheric Physics course.

CMS Prize for Particle Physics - This prize is awarded annually to the student that obtains the best average mark in examinations that include particle physics as a subject.

Stanley Raimes Prize - This prize is awarded to a Second Year Physics student for outstanding performances in Mathematics in the first and second year of studies.

TTP (The Technology Partnership) Undergrduate Prize for Academic Excellence - The prize to be given to the student showing high performing academic excellence in Physics. Prize is only open to undergraduate students studying Physics.

Physics Prize in Memory of Adrian Murariu - This prize is awarded to an undergraduate student in any year in the Department of Physics for a significant individual contribution to original research in Physics.

Dr MC Black Prize - The Prize will be awarded to one or more final-year undergraduate students adjudged to have produced outstanding laboratory based practical work not involving substantial use of computers within the Department of Physics.

Find out about UG Open Days

Visit Flickr for photos of our events including project open days, and commemoration days