We do research on agile robot locomotion for bipedal and quadrupedal robots. Two strands of research in locomotion are pursued: bio-inspired and function-centric. The bio-inspired research focuses on emulating animal-like bipedal and quadruped locomotion, including walking, trotting, jumping and running. The second one, function-centric, investigates innovative design and control approaches for locomotion that are not necessarily trying to copy any biological counterpart, such as knee-less legged robots, parallel robots, etc.

We have several robots that we use to study locomotion: 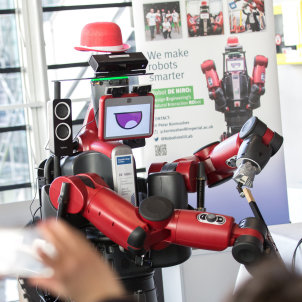 Our research is at the intersection of Robotics and Machine Learning

What can our robots do?

We are part of