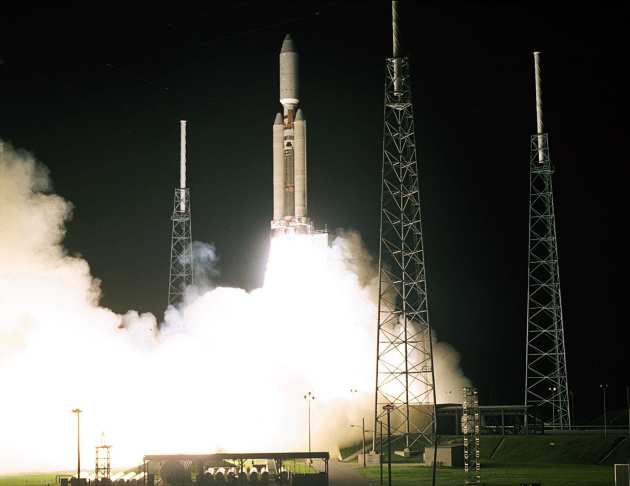 On the 15th October 1997, the Cassini spacecraft began its journey to reach and explore the planet Saturn, the sixth most distant planet from the Sun. The launch of one of the largest, heaviest and most complex interplanetary spacecraft ever built took place at Cape Canaveral Air Force Station, Florida using the U.S. Air Force Titan IVB/Centaur launch vehicle. The Titan IV initially used to launch the spacecraft, was followed later by the Centaur upper stage, which placed the spacecraft into an elliptical orbit around the Earth. Its fuel was finally used up to send the spacecraft on into a trajectory towards Venus, from where the planetary Venus-Venus-Earth-Jupiter Gravity Assist (VVEJGA) trajectory takes the spacecraft to Saturn.

In 1999, Cassini completed flybys of both Venus and Earth. The magnetometer boom had been retracted for thermal reasons since launch in October 1997 and now for the first time the local magnetic field could be observed relatively undisturbed by the magnetic field created by the spacecraft itself.  The main calibration goal for the Earth flyby was to cross-calibrate the Scalar Helium Magnetometer (SHM) with the Fluxgate Magnetometer (FGM). This was the only time that the spacecraft would be in a magnetic field strong enough to operate the SHM properly before arrival at Saturn. Both sensors worked correctly and initial results showed excellent agreement between them. The main science goals for the Earth flyby were to make detailed, and high time-resolution measurements of the Earth's magnetosphere, particularly in the tail and boundary regions. JGR have published an issue presenting the collection of papers detailing the results from the Venus and Earth flybys.

On 30 December 2000 the Cassini spacecraft made its closest approach to Jupiter on its way to Saturn. This flyby was necessary in order to give Cassini the final increment of energy needed to reach its destination of Saturn. During this period there were in fact two NASA spacecraft observing Jupiter. Galileo, which has been in orbit since 7 December 1995, was continuing its exploration of Jupiter's magnetosphere. Cassini on its flyby passed much further out, outside the magnetosphere on its closest approach of approximately 9.7 million kilometres (6 million miles) and well outside the orbits of Jupiter's four large moons (Io, Europa, Callisto and Ganymede). This was the distance calculated to give the spacecraft just the right gravitational assist needed for the final leg of its trip to Saturn. This event was the first time two spacecraft had been within the vicinity of Jupiter whilst simultaneously studying its environment. JGR have published an issue presenting the collection of papers detailing the results from the Jupiter fly-by. 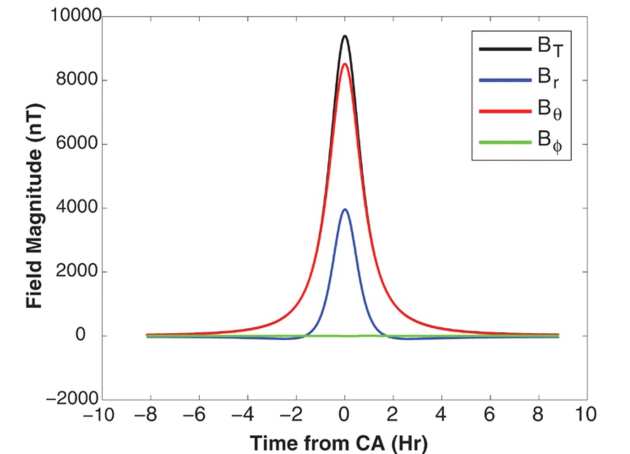 Having successfully arrived at Saturn, Cassini was able to resolve the internal magnetic field to a higher level of accuracy than ever before. Dougherty et al. (2005) discovered that the internal magnetic field was highly axisymmetric with only a minor tilt between its dipole axis and the rotational axis, a result that defies our previous understanding of dynamo action. The external current systems within Saturn’s magnetosphere were also discovered to be significantly different compared to the previous in situ measurements taken 23 years ago, hinting towards dynamical processes yet to be discovered! 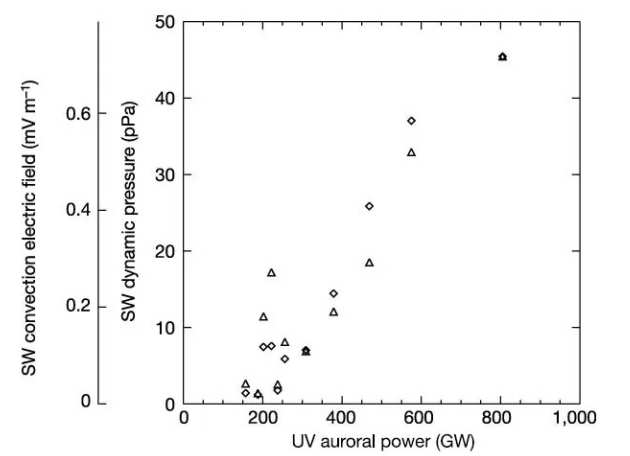 Cray et al. (2005) used continuous observations of upstream solar wind conditions by the Cassini magnetometer to show that Saturn differs to Jupiter since its aurorae are more responsive to solar wind conditions. However, it was also seen to be different to Earth since it has a weak dependence on the orientation of the interplanetary magnetic field. These results imply that Saturn is not simply the intermediary between Earth and Jupiter! 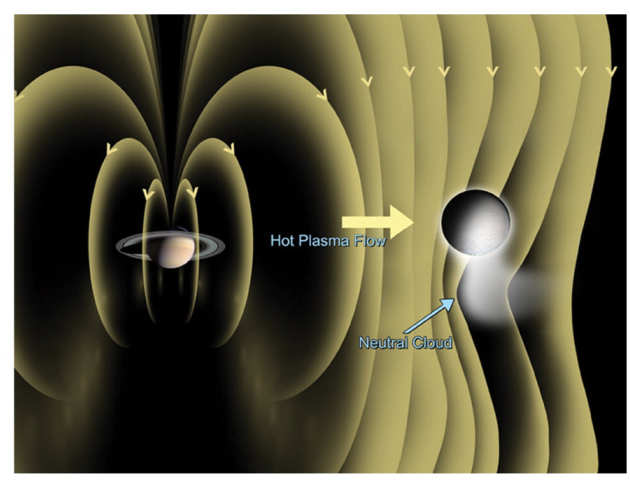 The discovery that Enceladus, a small, cold moon of Saturn, was active was one of the greatest discoveries by Cassini, let alone the magnetometer! A distant flyby followed by two closer flybys revealed the existence of plumes in the southern hemisphere of the tidally locked moon (Dougherty et al. 2006). Water vapour was seen to be leaking out cracks in the moon’s surface, called the ‘Tiger Stripes’, which later was revealed to be coming from a subsurface ocean that is 30-40km deep (Iess et al. 2014). The figure on the left shows how the magnetic field of Saturn is perturbed by the emissions from Enceladus and this was how the magnetometer was able to make this discovery!

Since there is no discernible tilt between the rotational and dipole axes, modulations of the magnetic field at the approximate rotation rate were not expected, as is seen at Jupiter. However, this phenomenon was identified in previous flybys of Saturn (Espinosa and Dougherty 2000) and early analysis of the Cassini data confirmed these findings (Cowley et al. 2006). This modulation feature can be seen in the magnetic field data shown on the right. These oscillations, called planetary period oscillations (PPOs) are a unique feature of Saturn’s magnetosphere and have now been identified in almost all magnetospheric observations. These presence of these modulations affect the dynamics and configuration of the entire Saturnian magnetosphere. 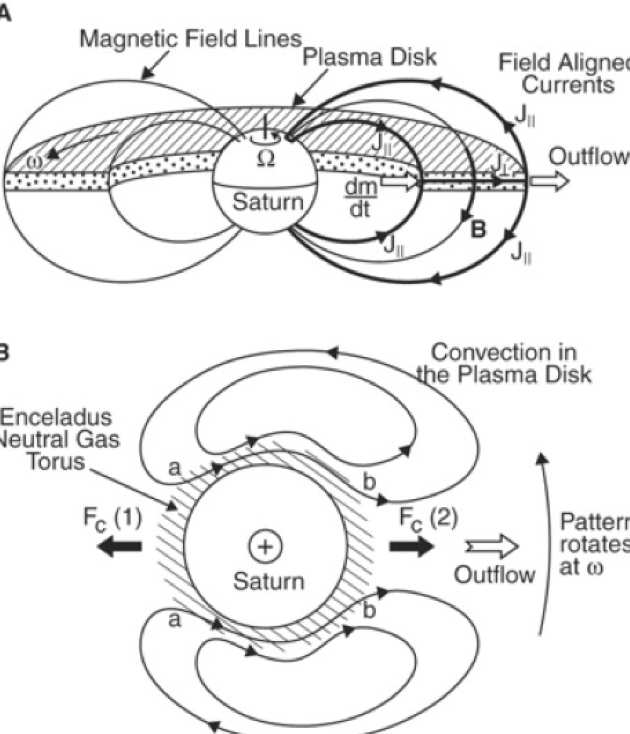 Saturn Kilometric Radiation has long been measured at Saturn to have a time variable modulation period, which has traditionally made it impossible to use this as a measurement for the planetary rotation rate. Gurnett et al. (2007) finds the source of this modulation to be from within the inner region of Saturn’s magnetosphere in the plasma disk, which is sourced predominantly by the moon Enceladus. This implies that SKR cannot be used to determine the rotation period of Saturn, as is done at other planets. 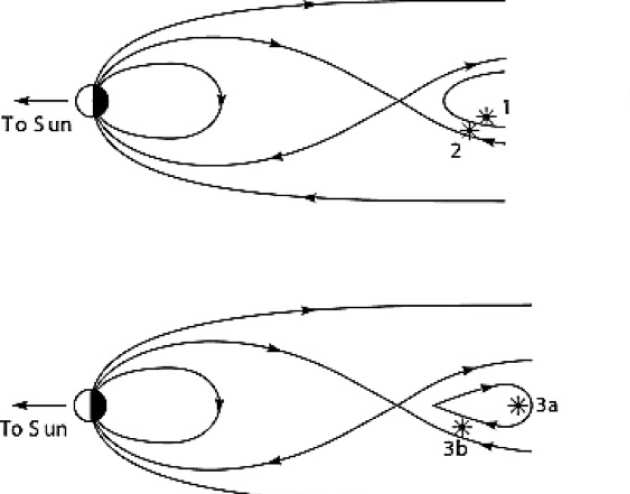 Previous flybys of Saturn had not shed any light on the expected reconnection processes that might occur in the tail of the magnetosphere. However, using in situ measurements Jackman et al. (2007) identified clear dipolarizations which are associated with reconnection, whereby some of the magnetospheric plasma is ejected as a plasmoid, and the rest is then accelerated towards the planet. This process is show in the figure on the right. These results show that Saturn's magnetosphere acts similarly to Earth's - solar wind interaction allows for mass and momentum to be transferred into the magnetosphere as well as plasma being lost to the solar wind downtail. 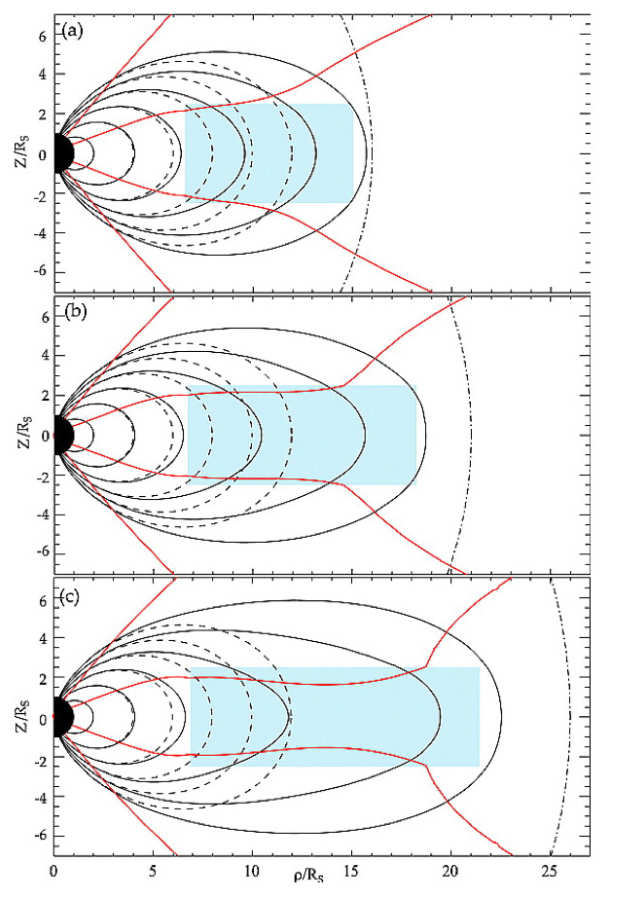 For the first time, the global magnetic field geometry of Saturn was identified to be strongly perturbed due to the presence of internally sourced plasma, primarily from Enceladus (Bunce et al. 2007, 2008, Arridge et al. 2008). Due to the rapid rotation of Saturn, approximately 10 hours, the plasma is equatorially confined and stretches the magnetic radially outwards into the characteristic ‘magnetodisc’ geometry. The presence of this structure on the dayside depends on external conditions, whereby the equatorial current sheet varies in size and strength under varying dynamic solar wind pressure. This can be seen in the figure on the left, where the current sheet, shown by the blue box, increases in size as the magnetosphere expands. 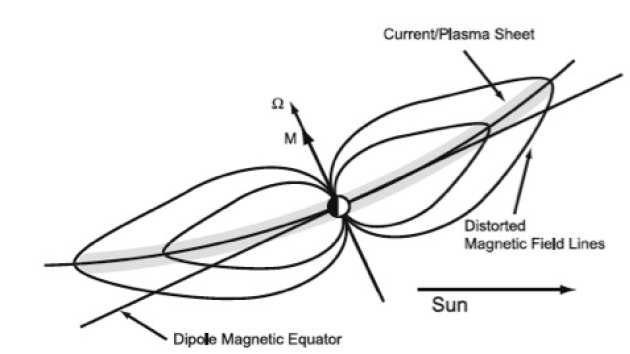 A strong seasonal dependence was discovered in the magnetic field geometry of Saturn due to its ~27o obliquity and small dipole tilt (Arridge et al. 2008). As the angle between the solar wind and Saturn’s rotational equator varies during a Saturnian year, due to pressure balance the magnetodisc current is puhed sheet out of the equatorial plane. It was southern summer at Saturn in 2008, resulting in the current sheet being pushed north of the equator, forming a bowl-shape around the planet, as can be seen in the figure on the left. 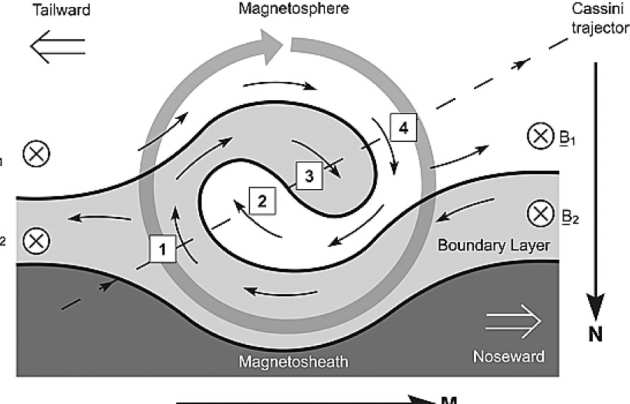 The first identification of a Kelvin-Helmholtz instability at Saturn was identified on the dayside magnetopause (Masters et al. 2010). If there is a large velocity shear between the external solar wind and internal plasma flow, and the local magnetic field is perpendicular to the flow, instabilities are able to grow and can propagate along the magnetopause flanks. The fields essential roll up in a vortex-like configuration as seen in the figure on the right, which can result in reconnection, allowing solar wind plasma to enter the magnetosphere. These results have significant implications for our understanding of how energy and momentum is transferred into Saturn’s magnetosphere. 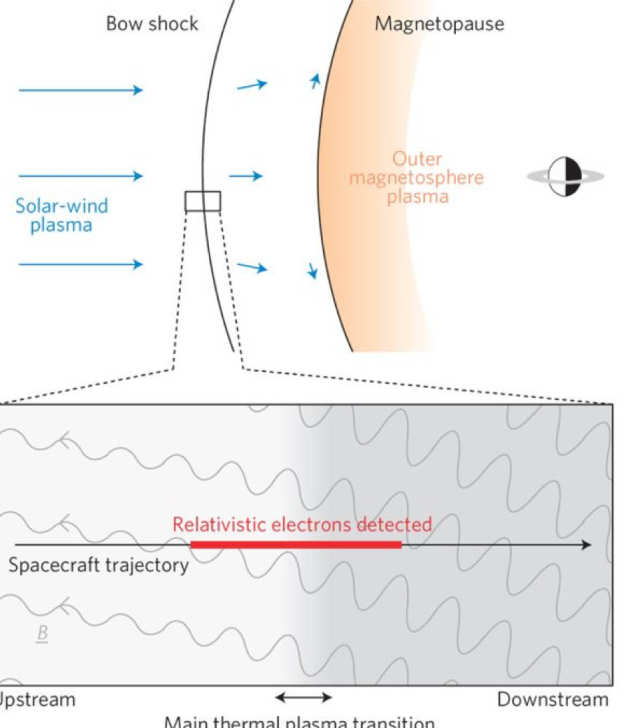 The first in situ measurement of solar wind electrons being accelerated to relativistic energies (~MeV) under quasi-parallel magnetic field conditions was identified at Saturn’s bow shock, a boundary between the magnetosphere of Saturn and the incoming solar wind. The event is shown in a schematic on the right. This contradicts the previous assumption of the required magnetic field topology for this scenario to occur, and these measured energies were some of the highest ever recorded due to shock acceleration (Masters et al. 2013).

For the first time, Titan was measured outside of Saturn’s magnetosphere, interacting directly with the supersonic solar wind (Bertucci et al. 2014). The results appeared similar to the interaction between other unmagnetized bodies and the solar wind, such as Venus and Mars, despite the different interplanetary magnetic field environment in the outer solar system. Due to the planned orbital trajectory of Cassini, there was no possibility of another flyby of Titan under these conditions and so this is the only recorded event of Titan outside the magnetosphere to date. The magnetic field data from this event is shown on the right. 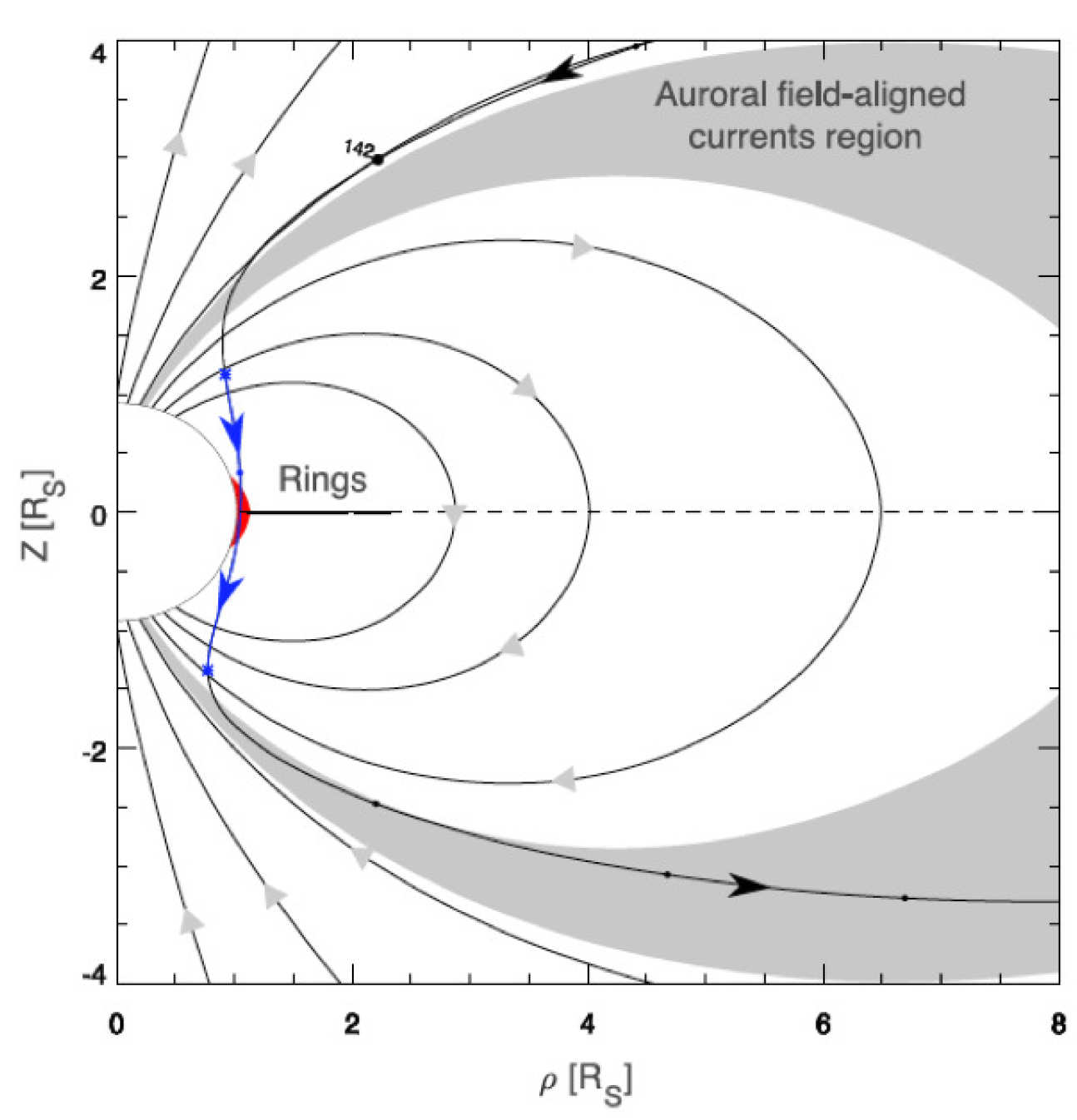 The Grand Finale was one of the most exciting, daring manoeuvres a spacecraft has ever performed. Diving between the innermost ring and Saturn’s cloud tops, as shown in the figure on the right, allowed for the highest resolution of the internal magnetic field to be determined (Dougherty et al. 2018). The internal field is a window into Saturn’s deep interior structure and dynamics and so the Grand Finale was essential for understanding the dynamo region of Saturn. It was discovered that the dipole tilt was even smaller and the magnetic equator offset was even larger than previously thought. The axisymmetry of the field might possibly be due to differential rotation in a layer above the dynamo which essentially filters out the nonaxisymmetric components of the internal field. A complete explanation of this unique feature of Saturn is still not fully understood.

Reconnection has been frequently observed on the nightside of Saturn when the magnetodisc current sheet becomes significantly thin. However, Guo et. al (2018) revealed for the first time a direct measurement of reconnection occurring in the dayside magnetodisc. This event is shown in the figure on the right. This research provides compelling new evidence for drivers of transient phenomena on the dayside of rotationally dominated magnetosphere, relating to auroral pulsations and injection events.

Whilst they are the most identifiable feature of Saturn, the rings have not previously been included in discussions of the magnetosphere. However, during the Grand Finale, it was discovered that the rings and the ionosphere are in fact connected through a weak but not insignificant current system (Khurana et al. 2018). The signature due to these currents was found to be variable between the Grand Finale orbits, revealing this connection to be highly dynamic (Provan et al. 2019). The signatures were divided into 4 distinct categories and the currents associated with these cateogries are shown in the figure on the right.