The purchasing and installation of large items of equipment by the Centre, to improve UK capability in fabrication and modelling of structural ceramics, is now almost complete. All equipment is available to the UK ceramics community – please contact  Garry Stakalls  if you wish to use any of these facilities:

A 4.5 l capacity freeze-dryer and vacuum pump was bought and installed in the ceramics lab. It is a FreeZone 4.5 Liter Console Freeze Dry System.

As it comes with a range of associated sample flasks, the freeze-dryer expands the range of ceramic processing equipment available.

The high temperature nanoindenter manufactured by Micro Materials is located in the Structural Ceramics laboratory on the lower ground floor of RSM, to make use of the better control of air temperature and reduced vibration level. As well as being fully instrumented, the nanoindenter operates at temperatures up to 750 °C. Usage of the nanoindenter is high, and results obtained have been reported at international meetings.

Further computational capacity has been added to CASC’s multiprocessor server, which is being used to carry out new simulations to investigate the hysteresis, observed by CASC experimentalists, in the nanoindentation response of MgO. Three dimensional crystal plasticity simulations of nano-indentation of MgO are being carried out using parallel processing and the additional computational capacity of the CASC cluster. The relation between primary and secondary slip system activation and the hysteresis, which has been successfully simulated, is being investigated; the contour plot shows an overhead view of the indentation and the activation of a given slip system within the crystal. By relating the accumulated shear strain on the active slip systems to the indentation load versus depth response, the observed hysteresis behaviour can be explained by the simulations and the deformation behaviour of MgO can be understood. 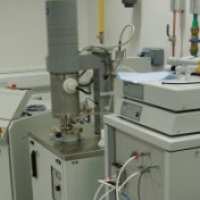 A suite of high-temperature thermal analysis equipment from Netzsch has been installed in the Department of Materials, in a basement room that was converted specifically for this use. The equipment comprises:

Netzsch have provided multiple training sessions, and all three items of equipment now run over their full temperature range. The facility is heavily used internally and attracts external users. Further developments will include a wider range of materials on the Laserflash.

The high-temperature mechanical testing equipment from Instron has been installed in the newly-refurbished laboratories in the Mechanical Engineering Department. One frame has been refurbished and incorporates a vacuum system and a furnace from Materials Research Furnaces Inc with a maximum temperature of 2000 °C. The second frame has induction heating up to 1200 °C. Control hardware and software has been updated.

FactSage version 6.1, together with three substance databases, has been purchased from GTT Technologies. A multi-user license for phase equilibria software has also been purchased from the American Ceramic Society. This thermodynamic calculation software is available over the network to anyone in the CASC offices.

With funding from DSTL, CASC ordered a vacuum furnace from Thermal Technology. The furnace heats a volume 5 cm diameter and 15 cm tall to temperatures up to 2500 °C under vacuum or a mixture of gasses. Opposed viewing ports allow observation of the sample during heating, and a sample elevator and cooling chamber allows exchange of samples whilst the furnace is at temperature. The vacuum furnace  shares a room and services with the vacuum hot press. 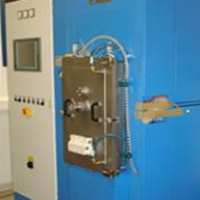 The vacuum hot press from FCT Systeme operates at temperatures up to 2500 °C and at atmospheric pressure as well as under vacuum. The maximum force is 250 kN, and the pressed volume is 8 cm diameter and 10 cm tall. 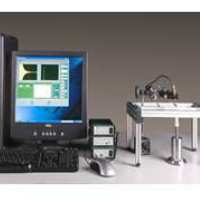 Early May 2013 saw the installation of a new piece of equipment for determining the Young and shear modulus and Poisson ratio of materials. The measurement principle is based on the relationship between shape, density and stiffness and the natural vibration frequencies of a sample. For example, for determination of the Young modulus, typically a bending vibration mode is excited by hitting a sample supported on the nodes of the vibration with a small projectile in the centre. The resulting vibration is picked up with a microphone and analysis of this signal using the Fourier transformation yields the frequency of the vibration. The software also analyses the decay in amplitude of the vibration with time to determine a value for the damping of the vibration. The model installed at CASC comes with a furnace capable of operating to 1750 °C in air or inert atmosphere and hardware and software enabling fully automated excitation and measurement, making it possible to investigate the variation of the elastic properties with temperature but also to characterise transitions in the materials behaviour from the changes in internal damping of the vibration signal. Some examples from the literature of phenomena giving rise to damping are the glass transition temperature, the hopping of oxygen vacancies bound to dopants in response to stress at low temperature in doped zirconia, and the softening of grain boundary glassy phases in sintered silicon nitride.

All this CASC equipment is supported by processing and characterisation facilities in the departments of Materials and Mechanical engineering, as well as in Imperial College generally. CASC researchers make particular use of adjacent electron microscopy, xray diffraction, thermal analysis and surface analysis facilities.